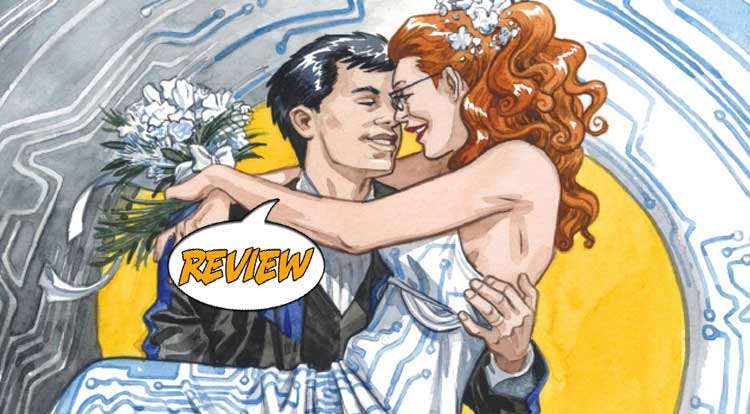 When the dome came down in Gotham City, Nightwing and Oracle were considering matrimony.  But first, she’s going to get her mojo back by busting some Thanagarian heads…  Your Major Spoilers review of Convergence: Nightwing/Oracle #2 awaits!

Previously in Convergence: Nightwing/Oracle: Dick Grayson and Barbara Gordon have had very different years.  He has been active as Nightwing, defending his city and fighting the good fight, even after his mentor seems to have stopped.  She, on the other hand, has felt herself withering on the vine, depressed by the existential blah of having her entire city imprisoned.  When he asked her to marry him, she said no.

And that’s when the dome fell, and warriors of planet Thanagar began attacking their city…

As the story opens, swarms of Aborbascon drones have begun striking Gotham, while an alternate (and very conquer-y) Hawkman and Hawkgirl bring the battle to Nightwing.  Even after a year, Nightwing’s skills are still up to the task, and he is very clever in his tactics, what with being outnumbered and outgunned.  Oracle gets in the action as well, with her own Bat-Copter (looking quite a bit like the 1966 movie version) allowing her to confront Hawkgirl in the air.  Gail Simone’s script is all about the heart and soul of the characters, getting inside their heads and doing a good job reminding us what was coolest about the pre-Flashpoint universe.  While she and her would-be fiancée fight the bad guys, a shrouded spectre provides back-up from her clock tower, working feverishly on something computery and obviously strategic…

WITH A SPECIAL GUEST-STAR

I have to admit, I was a little surprised to find out that it was Black Canary working backup (not that it’s surprising that Oracle and Black Canary are still tight after a year in prison, but that Black Canary isn’t really a computer type), and when Canary’s powers turn out to be part of the plan, it’s a nice moment.  Interestingly, the issue ends with our heroes pulling a brilliant stratagem (albeit one that was a bit telegraphed, thanks to the inconsistencies as regards Telos’ motives and resources thus far in Convergence) and it ends with a sweet moment: The wedding of Nightwing and Oracle.  Aside from a brief line about an earthquake, there’s no reference to the overarching plot at all, which is both a positive and a negative.  One the one hand, it’s awesome to get the closure for characters who never got any, but on the other, the repeated worry that the series has no coherence or lasting repercussions are still fresh in my mind.

All in all, though, it’s a character-driven show, and on that basis an enjoyable one, with brave Nightwing, clever Oracle, night guest-stars and nefarious villains, all wrapped up with a little emotion and a lot of love for the DCU.  Convergence: Nightwing/Oracle #2 may or may not be indicative of the greater crossover, but it works on its own merits, earning 3.5 out of 5 stars overall.  I don’t know how this whole thing will wind up, but this particular miniseries was pretty okay…