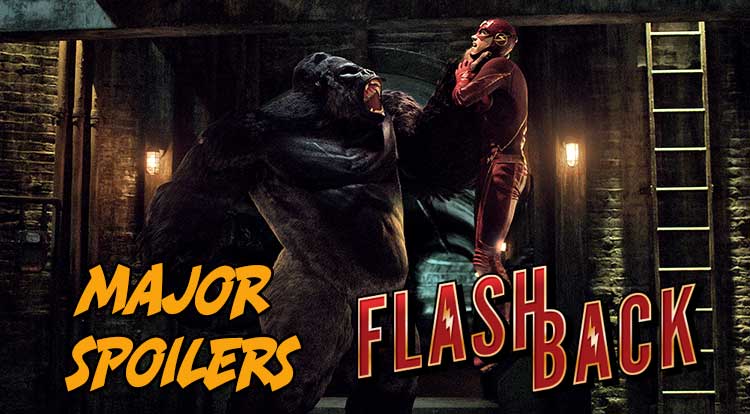 Big apes, a yellow speedster, and big trouble for Barry Allen. It’s all part of this week’s Flashback, as we take a deeper look at the things you saw (or maybe didn’t) in this week’s episode of The Flash.

Barry deals with the latest threat from the Reverse-Flash; Dr. Wells distracts the team by releasing Grodd on the city; Iris and Barry have a serious talk.

Though it isn’t a Barry Allen power, during Mark Waid’s run on The Flash, Linda Park served as an “anchor” for Wally West when he became lost in the time stream/speed force. Wally could focus on Linda and find he way back home or out of trouble any time. Grodd has been teased time and time again in the Flash going all the way back to the pilot episode. So who is Grodd?

He’s a big giant gorilla who first appeared in Flash #106 in April-May, 1959, the same month that this episode aired… crazy, right?

As a super intelligent telepathic gorilla, Grodd has had the ability to control the minds of others, which has caused quite a few problems for the Flash over the years. Grodd and his tribe weren’t always hyper-intelligent, though. A radioactive meteor crashed in Africa a long time ago, evolving Grodd, Solovar and others into a society of gorillas that built advanced technology and they hid themselves away from the rest of the world in the cloaked Gorilla City. Grodd eventually sees his life’s goal to take over Gorilla City, and then move on to the rest of the world. Luckily, Barry Allen and the rest of the Justice League put a stop to Grodd’s plans, and the world is safe. Well, except for that time when Grodd successfully turned everyone into apes, and we had a month of DC Comics featuring ape and monkey versions of all the heroes. Because Grodd origin in the television series is the result of scientific experimentation, I don’t think we’ll see Solovoar or the rest of Gorilla City appear in the series.

Probably the biggest tidbit of information regarding Grodd and the Reverse Flash has to do with an origin of Professor Zoom:

He is responsible for crippling the Flash’s friend Hunter Zolomon, resulting in his transformation into the villainous Zoom when Hunter tries to change the event so it never happened. Hunter would often think about how Grodd used him as a plaything in that fight while talking it over with the Flash.

POPULAR HELD BELIEF: It is believed that when you put a monkey or ape on the cover of a comic book it sells more copies, which may be why there were so many simian comics during the Silver Age.

FACT: In the Justice League Animated Series, Gorilla Grodd was voiced by Powers Boothe. You may remember Boothe from such wonderful roles as Senator Roark in Sin City and Sin City: A Dame to Kill For, a member of the World Security Council in The Avengers, and as the sinister Cy Tolliver in HBO’s Deadwood.

David Sobolov voices Grodd in this week’s episode. You can find Sobolov next playing Drax the Destroyer in the Guardians of the Galaxy animated series coming later this year. General Wade Eiling makes his return again this week (gosh I sure do love Clancy Brown). At one point in the comics, Eiling gained regenerative powers after he transferred his brain patterns into the indestructible body of The Shaggy Man.

Eiling is also responsible for forming the Ultramarine Corps, a government sponsored superhero group who were supposed to be more official than the Justice League. of course with Eiling going all insane later in the JLA series, the Corps became independent of the government. A good deal of time is spent talking about Eiling’s super solider project in this episode, and now that it is revealed he knows Barry is the Flash, it wouldn’t surprise me to see Eiling and the Ultramarines become a recurring problem for those heroes.

I THOUGHT THAT LOOKED FAMILIAR

Last week, we saw Barry sport a pair of Captain Cold’s glasses, and this week another bit of villain apparel finds its way onto Barry Allen. In the comics, Grodd uses a helmet to take control over larger groups of people at a time. Though it isn’t an exact match to the one we saw on screen, the helmet Barry wears to protect himself from Grodd’s psychic attacks is a very close match.

Most of this week’s episode focused on Iris West’s reaction to finding out everyone has been lying to her about the identity of The Flash. Still, there are a few bits that stood out A.R.G.U.S. – The Advanced Research Group United Support is brought up this week as Team Flash try to piece together what happened to Eiling. In the Arrow series, the unit is dispatched to hung Nyssa al Ghul and they are the organization behind the formation of Task Force X.

In comics Argus is something else entirely. During DC’s Bloodlines event, undercover policeman, Nick Kelly was transformed into someone who can disappear into the shadows and see everything on the light spectrum.

Evan Gibson – The article about Nora Allen’s death is written by Evan Gibson. In comics, Evan is a reporter for the Star Gazette in Star City.

Time Travel Paradox – In an earlier episode of The Flash, Barry is seen hanging a copy of the paper from the day his mother was murdered. Look closely and compare it to the newspaper seen in this episode. Everything is identical EXCEPT the picture of Nora Allen on the front page.  Did Barry’s short trip through time have bigger repercussions than we know about? Booster Gold – Okay, this one is a bit of a stretch and is a bad pun, but Wade Eiling is seen wearing a gold mask while stealing gold. Another word for stealing? Boosting… Boosting Gold… Booster Gold?