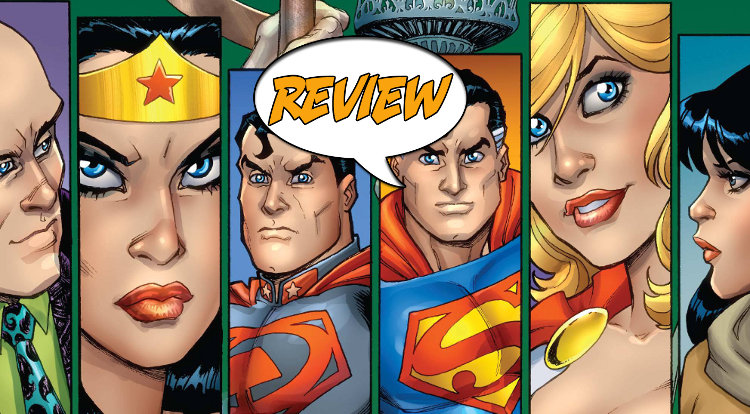 “IT WOULD BE NICE TO HAVE A NORMAL NIGHT”

While most of the Convergence books have focused on one bit of continuity at a time, Convergence: Action Comics #1 splits the difference between the pre-Crisis Earth 2 Superman and Power Girl in Metropolis and the Red Son versions of Superman, Wonder Woman, Lex Luthor, and the original Man of Steel himself, Josef Stalin. Justin Gray’s Convergence title is a bit of an odd duck. Similar to this week’s Convergence: Justice Society of America #1, it looks at the hardships of life under the dome. But whereas the JSA title used the Convergence framework to paint a sensitive portrait of the hardships of aging, in Action Comics, Power Girl is bummed because she’s gained fifteen pounds under the dome.

It’s almost a non-sequitur. Almost every other issue of Convergence has taken pains to point out that under the dome, fresh food is scarce, if not non-existent. In other Convergence titles, people are literally killing each other for scraps. This makes Power Girl’s complaints about an over-abundance of pasta insensitive at the very least. Over in Red Son Moscow, due to some contrivance Lex Luthor is in town when the dome goes up, allowing him the chance to antagonize Josef Stalin to his face while ostensibly investigating the cause of the dome with Superman. It is a plot that has no meaning for the reader. While the characters certainly care about the dome, by the fourth week of Convergence, every reader knows that the dome is going to drop by issue’s end, so why spend pages on Lex’s possible theories about it? These Convergence stories are two issues long, which means they need to be as taut as possible. There is too much wasted space in Convergence Action Comics #1.

“WHAT IF WE’RE STUCK HERE FOR THE REST OF OUR LIVES?”

The weak script is not helped by the art. A sequence where Power Girl muses about her lost power loses its effectiveness when Claude St. Aubin chooses random action for the panels rather than matching them to the narration. There is a rushed feeling to the art, as well. While St. Aubin brings his best on his depictions of the rococo Soviet interiors, in other places the backgrounds are without detail, seeming incomplete. Lovern Kindzierski’s coloring and shadowing adds some depth to the pages, but the uneven quality of the art overall is still a problem.

BOTTOM LINE: NOT WORTH THE TIME

Convergence: Action Comics #1 is one of the weakest entries in the Convergence line-up. The plot details are either incongruous with the rest of Convergence or are rendered inconsequential by the climax we’ve already read in every other Convergence issue. While fan favorite characters from Earth 2 and Red Son populate these pages, there’s little to recommend it even to die-hard fans of those guys. It’s a missed opportunity.