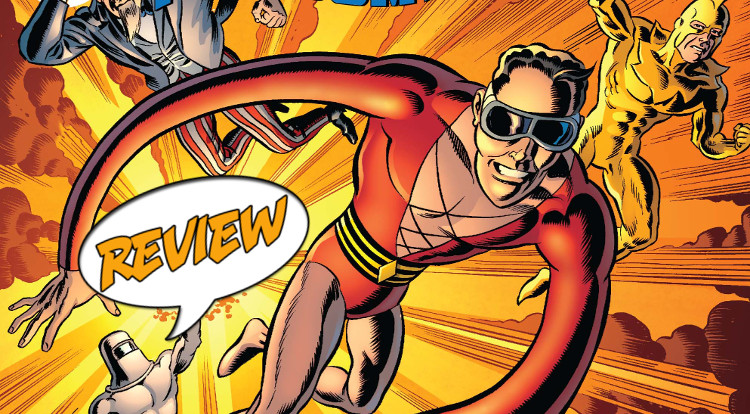 If you’re anything like me you’ve been waiting for Plastic Man to make a big appearance in his own book for quite a while now.  Actually, I’m sure almost no one has been wanting that except me or we’d have gotten it by now.  What we do get is Plastic Man in a Convergence tie-in (with some other guys…)!  Is it enough to satiate the need for one of the best, most ridiculous heroes ever?  Read the review to find out! Previously in Convergence: If you hadn’t heard, there’s an event going on in the DCU where cities from different universes and times have been captured and put under domes.  The being responsible, Telos, wants champions from each city to fight to see who is the strongest.  This means we get to see some superheroes fighty fighty…

I’M NOT SURE THIS JIVES SO WELL

It has been pointed out numerous times already (thanks Stephen!) that Convergence appeals only because of the nostalgia factor.  Personally, I don’t have much connection to the stories or time periods that Convergence has focused on but I have been drawn to certain characters.  Plastic Man has always struck an odd chord with me and I remember watching his horrible cartoon as a kid.  It’s been a long time since I’ve seen him in comics and I’m the first to champion a Plastic Man ongoing.  When Convergence: Plastic Man and the Freedom Fighters was announced, I knew I’d be buying it.  How could I not love it?  It’s got Plastic Man, as well as some guys I know nothing about!

John McCrea’s artwork gets the job done but it seems middle of the road and not what I would expect from him.  Faces remind of Mad Magazine art which isn’t a bad thing, just a unique style.  He does what he can with the material he’s given but since it’s an exposition heavy story, there isn’t much on display.  Even with the amount of action, none of the characters get a big chance to shine with the exception of Plastic Man.  Even then, there isn’t much in the way of fun zaniness.  The end has a few funny panels when the hero’s powers return.  Plastic Man stretches his ears out of his head and the breakout panel is a great team shot, with Plastic stretching and curving around them.  In the end, just like the story, it’s average artwork, making for a decent yet forgettable issue.

BOTTOM LINE: NOT SURE WHO THIS IS FOR

If you love Plastic Man, I encourage you to contact Stephen on social media or in the comments.  We did a Wonder Woman week last year and I would love for Plastic Man to at least get a day to be recognized.  And let’s be honest, there probably isn’t enough material to cover a whole week.  Help me out Spoilerites!