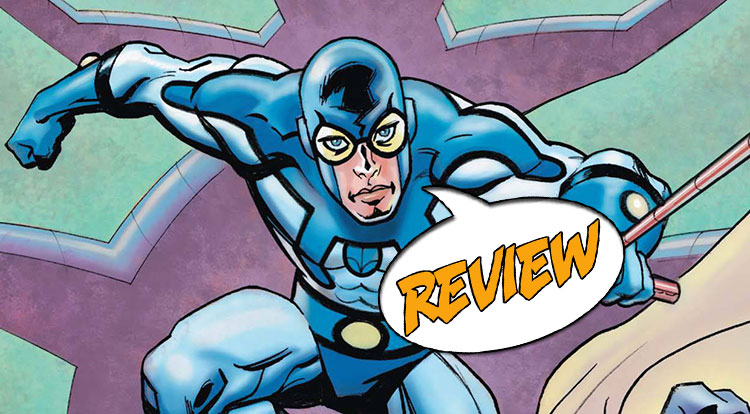 How do you attract the old school comic readers? Bring back characters from Earth-4! Previously in Blue Beetle: Hub City is a cool place. You have Ted Kord, Captain Adam, and Vic Sage running around doing their thing. The of the Charlton Comics characters continue, but set in an alternate Earth that existed before Crisis on Infinite Earths! (We’re going back, back, back, back, back)

While elements of Earth-4 were tweaked to work in the Watchmen series, this story kicks off with something right out of Les Miserables. Resources are low, rationing is getting out of control, and some citizens of Earth-4 can’t take it anymore, and are barricading the streets demanding the government take its boots off their neck. If you’ve seen the musical, you know what happens when Captain Allen Adam uses lethal force against protestors.  Vic Sage is there to capture the moment for his television show, but tends to shrug off the incident in a very weird way, providing Captain Adam goes with him to Kord Industries to see Ted’s latest attempt to crack the dome.

Of course it doesn’t work, but the sudden appearance of pre-Flashpoint Booster Gold, who is bouncing around from city to city due to an accumulation of chronal energy, gives Adam his powers back temporarily.  Booster Gold and Blue Beetle have had a long history with one another, so having this issue tie-in closely with Convergence: Booster Gold is to be expected, but the two stories are so disjointed to begin with, if you haven’t read Booster Gold before this issue, you are really going to be confused.  Booster appearance becomes even more crazy when he is only there as a tie-in moment, where nothing major happens, and the POOF!, he’s is gone three pages later.

I’ve mentioned before that there is not a lot of continuity going on between issues and the main story, and this is especially true when a building suddenly transforms into Telos, who proceeds to tell the heroes they must fight with one another, just before the dome goes down. DC is moving toward canon over continuity, but if the publisher wants us to read all of the issues, continuity is going to make a few people question what is going on, not only with the series, but with the publisher.

Though there are some weird things happening in the flow of the story, the manga-esque art by Yishan Li is very cool. Though it doesn’t go completely into the territory of the Batmanga series by Jiro Kuwata, there is a distinct artistic direction in this book that sets it off from the other Convergence books I’ve read. I really want to see more of Lin’s work in other series, but if this is the only book I get, then I’m happy with what I’m seeing here.

BOTTOM LINE: YOU NEED TO BE ALL THE WAY IN

At this point, there are two ways you can approach the Convergence event; 1) go all the way in and love every minute of it, or 2) turn off your mind and just go with the flow.  I’m going with option two for now. The art is wonderful, and if you have been dying to read some Earth-4 Charlton Comics, this issue will be right up your alley. The tie-in with Booster Gold is very different from what we’ve seen in other books (save the New Teen Titans), which may add to the confusion for any new readers.  Don’t get me wrong, the story is fine, the art is great, but new readers are really going to need to pay attention to the Convergence origins info in the back of the book.

You're either all in or your aren't

The art is wonderful, and if you have been dying to read some Earth-4 Charlton Comics, this issue will be right up your alley.