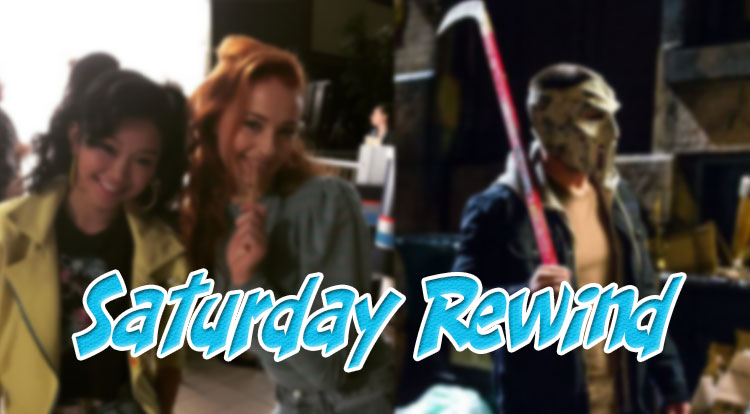 Saturday Rewind: Jean Grey and Jubilee go to the movies

As Avengers: Age of Ultron kicks oft summer this weekend, many films started production that we will be excited for next year. Get a glimpse of X-Men: Age of Apocalypse now! It’s the Saturday Rewind.

Bryna Singer started production on X-Men: Age of Apocalypse earlier this week and decided to treat us all to a look at Jean Grey and Jubilee. Game of Thrones’s Sophie Turner as Jean and lana Condor as Jubilee look straight out of the 80’s in their outfits.

Could the pair be buying their tickets for Return of the Jedi in this scene? We don’t know, but this other picture from Singer shows that the film up on the theater marquee. Amell isn’t the only new face you should be looking for in the Dave Green directed sequel as Will Arnett, Tyler Perry, Brian Tee and Laura Linney have also joined the cast.

The sequel for the not too well received reboot to the Turtles comes out June 3, 2016.

Watch the beautiful trailer for Kahil Gibran’s The Prophet

It’s not often that you see a trailer for an animated film and immediately think “Oscar winner” but that is exactly what I though halfway through the trailer for Kahil Gibran’s The Prophet. Starring voice talent from Liam Neeson, Salma Hayek and Quvenzhané Wallis with nine different directors all being over seen by The Lion King director Roger Allers this film looks incredibly special.

GKIDS proudly presents Kahlil Gibran’s The Prophet, a stirring animated adventure based on the worldwide bestselling book.Set in a Mediterranean sea-side vil…

The film is held together by the story of the poet Mustafa but the film looks to take off with the different segments done by the list of directors in differing styles. I have never heard of Kahil Gibran or his work The Prophet, but after that trailer I’m going to have to make myself familiar.

Sundance surprise Tangerine has a trailer

One of the most talked about films coming out of Sundance this year was Tangerine. A large part of that comes from that fact that film was shot almost entirely on an iPhone. Yes, an iPhone

The biggest takeaway from Tangerine has to be that equipment should never hold anyone back from creating. A solid story will trump a $15,000 camera everyday of the week.

Tangerine comes to theaters July 10th, hopefully soon followed by a digital release because I’m not holding my breath for a theater within a 2 hour drive of the Major Spoilers HQ to be playing this.

Let me know your thoughts on these stories and whatever else happened in film this week down in the comments. Make sure to listen to the review of Age of Ultron on Zach on Film and read Chris’s written review!