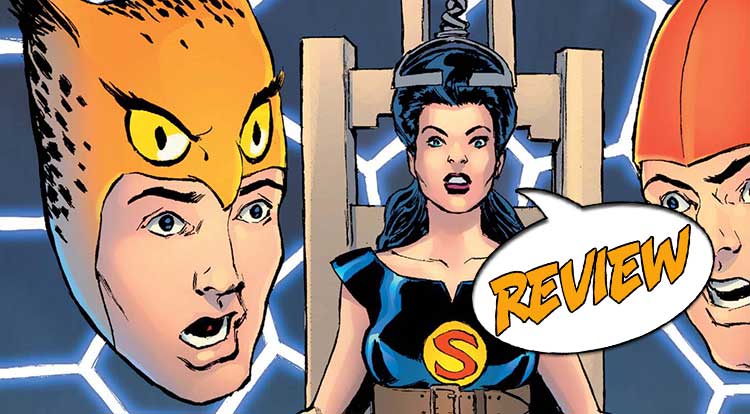 Pre-Crisis Crime Syndicate? What kind of mayhem will they bring to the Convergence party? Major Spoilers reviews the newest title from DC Comics’ big event. Previously in Convergence: Another week, and another step back in the history of DC Comics, this time featuring the adventures of characters from before The Crisis on Infinite Earths.

A GOOD STORY RUINED BY CONVERGENCE

While a reverse Justice League team is interesting, and it has been for decades, the Crime Syndicate members are still the bad guys. Though they aren’t the uber powered Earth-2 team whipped up by Grant Morrison in his series, nor the Crisis on Two Worlds animated movie, their crimes shouldn’t go unpunished. That’s the way it works, right?

As this issue opens, the long arm of the law has caught up with Superwoman, and she’s about to be executed on the electric chair. The remaining depowered members of the Crime Syndicate hatch a not to great plan to break her out. It’s interesting to see Lois reflecting on her life of crime and her justification for her actions. It’s also refreshing to see her recognize that she is the one that is in the wrong.

Convergence: Crime Syndicate #1 is the second book I’ve read this week that makes great use of parallel story telling. The second story readers are presented with are the final days of the Justice League from 83rd century Metropolis. The team remains in hiding, away from Luthorians who are hunting them down. As happens time and time again across the Multiverse, Superman and Batman are about to come to blows over ideology, and just when the action heats up, the domes come down.

The story telling for both worlds is well done, and though I care little for either team, the writing and character development is so well done that it is easy for readers to become invested in the characters. If the story had been allowed to continue naturally, the resolutions would have been very satisfying. Instead, Convergence gets in the way.

With an evil team and a good team tossed in the arena, it comes as no surprise that Ultraman strikes first. Interestingly, the place the teams must fight is called The Battleground. This only jumped out to me, as next week, Marvel’s big Battlewolrd launches, and like Identity Crisis/Identity Disc it seems like one publisher is taking a poke at the other. Or maybe not, as one really can’t determine the intent or the write beyond what is presented on the page and our initial interpretation of it.

I MISS ADAM CAROLLA AS ULTRAMAN

To me, the visual interpretation of Ultraman in comics has always looked a heck of a lot like comedian/podcaster Adam Carolla. This week’s cover image had me hoping the style would continue inside the book, but alas, the cover and interior art don’t match. Still, I really enjoyed the visual elements in this book. Wether it is the goofy grin on Johnny Quick’s face, the grim determination of Batman, or the evil intent on the Luthorians faces, the art is a real treat.

Likewise the inking and coloring has a distinct change when jumping from pre-crisis to 83rd century. Phil Winslade inks his own work, so seeing light lines for the Crime Syndicate and a darker tone/shading for the future world gives each a unique look and shows Mr. Winslade’s mastery of his craft.

Until the final pages, Convergence: Crime Syndicate #1 is a good read. Seeing repercussions of actions and decisions play out over the course of a year under the dome makes for good drama. Having the dome go down with the expectation that everyone needs to kill, is less interesting to me. It may be too late in the game to reclaim pre-Crisis fans, but this issue is well written, and the art is wonderful, so it is worth checking out.

It may be too late in the game to reclaim pre-Crisis fans, but this issue is well written, and the art is wonderful, so it is worth checking out.