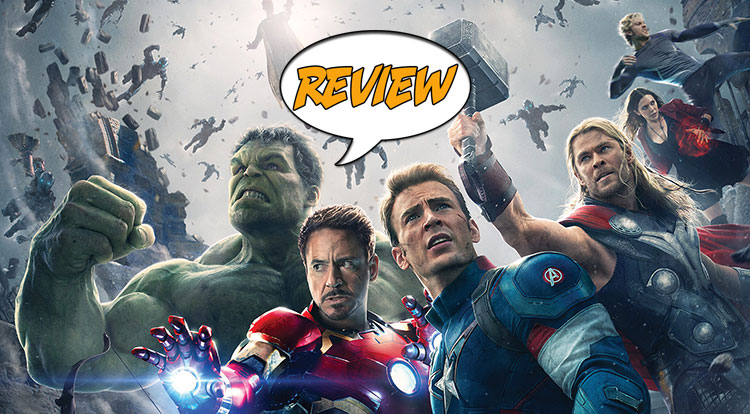 The wait is finally over.  Avengers: Age of Ultron has arrived and this reviewer went to an early screening.  Enough jibber-jabber, let’s get to the review!  (WARNING! MAJOR SPOILERS AHEAD. It is the name of the website after all…) Previously in the Avengers: After stopping the alien invasion led by Loki, the Avengers went their separate ways.  With the Tesseract in safe hands, everything seemed peachy keen.  It’s not…

SO THAT’S HOW YOU TAKE DOWN THE AVENGERS

The following review may mention plot points that have already been rumored, confirmed or otherwise.  I keep myself away from as many spoilers as possible, not reading articles and only watching the first two trailers (because we know how Marvel likes to show the whole movie don’t we Zach?)  I went into this pretty fresh and feel that made my viewing experience all the better.  So, is it possible to top the original Avengers movie?  Yes and no, but I know I enjoyed this one more.

The opening action scene is a great kickoff, showing the Avengers working together to infiltrate a Hydra base and retrieve the stolen Loki scepter from Baron von Strucker.  Each character gets awesome spotlight moments and the camera moves throughout the sequence are clever, giving the appearance of one continual shot.  Joss Whedon’s quirky, snappy dialogue is as present as ever and it’s cool to see the heroes interact, quipping back and forth.  What’s great about this movie is we’ve gotten the setup and now get to see a team who has spent time working together as a whole.  Wanda and Pietro Maximoff are twins that have been experimented on by Strucker and given powers, making them villains for the majority of the movie.  After retrieving the scepter, Tony Stark and Bruce Banner discover that inside is a highly advanced type of A.I.  Stark convinces Banner they should use it to create Ultron, an ultimate machine/robot that could protect the world so the Avengers would no longer be needed.  Of course there’s no way this could go wrong.  I liked that Tony continued to use his technology in ways that made sense following the end of Iron Man 3.  Instead of making numerous armors, he has created the Iron Legion, a group of Iron Man robots that aid the Avengers in their missions.  Once Ultron becomes alive and self-aware, he kills J.A.R.V.I.S. and takes over the robots.  The party scene shown in the trailers is fun, with a great joke involving Captain America moving Thor’s hammer and its dark turn after Ultron’s arrival made it even better.  Things spiral out of control from there, as Ultron takes over the internet and Stark’s tech in an attempt to bring about peace by wiping out the Avengers, then later humanity (more on that weird plan later).

The strongest part of the movie is Ultron himself, voiced wonderfully by James Spader.  He’s not completely evil and wants to kill humans but honestly thinks he may be doing the right thing.  His thinking is flawed because he can’t comprehend exactly how humans work, but is convinced they will wipe themselves out.  Spader gives Ultron personality, at times frightening but mixing in some of the Tony Stark style humor.  It works and makes sense considering Tony is his creator.  What makes Ultron a better villain than Loki is that he’s able to take down the Avengers and not in the way you’d think.  By manipulating Scarlett Witch and Quicksilver to work with him, he has Wanda show each member their ultimate nightmares.  Black Widow is haunted by her past, Iron Man sees himself responsible for killing the team and Thor has an awesome vision that will lead into Thor: Ragnarok.  As things pick up, Ultron eventually wants to create a more human body, which I’m sure you can figure out leads to the creating of the Vision.  It’s a darker movie than the first and I enjoyed seeing the Avengers have a huge challenge to face, one they might not make it out of.  Action scenes come fast and furious and do a great job of being unique as well as fun.  The climax has devastation on a scale that easily rivals its predecessor and I’m interested to see where the next movie will go, especially with the addition of some new members.

Needless to say, special effects and CG are heavy throughout and the majority of them look good.  Unfortunately there are some that look sub par which was surprising given the giant blockbuster movie it is.  Most of the problems I have are when actors didn’t mesh with their surroundings and were clearly in front of green screen.  The Cap and Ultron fight atop a moving truck suffers the most, with both characters looking “fake” for lack of a better term.  Unsurprisingly, the standout action piece is the Hulk vs. Iron Man battle.  Seeing the Hulkbuster armor do the wild things it does made me smile ear to ear, especially what I call the “rock ’em, sock ’em robot arm.”  The end sequence is jam-packed with action to the point of sensory overload.  When the shot slows down to show the team fighting hoardes of Ultron robots there is almost too much taking place to fully comprehend.  I also liked how Scarlett Witch moved like a ghost out of a horror movie, twitching about and it was a great choice.  The largest success in CG is Ultron himself.  The team who worked on him deserves major credit for creating a CG robot character that emotes so well.  When Ultron listens to Pietro and Wanda’s tragic childhood story, you can see the empathy on his face.  Facial expressions match the dialogue and Spader’s delivery perfectly, adding to the character and assisting in making him a great villain.  For the most part it is all great stuff and sure to entertain.

The story does have its share of problems, though some are personal preference.  Ultron’s reasoning behind his plan is a bit shaky and it’s not until the end when he loses everything that his plan shifts to something truly evil and sound in reason.  I found some characterization off, especially Tony and Hawkeye’s.  At the end of Iron Man 3 it seemed that he planned to stop being Iron Man, but none of his doubt is addressed.  While the Vision is supposed to be the Avengers big trump card to defeat Ultron, his use at the end feels minimal.  The biggest misstep in character is with Clint Barton and the revelation that he has a wife and kids.  This was extremely unexpected and I don’t feel went with the wise guy rebel that I know Hawkeye to be.  The romance between Black Widow and Banner is nice but at times predictable and the way it is left at the end was disappointing and brief.  The excitement of seeing all the characters in one movie has diminished and is a big drawback to Age of Ultron, which will no doubt take away the high viewers had at the end of the first movie.  The mid credit sequence is enough to make up for it.

Now to the big to do: the death of one of the characters.  I don’t know how much has been revealed or leaked about who dies but the speculation and hype surrounding it were majorly blown out of proportion.  If you’re thinking that any of the main players are the one to go, you’re in for a major disappointment.  You could say the character was an Avenger at the time but it’s as close to a lie as you can get.  MAJOR SPOILER: Hint, you will be able to see your character in another franchise if you love them, albeit differently.  END SPOILER.  For all the hype, the death is a cop out and elicited an “Aww” from some audience members, not in the good way.

BOTTOM LINE: AS FUN AS THE FIRST, MINUS THE NOVELTY

While the novelty of seeing our heroes together in one movie has worn off, Avengers: Age of Ultron is still wonderfully fun and enjoyable.  Whether it is better than the first is ultimately up the viewer but I would say it is.  James Spader as Ultron is a terrific villain and I felt was more of threat to the team than Loki.  The action is as big as ever, with some great set pieces and destruction.  While some of the story has problems and there are a few effects shots that could be better, it’s nothing that ruins the movie and will barely stand out to most moviegoers. The audience I saw it with had a blast and there were multiple cheer worthy moments.  Avengers: Age of Ultron is a must see in theaters and I highly recommend it.  Did you see it?  How did it strike you and did it meet expectations?  Feel free to comment below or tell me how wrong I am. :)

Age of Ultron may have some problems, but is a blast to watch. With a great villain and awesome action, it is arguably better than the first.

Age of Ultron may have some problems, but is a blast to watch. With a great villain and awesome action, it is arguably better than the first.