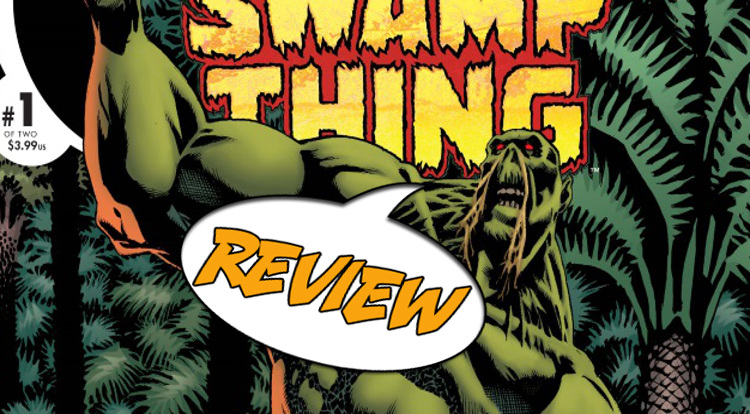 The Convergence continues as DC characters are forced to live in cities trapped under domes without their powers.  We’ve seen how the dome affects powers like Superman’s, but what about a character like Swamp Thing?  What happens when his connection to the Green is severed for a year?  Find out in the Major Spoilers review of Convergence: Swamp Thing #1! Previously in Swamp Thing: Alec Holland died in the swamps after a lab accident and was reborn Swamp Thing.  After being killed by the Sunderland Corporation and dissected by Jason Woodrue the Floronic Man, it was discovered that he is really a plant who thought of itself as a man.  With the help of the woman he loves, Abigail Arcane and Swamp Thing unearth the remains of Alec Holland and lay them to rest.

A TOTALLY DIFFERENT KIND OF TIE-IN

I was pretty psyched to see Len Wein returning to write Swamp Thing but hesitant because it was a Convergence tie-in, miniseries thing.  My expectations were surpassed because Wein manages to craft a Convergence title that is not only good for fans of old Swamp Thing, but is accessible to new readers as well.  A big complaint I’ve had about all the Convergence titles has been that the history of the characters is put in the back.  One would think sticking it in the front of the issue would help make the reading experience more enjoyable for a newcomer.  Len Wein tackles this obstacle by writing the Swamp Thing’s history into the beginning of the story.  Not only does he succeed in catching the reader up but he does it in five pages, using little space and leaving enough for the meat of the story.  From there it gets even better as we see how Swamp Thing must live in the year under the dome.  While I’ve felt the few Convergence books I’ve read glossed over the year, Swamp Thing focuses heavily on it.  After traveling to Gotham to try to find Batman because of his worry about the red skies, his connection to the Green is severed and he slowly begins to wilt.  Literally.  It’s something I never thought of and it was extremely cool.  The city’s season is changing and Swamp Thing along with it, but the plant life is slowly dying due to the cutoff by the dome.  Seeing a dying, dried up Swamp Thing that must be given plant food and covered in fertilizer by Abigail was not only horrific, but sad as well.  Wein keeps the story focused on Swamp Thing as he lives in Gotham Central Park but manages to still convey what is going on in the city and how things are breaking down. Food and plant supplies are rationed and Abigail is forced to find a job and place to live.  While Wein thinks of nice concepts and addresses issues that living under a giant dome would cause, he glosses over some story points, making things seem too convenient.  Swamp Thing feels “compelled” to go to Gotham and while it is argued that it is the Green calling him, the reasoning is never explained and feels like an easy way to get the two to Gotham.  Abigail easily finds a job at a flower shop, a place to live, and is able to sustain it for a year.  Small potatoes but I still took issue with them.  Next issue looks like the action will heat up as Swamp Thing will be fighting vampires but I hope it is more than a giant battle.  Still, I’m excited and can’t wait for Vampire Batman to show up.

No doubt Kelley Jones has an incredible original and strange style that is absolutely perfect for a Swamp Thing comic.  It plays to his strengths with hulking monsters and deep shadows.  Swamp Thing’s body mass shifts in proportions and his face and body parts change, such as sticks and leaves forming on different areas of his body.  Jones uses great cinematic angles and his layouts are wonderful as well.  There is a very creepy tone that permeates and has a giant horror vibe.  Unfortunately that horror applies to his human characters and not in a good way.  I was unable to find a consistent face on characters and there are eyes that look like they’re sliding off, much like a Salvador Dali painting.  There is a child that appears to be about forty years old and it’s quite unnerving.  Batgirl shows up and not only has an odd-shaped head but unhealthily large breasts.  I love Jones’s work but don’t remember it having some of these flaws.  I’m still very happy with how the issue looks and even though there are jarring elements, much of it works and is perfect for Swamp Thing.

BOTTOM LINE:  A BRILLIANT LOOK AT SWAMP THING’S YEAR UNDER THE DOME

Convergence: Swamp Thing #1 knocks it out of the park in both story and art.  Len Wein tells a story that addresses what would happen to Swamp Thing if he was cut off from the Green for a year and brings up things I never thought of.  It manages to get across what is happening in Gotham while only focusing on Swamp Thing in Central Park.  Kelley Jones provides his creepy and wonky art that is perfect for a Swamp Thing comic, despite some flaws.  For a Convergence tie-in, this one is a sure winner and worth checking out.

Convergence: Swamp Thing #1 knocks it out of the park in both story and art and provides a unique look at Swamp Thing during a year with his connection to the Green severed.