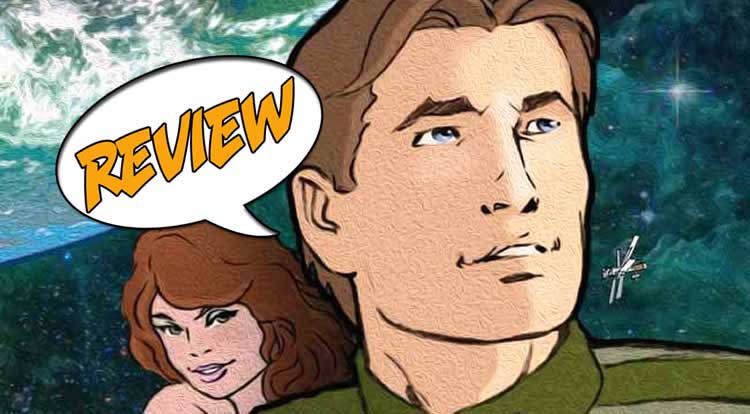 Robert A. Heinlein’s Citizen of the Galaxy #3 of 3 Review

I always love it when a novel or short story is converted into the comics format. That’s because those forms of storytelling usually have a clear beginning, middle and end. Comics, on the other hand, often have ongoing storylines that go for years (sometimes even decades) at a time. That’s because comics are a habitual medium – the company and creators want you to buy their product each and every month!

Not only that, science fiction often deals with subjects comics tend to avoid. This series, basic on Robert Heinlein’s classic novel from 1957, shows that excellent tales, especially those set in an unfamiliar time or setting, can still speak to us today.

Previously in Citizen of the Galaxy: “Just outside our galaxy, the atrocities of slavery thrive, until an orphan finds his destiny in this interstellar action/adventure coming-of-age tale!”

This story focuses on Thorby, a boy we first see being sold into slavery. He’s purchased by an older man who has lost a leg and appears poor and destitute. The good thing about Baslim, his owner, is that he looks on Thorby more as a son, so he begins to train and educate him, all the while concerned that it will make him dissatisfied with his status in life.

We follow the young boy as he grows into manhood, when he discovers that all the knowledge and experience he gained under Baslim’s tutelage becomes really important when he discovers just who he is! So, education can be helpful no matter who or where you are!

It’s interesting to watch Thorby move from one level of society to another, from lowly slave to the upper echelons of civilized society. He also grows from street thief to respected member of society, learning how important morals can be.

The script for this series does a good job of drawing us in and make us relate to the various characters, be they an apparently cross father figure or a high-society figure unfamiliar with life outside her circle of life.

I liked Baslim quite a lot, though he’s not present in this final issue. This is Thorby’s time to shine, as he implements what his mentor has taught him.

One of the great things about sci-fi is that it can talk about social issues and suggest solutions ahead of its time. Even though the original novel was written decades ago, its anti-slavery message still speaks to us today, especially given the sexual slavery of young adult women and men that’s become the focus of news and law enforcement today. I wish more people could read this comic because it shows the wrongness of “possessing” another human being against their will.

Of course, this book also refers to slavery in other forms as well, which I really enjoyed!

Although I would have liked more detail in the artwork, I still found the expressions on character’s faces easily readable and the action sequences clearly understandable.

I particularly enjoyed the outside sequences, including the one where Thorby is flying up to Rubdek City. Good coloring and fascinating landscapes helped make me feel like I was actually there with the main character. Great work!

I highly recommend this miniseries to anyone who enjoys science fiction, social commentary or a story that ends! How odd is that in today’s comics universe!

My hope is that this will be collected into a hardcover or softcover edition for those who may have missed the previous issues. However, all three issues are available digitally, so anyone interested in reading the entire story can go that route if your local shop is out of previous issues.

Of course, you could also, dare I say it, go to your local library to check out and read this story in book format. Me, I prefer the visual version I find in comics, but it’s such a good tale that the words won’t get in the way!