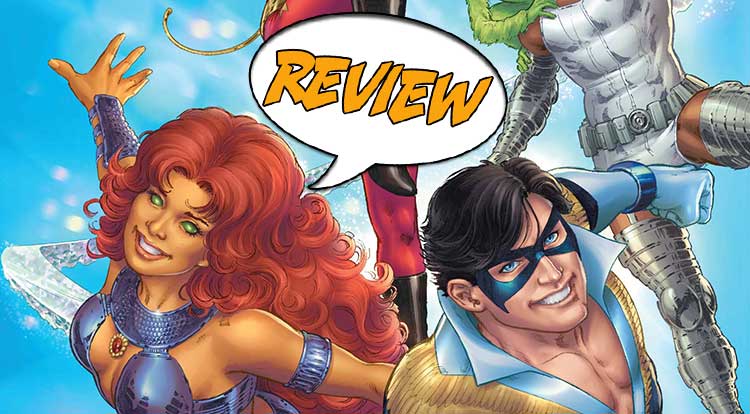 The Pre-Crisis and Tangent universes take the spotlight this week in DC Comics’s Convergence event, and that means some of our favorite characters are back including Nightwing, Cyborg, Starfire, and the rest of The New Teen Titans. Previously in New Teen Titans: Oh, man… it was the ’80s, Dick Grayson had left Batman behind to become Nightwing, Terra and the Titans had a rough patch, and teenage romance was in the air. Then the Anti-Monitor arrived.

It’s so good to see Marv Wolfman back on the title that he made famous. I feel like DC did something right by tapping Marv write this book. Sure there is a huge nostalgia factor in this book, but for the older crowd – and let’s face it, only older readers are going to be into the New Teen Titans – this seems like old home week. There have been major changes that have occurred since the Pre-Crisis Gotham City went under the dome, most notably the marriage between Dick and Kory, attempted budding relationships, and Vic’s struggle with his powers starting to fail him. Meanwhile the Doom Patrol in the Tangent Universe city are trying to get back to their own timeline.

Then the dome goes down, powers reactivate, and Doom Patrol takes on the New Teen Titans. Expect, instead of page after page of fighting and punching, the initial attack slows, and both parties retreat understanding that fighting isn’t the best way to achieve what each team wants.

I really like that while there is aggression in this story, it is interpersonal conflict between couples and teams, and not the all out desire to kill, kill, kill! I also like that the end of the issue has “enemies” reaching out to one another; for what I do not know, but Mr. Wolfman created an ending that has this book on my “Must Read Next Month” list.

I like Nicola Scott, and think she is a real talent. However, there are times when faces look really weird, and become somewhat frightful to me. Still, the dramatic action poses, thoughtful layout, and the ability to bring real emotion to the faces of characters who are missing their loved ones, make the issue so engaging.

One of the problems with teen heroes turning into adult heroes is that the drama can get a bit overwhelming. While the stories that were told in the ’80s were very good, and full of high drama, it was a bit of a let down for pre-teen me. With over 30 years between Crisis on Infinite Earths and Convergence, I’ve grown, and reading this issue was a real treat, and actually makes me wish this team would stick around in the New 49. Convergence: The New Teen Titans #1 is really worth checking out this week.

With over 30 years between Crisis on Infinite Earths and Convergence, I've grown, and reading this issue was a real treat, and actually makes me wish this team would stick around in the New 49.