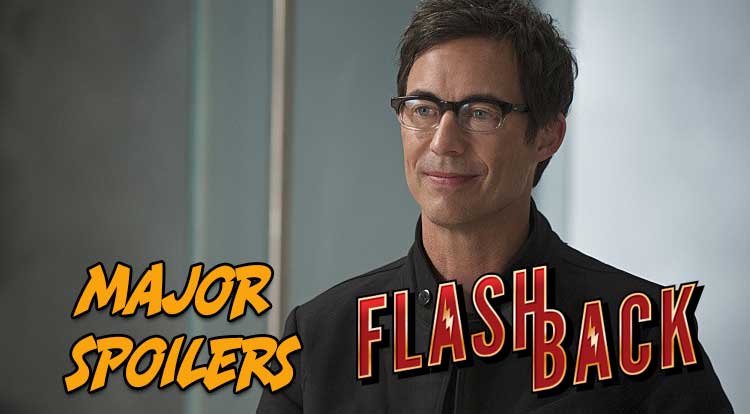 Flashback is back once again to take you deep into the latest episode of The Flash on the CW. This week, it’s a trip to Starling City, a Canary Cry, and April 25, 2024.

Joe and Cisco visit Starling City and ask Captain Lance for help with their investigation into Dr. Wells; Laurel asks Cisco for a favor; Barry faces a new foe who can disguise himself into anyone he touches.

While we have seen many of the Arrow characters appearing in The Flash, it is good to finally see some of the other members of The Flash cast make their way to Starling City. It is fitting that Black Canary appears in this week’s episode as Black Canary (Dinah Lance) first appeared in Flash Comics #86 in August 1947. While Dinah was a big part of the Justice Society of America an dJustice League of America, she didn’t have a huge breakout until 1983 when Black Canary played a major role in Mike Grell’s Green Arrow: The Longbow Hunters series. In DC Comics continuity, Dinah Lance and detective Larry Lance were married and had a child, Dinah Laurel Lance.

Young Dinah grew up around her mother’s old JSA friends, and when the Invasion! event occurred in 1988, Dinah got her own “Canary Cry” when her metagene kicked in. With the help of Wildcat, Dinah became a great fighter and made Gotham City her home base. Later she would become a member of the Justice League where she meets and eventually has a May/December romance with Green Arrow.

Black Canary became even more popular when she teamed up with Barbara Gordon in the Birds of Prey series, and the rest is history… or at least that is where we choose to end our fond memories of Black Canary before all the Blackest Night/New 52 shenanigans kicked in.

By the time this episode wraps up, Black Canary has a new piece for her costume that many fans will remember as a long time must-have in her wardrobe. Two prominent cities in the DCU make appearances this week.

Home of Ferris Aircraft, this is the second time Coast City has been seen in the series (the last time was in Fallout) In the Arrow universe, Oliver Queen calls Starling City his home, but in the four color comics, it is Star City where Green Arrow resides.

Like Coast City, Metropolis, Smallville, and Gotham, Star City hasn’t jumped around quite a bit over the years.  In the 1960s, Star City was said to be located near the Great Lakes, and near Massachusetts Bay and Connecticut in the 1970s and early ’80s.  In DC Comics Presents #87, it is noted that Star City is located in Boston, Massachusetts. More recently, Star City has been positioned north of San Francisco – notably in Birds of Prey #119 and in the 2010 animated short DC Showcase: Green Arrow.

The first appearance of Star City was in More Fun Comics #73 in November 1941, which makes Morton Weisinger and George Papp the creators of the town.  Interestingly, Aquaman made his first appearance in this issue.

In the television show, Arrow, Starling City is actually made up of ariels from Vancouver, Baltimore, Boston, Frankfurt, Tokyo, Jersey City, Philadelphia, and Brussels.

Everyman (aka Hannibal Bates) first appeared in 52 #21 in 2006. The character’s name, as noted by Barry Allen in this week’s episode is a combination of Hannibal Lecter and Norman Bates. Everyman was created by Grant Morrison, Geoff Johns, Greg Rucka, Mark Waid, Keith Giffen, and Joe Bennett…. whew! Seems like everyone had a hand in creating Everyman.

While Everyman in the television show simply has to touch another person to change his identity, in the comics, Hannibal had to eat living matter from others to gain their powers.  This became quite a surprise point in the series, when it was revealed how far down the Hannibal the Cannibal road he had gone, when it was revealed he was eating members of Infinity, Inc. I remember this being quite a talking point during the 39th week of the series.  In the end, Steel and the Teen Titans were able to bring him down, showed up for a while in One Year Later, before being killed, buried in the tomb below the Hall of Justice, and returning from the dead during the whole Blackest Night debacle.

The dashboard camera of the police car “Eddie” shoots up this week clearly shows Cam52 in the corner of all the playbacks.

And because we can…

Here are numbers from the arrest log of Jacob Fisher

April 25, 2024 – That’s the date on the future paper that let’s us know when The Flash disappeared. Interestingly, this episode aired the week of April 25, 2015. Barry’s clock is ticking, as he only has nine years before the big event!

There were all sorts of names to seen in this week’s episode of you look close enough, though truth be told, the show creators may have grown tired of the constant easter egg dropping for the fans, as quick searches yield little direct connection to DC Comics history.

Jacob Fisher – the guy who was first accused of robbers. The closest I could find was Otto Fisher (aka Aerialist) from Green Lantern Vol. 2, #35 (March 1965)

L. Campbell – Another one of the reporters who wrote on the STAR Labs explosion.

G. McNeil – One of the two supervising officers in the arrest of Jacob Fisher

B. Morrison – The reporter who first covered the explosion at STAR Labs. Again, no direct connection, but as mentioned earlier, Grant Morrison did create Everyman.

T. Yates – One of the two supervising officers in the arrest of Jacob Fisher

J. Taylor –  The Reporting Officer on Duty when Jacob Fisher was arrested.