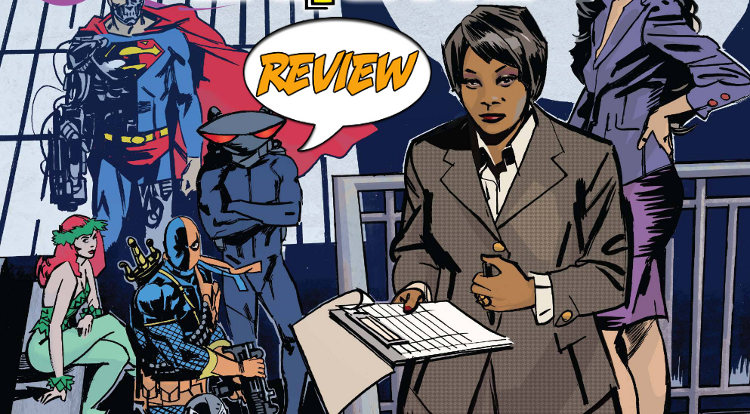 Convergence: Suicide Squad #1 hands DC’s favorite bad guys a hard mission. But if it wasn’t a tough job, it wouldn’t be one for the Suicide Squad, would it? “THIS IS THE FATE OF THE WORLD. WE CAN’T SCREW THIS ONE UP”

Convergence: Suicide Squad #1 finds the members of the classic Suicide Squad trapped beneath a dome in Metropolis, making the best of a bad situation. Convergence has stripped the super-types of their super powers, leaving players like Deadshot and Captain Boomerang in prime position. But with the upcoming “celebrity death match,” the powers are back on and the Suicide Squad needs to reform for a fight for survival.

Frank Tieri puts a lot of familiar faces into play from various incarnations of the Squad. Amanda Waller is back in fine form, along with less iconic (but perhaps more recent) squaddies like Bane, Black Manta, and Deathstroke and a few interesting surprises. The Suicide Squad is getting sent against the heroes from Kingdom Come; in particular, the turbocharged Alan Scott Green Lantern and his floating New Oa base. Tieri comes to the Squad like he’s been writing them for years. The classic Amanda Waller toughness is on full display, and Deadshot and Boomerang are their usual, gleefully mercenary selves. The issue is entirely a “getting the band together” sort of deal, with a good dose of hard-boiled dialogue, and clearly sets up a goal to be resolved in the follow-up issue. The big surprise member sets a hook in particular that makes me sure to pick up the next issue.

The art gets style points for composition, but suffers in the details. Tom Mandrake has good layouts, using interesting angles and a good sense of space to create mood. However, overenthusiastic lines and cross-hatching gives the art an oppressive look. His faces are chunky and unappealing. A little more subtlety in the linework and coloring would give the art more power, but as it is, Convergence: Suicide Squad #1 is weighed down by some heavy-handed effects.

Converge: Suicide Squad #1 is the best of the Convergence tie-ins I’ve read yet. It is shackled to a semi-ridiculous crossover, but Tieri gets to the point and sets up an interesting mission. If the art was similarly up to snuff, this would be a clear four read, but it’s still an entertaining read in itself. Check it out.

Heavy-handed art style drags down a good entry in the Convergence crossover.