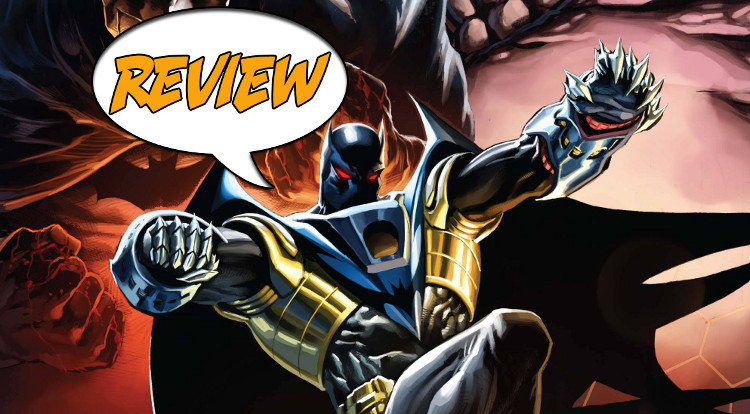 Convergence: Shadow of the Bat #1 Review

In Convergence: Shadow of the Bat #1, the Bat-Shadow falls squarely on Metropolis, as did a strange dome cutting the city off from all other resources. Will Bruce Wayne and Jean-Paul Valley be able to put aside their differences amidst a city on the skids? This week’s Convergence entries seem to be a celebration of the 90s, and Convergence: Shadow of the Bat #1 is no different. The script calls for Bruce Wayne to be trapped in Metropolis for the Telos dome-drop, where he’s infiltrating Tobias Whale’s gang with an incognito Jean-Paul Valley. And that means it’s time for Batman and Azrael-Bat to join forces to protect the city’s food supply from profiteers and smugglers. It’s an excuse for the two to butt heads over their differing interpretations of vigilante justice, while an egg-like man shoots rockets at trucks. So Larry Hama definitely remembers the 90s. Especially when the city competition manifests in the latter pages, and it becomes clear that our uneasy Bat-allies are about to face off against time travelers in the next issue.

Unfortunately, Larry Hama’s dialogue fails to deliver in this instance. As a writer, he’s always had some vocal tics, but the sentences are so leaden and on the nose in this issue that it’s distracting. Jean-Paul offering a nugget like “A team-up? You’re not getting in my way if it comes down to a messy ending, are you?” isn’t so much self-aware as it is obvious. Having a villain shout out “Whale won’t let you get away with this, Batman!” actually generates dust on the page. I love Hama’s current work on G.I. Joe, so it’s not like he’s lost a step. The lines just don’t work with these characters.

The art team is energetic on the action, with characters pin-balling all over the page on the truck raid sequence. The glossy sheen from Elmer Santos’ colors makes Jean-Paul’s bat armor look better than ever, but comes off weirdly on the plasticine faces of the protagonists, rendering everyone doll-like. A few of the more ambitious layouts don’t work well, such as a pool-shooting sequence where the balls breaking into the major players’ faces ends up looking like a bad Star Trek novel cover.

BOTTOM LINE: FOR TOBIAS WHALE AND AZRAEL ENTHUSIASTS ONLY

Wait, do those even exist? It seems like the best Convergence tie-ins face the Convergence plot dead-on, rather than using most of the pages as an exercise in nostalgia. Most of the issue is a fight over an issue that won’t matter by the next one, leaving Convergence: Shadow of the Bat #1 inoffensive but inconsequential. If you like your Batman in armor and miss the halcyon days of the 90s though, this one’s for you.

CONVERGENCE: SHADOW OF THE BAT #1