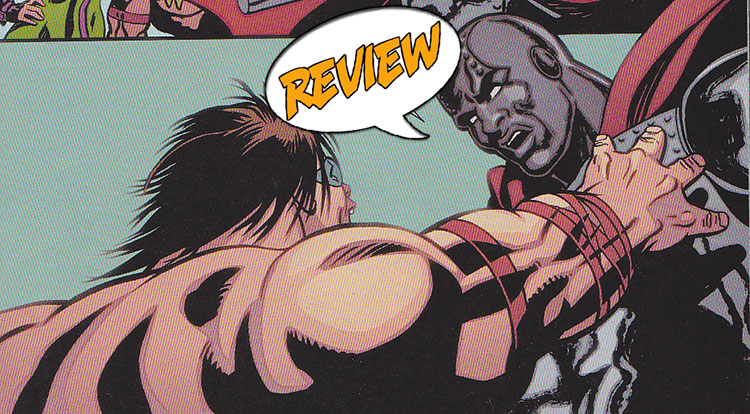 Crime doesn’t stop just became there’s a dome over the city, and Steel’s had to put in overtime while the metahumans remain depowered. But that’s about to change, and not for the better. Previously on CONVERGENCE: Braniac has used his plot-bendy powers to make everything canon, and in the process secluded large cities (and often multiple versions of cities) under large domes for a year, isolating them from the rest of the world(s). Steel has been stuck in Pre-Zero Hour Metropolis.

THE BENEFITS OF TECHNOLOGY IN A DRAINED METAHUMAN WORLD

For the past year, Steel’s had his work cut out for him since Superman went MIA. He’s occasionally had some help from Natasha and Jemahl, who were originally visiting Metropolis for a short time but then became stuck there when the dome went up.

There isn’t much chance for talk before some of Ex-Lexcorp renegades crash into Professor Hamilton’s lab, and Steel goes to take them out. But things go from bad to worse when Natasha and Jemahl go to help a friend, and Braniac throws down the gauntlet. Then GEN13 shows up, teleported from San Diego, and it turns into a free-for-all which honestly feels kinda pointless to me.

I’m not a fan of the Battle Royale vibe that CONVERGENCE gives off, especially when it’s heroes fighting other heroes. At least having heroes and villains face off each other, even if the hero doesn’t match the rogue’s gallery, makes more sense. Why the heroes don’t quickly realize they need to work together, instead of dancing to Braniac’s tune, is beyond me.

And then The Parasite comes in and messes with everyone and I really don’t know what’s going on anymore. I kinda want to buy the next issue to find out what happens to the cat in the laboratory, and it’s pretty bad when that’s the only thing I’ve become interested in at that point.

Part of my problem is that Steel was quickly put out of commission and it was right when I was getting excited because I remember him from watching the 90s Superman cartoon. And I’ve never admitted knowing much about anything in the DC universe – most of what I know came from the Batman and Superman cartoons. But I remember Steel and remember liking him, and now I want to go look up some trades with him.

But I don’t think that was DC’s intention with CONVERGENCE, especially since I’m not really interested in buying the second issue. I’m much more interested in finding trades or back issues. I know I’m missing plenty of nuance with this issue, given that this event is banking on nostalgia on the part of the readers, and I’m not in that group. So, what I’ve had to say should probably be taken with a grain of salt.

It’s a pet peeve of mine when the cover art doesn’t look at all like the interior art, but at least this time it was fairly close. Maybe it’s because of the nature of looking robot-like, but there was no jarring sensation from when I opened the cover to starting the issue.

The artwork is ok. It isn’t something I’d go seek out and I’m not going to start following everything this artist does anytime soon, but there wasn’t any point where I was wondering what in the world was going on with the art. So, that’s good. Sometimes it’s good when the art doesn’t call attention to itself.

Unfortunately, with how I found the story lacking, art that would make me go “wow” would have been nice. Great art doesn’t fix a mediocre or bad story, but at least it looks prettier.

As I said, this book reminded me of That Guy Steel and how he was cool and how I should really go look into the comics, but besides that factor and me being interested in the cat in the laboratory, I really didn’t like this book very much. It’s probably worth picking up if you’re a completionist for Steel, or a fan of Gen 13, but otherwise I’d skip it. Which is unfortunate because Steel is awesome. Also really what is going on with that cat?

There’s no time for character development before things go south, which is this issue’s biggest weakness.