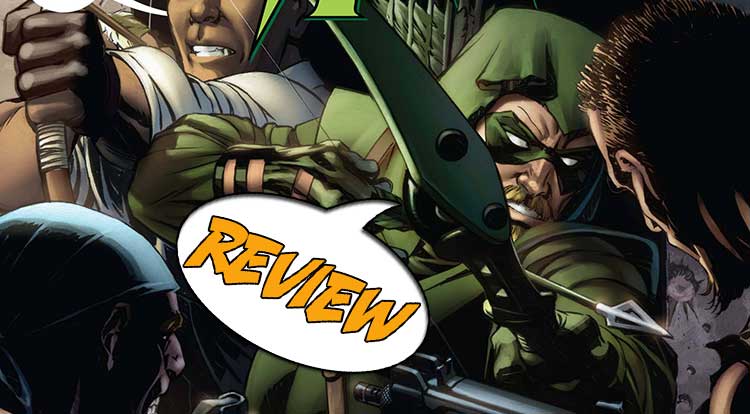 Green Arrow has been trapped under a dome for a year, but the timeline has a way of reuniting father and son… and a future daughter. Previously in Green Arrow: Running as a loner for several years in Seattle, Washington, Green Arrow has recently started teaming with old friends to help them out. One incident in particular has Green Arrow traveling to Metropolis to take down his old pal Hal Jordan, who has recently become the evil villain Parallax. Then Metropolis was snatched from the time stream just prior to the events of Zero Hour, and put under a dome, where all heroes who had powers are powerless, and Green Arrow returns to the trick shot.

CANON NOT CONTINUITY, RIGHT? AM I RIGHT, GUYS? GUYS?

There’s a gang of white supremacists running around a section of Metropolis, threatening and kicking out anyone who doesn’t look like them. For a hero who spent many years (1969-1994) fighting social injustice, this seems like a very fitting story to feature in the book, and from that stand-point this issue works really well. While it is clear there are other heroes in Metropolis (Justice League International, Batman, Superman, etc.) Oliver Queen continues to go it alone fighting the good fight in a Metropolis that is quite a bit different than what we have seen in other books. In other titles the city seems to be doing fine, without a lot of crime. Other books depict the city going through urban decay at an accelerated rate with people fighting over control for food and drugs. Still others have to deal with major villains like Metallo’s attempts to take over the city.

Through a series of events, Green Arrow meets his son, Conner Hawke, and though the two fight off the supremacists, it’s the moment the dome comes down that spoils the issue. For the most part, the travel down memory lane works in most of the Convergence books, but when simple things like continuity get in the way, the reading experience is ruined. If there are multiple events happening in the city at the same time, they could and should be referenced from one book to another. When the dome goes down, Parallax gets reactivated in a giant explosion that can be seen all around the city. In other books it is clear resources are at a minimum, yet other books show people freely driving cars, or in Green Arrow’s case, his motorcycle without concern. In other books, when the heroes are transported to another city to fight it out, Telos uses his silver goo to move them around. Here it is a teleport effect that has Oliver and Conner standing in Metropolis in one panel, and then standing in another location in the next.  I know the new motto at DC Comics is Canon Not Continuity, but when simple things like the dome coming down in the day in a book like Supergirl, and then the dome comes down at night in Shadow of the Bat (these are the same city by the way), taking anything in the Convergence event seriously is out the window.

The first 19 pages of Convergence: Green Arrow work really well. Though the meeting between Conner and Oliver is a bit forced due to the situation, the reunion is also reasonable given the situation the characters have been put in.  After that, it’s a grab bag of what you like and what will anger you.

I really like Rags Morales’s art. He’s able to capture really dynamic poses in each panel, even when characters are just standing around having a conversation. Though there are a few funky facial features in a several panels, just looking at the detail Morales puts on the background characters, and the surrounding environments is excellent and worth the price of this issue.

Of the Convergence books I’ve read this week, Green Arrow is the one that makes the most sense… to a point. The question as to why Oliver isn’t working with the Justice League isn’t exactly clear, but I like the fight against the supremacists in a city trying to keep it together.  The ending seems a bit confusing, but for those who are more into the other worlds of Convergence, the cliffhanger pushes us forward to the next issue without much complaint. If you aren’t familiar with Green Arrow’s history pre-Zero Hour, this issue may be very confusing, so before you dive in you might want to spend 20 minutes on Wikipedia.

Of the Convergence books I've read this week, Green Arrow is the one that makes the most sense... to a point.