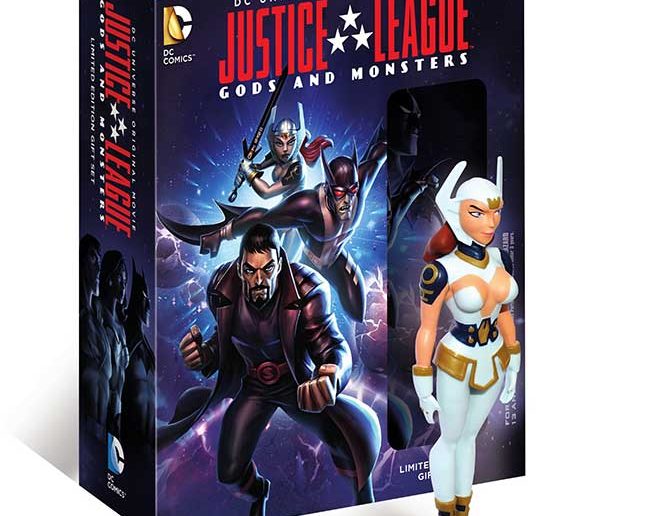 Witness a divergent reality where the Justice League protects the planet – but answers to no one but themselves. Employing methods of intimidation and fear, this Superman, Batman and Wonder Woman deal brute force in the name of justice. From the creative genius of executive producer Bruce Timm and co-producer Alan Burnett comes an original story where the world’s greatest triumvirate of super heroes has distinctly different origins. Superman was not raised by the Kents in Smallville, the Caped Crusader is not Bruce Wayne, and Wonder Woman is not an Amazon warrior of Themyscira. They are as likely the world’s saviors as Earth’s despotic rulers. When a group of famed scientists experience untimely “accidents,” a government task force follows the trail of clues to the Justice League – but is there a more powerful player operating from the shadows?  It’s a high stakes game of intrigue, mystery and action that asks the question: How do you serve justice to those above the law?
With a twist on your favorite Justice League characters, this film is full of thrilling new adventures and jam-packed with a celebrity voice cast which includes Michael C. Hall (Dexter) as Batman, Benjamin Bratt (Law & Order, 24) as Superman, Tamara Taylor (Bones) as Wonder Woman, Paget Brewster (Criminal Minds) as Lois Lane, Jason Isaacs (Harry Potter films, Dig) as Lex Luthor and C. Thomas Howell (E.T., Southland) as Dr. Will Magnus.

Justice League: Gods & Monsters will be available on Blu-rayTM Deluxe Edition for $29.96 SRP, Blu-rayTM Combo Pack for $24.98 SRP and on DVD for $19.98 SRP. The Blu-rayTM Combo Pack includes a digital version of the movie on Digital HD with UltraViolet. The Blu-ray™ Deluxe Edition will include the Blu-Ray™ Combo Pack, along with an exclusive Wonder Woman figurine in a numbered limited edition gift set. Fans can also own Justice League: Gods & Monsters in Digital HD on July 28 via purchase from digital retailers.

“We are thrilled to announce this new and totally unique DC Universe Original Movie,” said Mary Ellen Thomas, Warner Bros. Home Entertainment Vice President, Family & Animation Marketing. “With Bruce Timm presenting his distinctive take on the alternate universe of Justice League: Gods & Monsters, we know fans will be gripped by the plot twists and the question of whether we are dealing with heroes or villains.”

Justice League: Gods & Monsters will be available for streaming and download to watch anywhere in high definition and standard definition on fans’ favorite devices from select digital retailers including Amazon, CinemaNow, Flixster, iTunes, PlayStation, Vudu, Xbox and others. Starting July 28, Justice League: Gods & Monsters will also be available digitally on Video On Demand services from cable and satellite providers, and on select gaming consoles.

DC Entertainment, home to iconic brands DC Comics (Superman, Batman, Green Lantern, Wonder Woman, The Flash, etc.), Vertigo (Sandman, Fables, etc.) and MAD, is the creative division charged with strategically integrating across Warner Bros. and Time Warner.  DC Entertainment works in concert with many key Warner Bros. divisions to unleash its stories and characters across all media, including but not limited to film, television, consumer products, home entertainment, and interactive games.  Publishing thousands of comic books, graphic novels and magazines each year, DC Entertainment is the largest English-language publisher of comics in the world.

JUSTICE LEAGUE and all related characters and elements are trademarks of and ©DCComics. (s13)

Warner Bros. Animation (WBA) is one of the leading producers of animation in the entertainment industry, producing and developing both CG and traditionally animated projects for multiple platforms, both domestically and internationally. For TV, WBA produces series such as Teen Titans Go!, The Tom and Jerry Show and the upcoming Be Cool Scooby-Doo! and Wabbit – A Looney Tunes Production for Cartoon Network as well as Mike Tyson Mysteries for Cartoon Network’s Adult Swim. As the home of the iconic animated characters from the DC Comics, Hanna-Barbera, MGM and Looney Tunes libraries, WBA also produces highly successful animated films — including the DC Universe Animated Original Movies — for DVD. One of the most-honored animation studios in history, WBA has won six Academy Awards®, 35 Emmy® Awards, the George Foster Peabody Award, an Environmental Media Award, a Parents’ Choice Award, the HUMANITAS Prize, two Prism Awards and 20 Annie Awards (honoring excellence in animation).