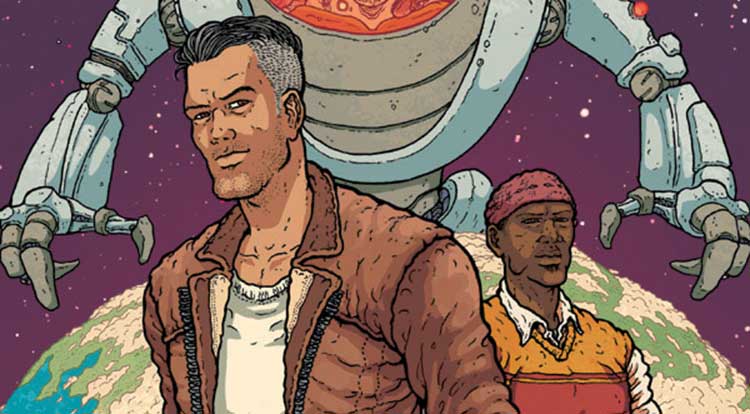 Set in a near future, where a sudden depopulation of Earth has resulted in a comfortable but dull utopia, EXIT GENERATION follows a bored punk named Jack, who is thrust suddenly into the unlikely role of savior when hungry aliens snatch his nearest and dearest. The first issue of this monthly series lands in comic shops and on Comixology in September. “Hungry aliens vs tasty humans… EXIT GENERATION is the ultimate food fight!” said ComixTribe Editor-in-Chief Steven Forbes. “EG delivers a sci-fi romp with attitude and heart that will appeal to readers of all ages.”

“Both Caio and I are delighted that ComixTribe saw EXIT GENERATION fitting into their excellent slate of titles,” said writer Sam Read. “After the excellent reception for FIND, I’m excited to collaborate with them on taking this series worldwide.”

“Exit Generation has sold better than Saga for us,” said Jared Myland of OK Comics in Leeds, a shop short-listed for the Spirit of Retail Eisner Award in 2014. “In fact it’s only been outsold by Batman and Amazing Spider-Man. It’s our best selling self published comic, ever.” “With EXIT GENERATION, Sam did just about everything right,” said ComixTribe publisher Tyler James. “He put in the work, assembled an incredible team, made a great series, and then went out and sold it one copy at a time. After the surprise sell out success of FIND earlier this year, it was a no-brainer to work with Sam again to bring EXIT GENERATION to the wider audience it deserves.”

ComixTribe has announced that teaser images, previews and more will be posted at the new EXIT GENERATION Facebook Page, in anticipation of the series’ release later this summer. EXIT GENERATION will release monthly in the direct market and digitally (day-and-date) on Comixology starting in September. Series subscriptions can also be purchased now on ComixTribe’s online store. ComixTribe is a publisher of creator-owned comics, including AND THEN EMILY WAS GONE, SCAM, The Red Ten, Oxymoron, EPIC, and The Standard. In addition to being a publishing imprint, ComixTribe is also an online community, with the mission statement: Creators helping creators make better comics. ComixTribe also sponsors the annual 30 Characters Challenge, an online art event where participants challenge themselves to create 30 brand new characters in just 30 days, one for every day of November.