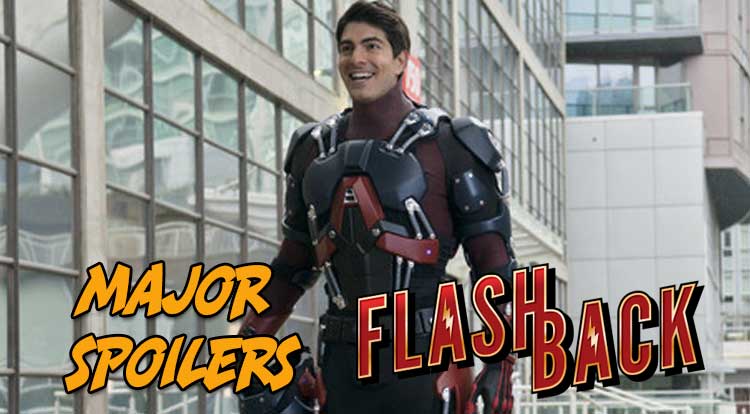 It’s time for another crossover episode, and this time it features Barry Allen teaming up with The Atom!

It’s a team-up episode, which means new heroes and new revealed identities for everyone! Though you know him already from Arrow, this episode marked the first time Ray Palmer has appeared on The Flash.

Created in 1961 by Gardner Fox and Gil Kane, Ray Palmer is not the first to carry the name of The Atom. That would go to Al Pratt, the Golden Age Atom. As a super scientist, Ray Palmer studied and worked in Ivy Town, New England studying super compression as a way to combat over population and famine. In the early days, Palmer’s attempts to shrink things resulted in them exploding in a very spectacular way. However, when forced to use the shrink ray on himself, Palmer discovered that he was immune to the big kaboom! Palmer develops a belt to control his ability to shrink to subatomic size.

It wasn’t until Sword of the Atom (1983), which the Batman the Brave and The Bold animated series episode was based on, that Palmer’s life and powers changed. While many like to think Ray and his wife, Jean Loring, had a great life together until the events of Identity Crisis, the two divorced after he discovered she cheated on him. While living with the Morlaidhans, Palmer created a new costume from the leftover remains of a white dwarf star, which is the method most of us know today as the source of The Atom’s powers.

Palmer’s origin story took place in Showcase #34, and interestingly the name Raymond Palmer is an homage to sci-fi magazine editor Raymond A. Palmer.

Most of you already know this, but just in case you didn’t Ray Palmer is played by Brandon Routh, who played Superman in the Superman Returns movie for Warner Bros. This isn’t the first time an actor has jumped from one superhero to another; Ryan Reynolds played Green Lantern and Deadpool, Chris Pine has played Captain Kirk and Jack Ryan, while Chris Evans has been both Johnny Storm and Captain America to name a few.

I haven’t watched the new season of Arrow yet, but does the Advanced Technology Operating Mechanism ever get small, or did we see the origin of tiny Ray Palmer in this episode?

VILLAIN OF THE WEEK While the television series introduced us to Brie Larvan, the female incarnation of Bug-Eyed Bandit, in comics the character has always been male. Bertram Larvan first appeared in Atom #26 (1966)  as an inventor who designed a mechanical insect to control insect pests. Instead of finding an Angel Investor, Betram decided to create and control an army of insects and go on a crime spree.  Interestingly, Marvel’s  Ant-Man first appeared four years earlier in Tales to Astonish #35. Even from the early days DC and Marvel have traded punches back and forth with characters with similar abilities…

Anyway… The Bug-Eyed Bandit eventually finds out that Ray Palmer is The Atom and gives himself amnesia when he uses an amnesiac spray on himself. Good thing he was written out of existence during Crisis on Infinite Earths… well… until Blackest Night, but the less said about that the better.

And in case you missed that last bit, Bug-Eyed Bandit died during Crisis on Infinite Earths, the same series that saw Barry Allen offer up the Ultimate Sacrifice.

Bertram did/does have a son, who goes by the same name, and has the same powers, but his current whereabouts are unknown. As far as actress Emily Kenney goes, you may remember her from such television success as Law and Order: Special Victims Unit, and The Walking Dead.

The first incarnation of Bug-Eyed Bandit was created by Gardner Fox and Gil Kane, while his son was created by Keith Giffen, J.M. DeMatteis, and Adam Hughes.

Interestingly, at one point Brie Larvan calls herself the Queen Bee of the Hive There have been a number of villains that have gone by the name of Queen Bee; one is the leader of an interstellar species, and controls people with her mind, another is the ruler of the nation of Bialya who has fought against the Global Guardians, Justice League International, and Justice League Europe. A third is part of the Creature Commandos, while Queen Bee 4 is the sister of the second Queen Bee (and also the ruler of Bialya), who has created a legion of cybernetic humans to act as the police force in her country. One other is an impersonator from the early Silver Age, who took on the role of leader of Gotham’s criminal organizations for fear that Eclipso would killer her, while the New 52 version claims to be the daughter of Brainiac.

This week Barry uses his unique abilities as a defibrillator to bring Cisco back from the dead.

Cisco Ramon died briefly again this week, and it looks like his continued death and resurrection could become a running gag on the show. Notable students of Hudson University include:

Clark Kent almost went to Hudson University, but decided Metropolis University would be a better fit.

Hudson University also happens to be a university in the Law & Order television universe.  Jesse L Martin, who plays Detective Joe West, was a Law & Order regular from 1999-2008.

There appears to be some confusion on the Internet as to the first appearance of Hudson University. One source cites Batman comics in the 1940s, while another shows that the university appeared in Detective Comics #395 from January 1, 1970. The Essential Batman Encyclopedia lists Hudson University as first appearing in Batman #217 from December, 1969.

There was a Highland Park that appeared in Countdown to Infinite Crisis #1.

A CHARACTER BY ANY OTHER NAME

Two names popped up this week that, like Harrison Wells, appear to be original creations for the series. However, names can be repurposed for whatever reason and there are ties to other DC characters in their names.

Dr. Lindsay Kang – While a Dr. Lindsay Kang doesn’t exist in the DCU, Zou Kang of New Earth does. An elementary school teacher by day, Zou Kang became the hero known as Thundermind when he recited the words found on some old pottery.

Dr. Bill Carlisle – The closest name to Bill Carlisle in the DCU is Jill Carlyle, the Crimson Avenger from New Earth. She used to study law, but became a minor Spirit of Vengeance.  Jill is a member of the JSA.

There wasn’t a whole lot in the way of little details this week, but a few caught my attention

DET L. HANNA – When Iris confronted Eddie with her ultimatum, Eddie walked by the desk of Detective L. Hanna. Leesa Hanna is the assistant decorator in the series.

18th and Olive – While I didn’t find anything specific to the location in the DCU, Flash Vol 2 #18 is titled The Adventures of Speed McGee. Tina McGee is the head of Mercury Labs and is played by Amanda Pays.

Shiny Diamond – A big crime spree going on at the beginning of this week’s episode, and while there isn’t a reference to the Shiny Diamond in any Internet search that ties directly to the DCU, Chunk (aka Dr. Chester Runk), a supporting Flash character does need diamonds to feed the teleportation device he merged with. Since diamonds are much more dense than his body, he first meets The Flash in the middle of a robbery.

Bees.. why’d if have to be bees?  That’s a nice nod to Raiders of the Lost Ark. Indiana Jones utters the phrase after looking into the Well of the Souls and seeing it filled with snakes, something he is deathly afraid of.

400 Joules – when Barry needed a quick heart restart, the team amped the defibrillator up to 400 Joules, which is the same as 400 watts. A 400 watt lightbulb pulls in roughly 3.6 amps.