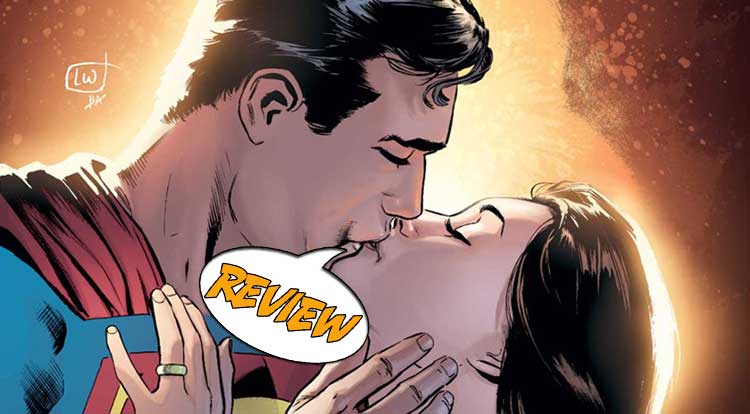 Superman and Lois sitting in a tree, K-I-S-OH-MY-GOD-THE-CITY-IS-UNDER-A-GIANT-DOME! Previously in Superman: Worlds live, worlds die, and the Last Son of Krypton fights for Metropolis… or Gotham City, because everyone in the DCU needs to be in Gotham at the same time; especially if a universe ending event is about to occur.

GANGBUSTER, THE BUSTER OF GANGS

With Gotham under the dome, everyone with any kind of power has been reduced to an average run of the mill human… or Batman… if you want to be Batman. Superman wants to be Batman, but without the coo-coo-magoo.  While crime has dropped over the last year, there are still criminals who want to make money in anyway they can, including creating some of the craziest drugs from whatever chemical ingredients are lying around the house. Their activity has led to a lot of people dying and Clack wants bring them down.  With Lois as his Oracle, Clark dons a mask and black costume, and busts the gangs whenever he can.  It’s a short sequence at the beginning of the issue, but it felt like Dan Jurgens was trying to channel Roger Stern’s Superman/Gangbuster from 1989.  When Clark is caught in the crosshairs of a flame thrower, it’s a good thing the dome goes down at the right time, returning all of Superman’s powers, and giving readers a great Superman reveal.

Oh, in case you were wondering, Lois, Clark, and Jimmy were all in Gotham at the time of the abduction, which explains the why, and as an even bigger surprise for readers, with his powers stripped, Clark and Lois can finally conceive a child. Because it is a device that any writer can whip out at any moment, Lois is just days away from giving birth to their first child.

Then the dome goes down.

Do you see where this is going?

As one of the most powerful beings in the universe, one would think it would be a simple matter for Superman to take out The Extremists and anyone else who wants to destroy Gotham City, but you would be wrong. WRONG, SIR! WRONG! Instead, Superman gets involved with the Gotham City from the Flashpoint universe, where Thomas Wayne believes attacking Superman is the best offense in keeping his city safe. Midway through the issue, Flashpoint Batman starts to realize what is going on, but it is too late as Cyborg, Captain Thunder, and Green Lantern are already giving Superman a beatdown, and even with Jimmy Olsen trying to help in the Whiz Wagon*, the fight seems like a tough one for Superman to win.  From the first page, this issue has been a giant fight sequence, which I guess people want to see in their Superman titles. If that truly is the case, then this issue delivers on that front.

If you read the Flashpoint series, you know that reality also had its own Kryptonian, but he wasn’t able to grow and develop fully like Clark did. He also had a pretty skewed view of the world, and developed a weird emotional attachment to the Flashpoint Lois Lane.  When Thomas Wayne figures out what city Superman has come from, it only takes a moment for Subject-1 to fly to Lois, and attempt to save her, even if it means something not-so-good is going to happen to the baby.

DC went from child endangerment as a story telling tool to prenatal endangerment. Like Convergence: Titans #1, this slapped on element of danger is really lame, and once again sours would could have been a great issue.

GIMME THIS ART EVERY WEEK

The art in this issue simply blew my mind. I knew something good was coming when Clark was running along the rooftops of Gotham, but when Superman was revealed the art soared and became the highlight of the issue. Lee Weeks’s Superman – no, make that EVERY CHARACTER in this issue is superb. The poses are dynamic and the composition in each panel works on every level for me. I would love to see more Weeks work in more DC titles, but he is only one man and there are so, so many issues being released each month.

There are some really great Superman moments in this issue – Clark willing to be the hero, even if it means he may die, Lois and Clark expecting their first child, Superman’s willingness to stand down and talk instead of punch… the list goes on and on. I get it that there needs to be fighting. I get it that the twisted world of Flashpoint is going to take a “fight first, fight hard, no mercy, sir!” approach to its survival. I get that one way to create immediate danger for our heroes is to put a pregnant woman in danger, but man, it is a low blow from the story telling perspective. I expected more from this issue, which is why the cliffhanger fell flat for me. The art is fantastic, and is the best part of the issue. A tweak here and different twist there, and this would have been a perfect issue.

I expected more from this issue, which is why the cliffhanger fell flat for me. The art is fantastic, and is the best part of the issue.

*The Whiz Wagon? It and Professor Hamilton seem forced into the issue for nostalgia reasons as yet another way to say “Hey you guys, remember all this stuff we took away from you?”