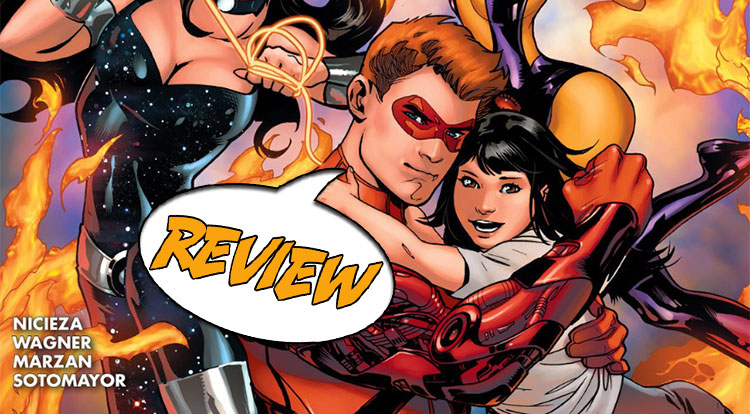 It’s been a year without temptation, a year without major world shattering events, and now Roy Harper must come face to face with the one thing he wishes he had back. But is he willing to pull the trigger?

Previously in Titans: Oh boy… Roy Haper went through a lot after his daughter died. Remember that whole thinking a dead cat was his daughter? It’s probably a good thing Gotham City was snatched away by Telos at the moment Flashpoint began and kept safe under a dome.

Pre-Flashpoint Gotham City is the nexus of the first week of convergence, because all of the heroes in the DCU seem to have been there at the moment the dome went up. All sarcasm aside, Arsenal, The Flash, Donna Troy and Starfire have been living a life under the dome for the last year. While the first few days of being held captive were tough for heroes like Batgirl, Roy Harper experienced the event a little differently. Sure things got bad, but then the situation improved as everyone was forced to work together. While we have seen villains doing their big bad thing in other books (like Batman and Robin), it looks like most crime in the city has dropped dramatically. This positive change has also had a positive change on Roy who is experiencing less anxiety, less drug use, and thus less talking to dead cats in alleys. Still, the reminder that his daughter is dead weighs heavy on the hero, and a day hasn’t gone by that he reminds himself that he is doing it for her.

Then the dome drops and The Extremists show up. It isn’t the same members of The Extremists that showed up at the end of Batman and Robin, instead it is the other half of the team sent to Gotham to destroy it. Donna Troy and Starfire aren’t able to handle the might of Lord Havok, Gogon, and the rest by themselves, so Roy does the one thing every addict shouldn’t do – he puts the costume back on.  He rises up to become the hero that everyone expects him to be. He does it for his daughter.

Then his daughter reappears.

It’s a pretty awful moment in the story as Dreamslayer brings Roy’s daughter back, and gives Arsenal the ultimatum to kill his friends or see his daughter die again.  Child endangerment is a trope that is super effective against heroes who have kids, and for readers who have kids, the moment is also heightened as thoughts of their own child in danger kicks in some primal instinct to fight and cry and scream. Child endangerment is also a trope that is super lame and has become a overly done story element over the last 15 years. I don’t know if Fabian Nicieza has children or not, but  casually tossing in the death of child as the gimmick for the issue seems half-hearted and empty. It’s probably just me, but this element soured the issue for me.

THE ART IS PRETTY

Editor Marie Javins has a huge project on her hands, and she’s handling the Convergence event wonderfully. I don’t know if it was intentional, or if it is a happy mistake, but the portrayal of Gotham City is radically different in each of the first week’s issues based on the characters in the story. Batman still has a dark and gritty city, The Flash is dealing with the city in dull tones due to the lack of powers and his failings as a father. For Roy, Donna, and Kory, Gotham Under the Dome is a place of tranquility and hope as they learn to deal with a situation that doesn’t require them to fight every single day.  Ron Wagner, Jose Marzan, Jr. and Chris Sotomayor made this Gotham a nice place to hang out. If Gotham were real, their renderings of the city makes me want to pay a visit.

Character design works, and the action sequences really show dynamic motion, without every character striking the same pose panel after panel. If I had one complaint it would be that everyone (including the citizenry)  looks a bit too fit overall. The easy out is, of course, the lack of food in the city for the last year, which would cause even the more rotund to lose a few pounds.

BOTTOM LINE: NOT KEEN ON KILLING A CHILD

There is a lot of Roy Harper backstory in this issue. If you don’t know who he is, this issue gives you the 411 quickly, and sets up the trigger for the final page. I’m becoming more and more sensitive to child endangerment issues in comics, which hurt the overall reading experience for me. This may not be the case for you.  Take the resurrection and possible death of Lian off the table, and the story is really solid; the addict given the choice to return to the thing that hurts him the most, and a no win situation that the heroes must win works no matter how you tell it. The art is really good, and the cliffhanger has me ready to read part two. I only hope DC is correcting a mistake they made years ago, and there is a happy ending for Roy.

The story is really solid; the addict given the choice to return to the thing that hurts him the most, and a no win situation that the heroes must win works no matter how you tell it. The art is really good, and the cliffhanger has me ready to read part two.