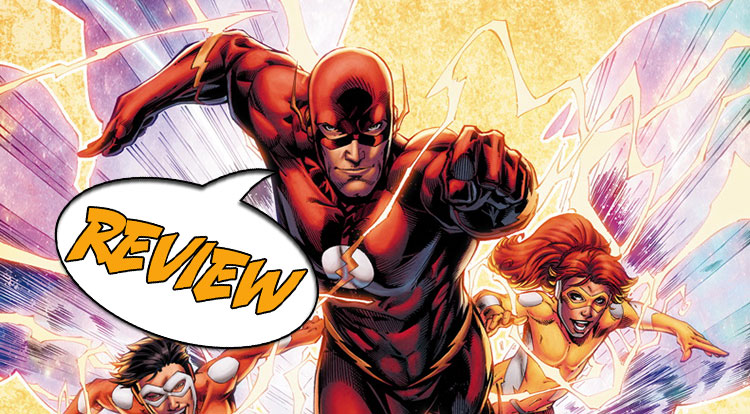 Wally West is back, but so are Jai and Iris. Will they outrun the competition or stumble out of the block in Convergence: Speed Force #1? Previously in The Flash: Wally and Linda finally had a chance to have kids, but they came with their own problems and powers. When Barry returned, the Wests slipped away never to be seen again.

Everyone is in Gotham City. It is extremely odd just how many heroes from the pre-Flashpoint DCU made their way to Gotham City and ended up under the dome. This issue at least explains why Wally West and his kids, Jai and Iris were trapped – a chronal disturbance opened up and Flash and the kids went to check it out. We know that the rift was caused by Barry Allen changing time in the Flashpoint event, which signaled the end of Wally’s reality, and caused Gotham and the millions of citizens to be snatched away by Brainiac and sealed under a dome.

Tony Bedard cranks up all the feels in this issue, as one year later, Wally spends his nights and days trying to figure out how to bust out of the dome. He’s lost his powers, so he feel fairly useless. The city has donated an apartment for him and his kids to live in, but like The Atom, Wally is slowly starting to go mad.  Again, what works so well in these first Convergence issues is that it doesn’t focus so much on the fight that Telos is forcing the realities to engage in, but how the heroes and citizens have been dealing with their captivity for the last year.  Wally is trying to be a good dad (but failing) and readers can tell he truly misses Linda, so from the character development standpoint I like what Mr. Bedard is doing.

The one thing I don’t like about the Convergence event is that it seems to focus a great deal on the characters from the pre-Flashpoint DCU. That part is fine by me, because this past week has been like old home week, where I get to see some of my favorite characters again… even if it may be for the last time. What bothers me is that other cities are supposed to fight each other, yet the only bit we get of the El Inferno Earth, where all the heroes are from the old west, is when Wally runs to the city only to discover they have lost their battle, which forces Telos to destroy everything there. It’s a big traumatic moment in the overall story, and shows what will happen when the other cities fall, but we got nothing of that world in any of the stories. In short, it seems like a waste of a perfectly good world.

As touched on in other books, the heroes realize that they don’t have to (or want to) fight in Telos’ crazy plans to create only one world. Unfortunately, Wally, Jai, Iris, and Fastback from Follywood, Califurnia are going up against a group of Amazon warriors (led by Wonder Woman), who only see worlds to be concurred.  We’ll see how it all plays out in the next issue, but so far, the story is solid.

Artist Tom Grummett has a really long history of doing work for DC Comics, but it has mostly been for the Superman titles. While I would have liked to have seen the likes of Greg LaRocque or other long time Flash artist on this book, Mr. Grummett’s style is right in line with what we all know and love about Wally West. Probably the biggest challenge in this issue is putting Wally in Gotham City. While Keystone is a brighter and more open space, I like how Mr. Grummett, and inker Sean Parsons confine the hero to the claustrophobic city, and then when he is given the chance to quickly explore the other trapped cities, there is very little feels open enough for Wally to stretch his legs.  Adding to the art is the coloring by Rian Beredd who gives the dangerous cities a dark feel, and as the sun shines for the first time on the cities that are now dome-free, its interesting to see the light play on the buildings and surroundings.

There are a few panels where Wally feels a bit more stiff than I would expect, and several times it felt as those his run was simply a cut and paste from another panel. After careful inspection it is clear that isn’t the case, but it feels very repetitive at times. I did get a kick out of all the other cities in battle and preparing as they reacted to The Flash and his kids running through their worlds.

BOTTOM LINE: BETTER WITHOUT THE KIDS

Overall, I love seeing Wally West again. I could do without the kids tagging along, but it makes for a more dire reason for Wally not wanting his world to blow away in the dust. I know some may not feel the same way, but Wally and Linda as a team was always more interesting than a family unit of four for me. Seeing Fastback, Wally and the kids fighting the Amazons will be interesting next issue, but I’m not expecting wondrous things in the followup. This issue is great for a look at what is going on in the world of Telos, and the art is wonderful, which makes this a book worth picking up.

This issue is great for a look at what is going on in the world of Telos, and the art is wonderful, which makes this a book worth picking up.