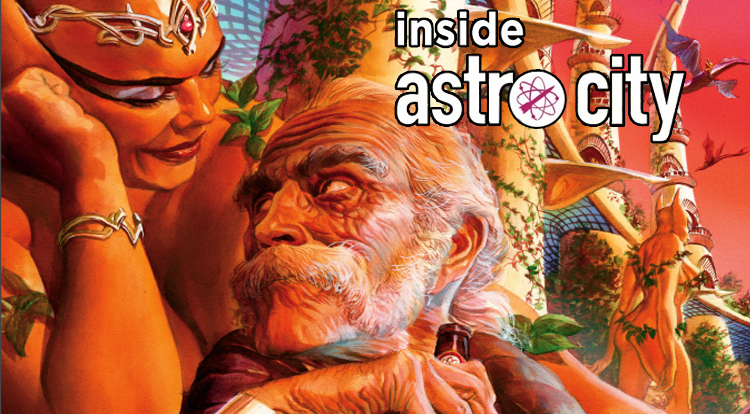 Inside Astro City #22 With Kurt Busiek

Welcome to Inside Astro City, a column focusing on the Vertigo Comics series Astro City from Kurt Busiek, Brent Anderson, and Alex Ross.  Each month, we’ll take a look at the current issue of the series, and ask series writer Kurt Busiek questions about the book.  Let’s jump into issue 22!

Astro City #22: Starfighter has been enjoying a hero’s reward for decades. But with dark forces stirring in the cosmos, will he be called back to action? Or are there other paths? A look into the past, present and future of Astro City’s cosmic guardian, with guest artist Jesús Merino. 1. Starfighter made his first appearance more than 15 years ago in the real world.  How much of his story did you have worked out in those earliest appearances?  Did he spring up fully formed or was he simply the character who worked best in the story you wanted to tell?

Kurt Busiek: If I’m remembering right, Starfighter was mentioned well before he was seen. He was first mentioned in vol. 2 #13, the Looney Leo issue, when the ad men considered hiring Starfighter’s former sidekick, Quark, for an ad campaign.

And then he didn’t actually turn up until…well, three issues later. Not that long, really.

But no, he didn’t spring up fully formed, especially not for a character who all we knew about at first was a name and the fact that he’d had a sidekick. The name itself was one I’d used many years earlier in a superhero role-playing game, so I’m not sure I knew much but “Hey, that’s a nice name, why don’t I mention it in this side-reference?” when he first came up.

Beyond that, I think all we really knew was that he was a hero with an outer-space connection, who’d gone “cosmic” in the 1970s, a la Jim Starlin makeovers of characters like Captain Marvel and Warlock. I suggested to Alex he have a big ol’ biker moustache and energy powers, and left it at that.

Over the years, he cropped up in the background a lot, which gave me more of a sense of what the character felt like to me, but much of his actual background came up when I was writing this story. I made him a novelist because I’d wanted to use that idea for Carol Danvers at Marvel, didn’t quite get there but still liked it, came up with all the “lorus” stuff as a different way to play “cosmic,” things like that. 2.  Duncan “Starfighter” Keller gives what seems like pretty solid advice on how he writes his stories in this issue.  Is the process he describes anything like your own writing experiences?

KB:  He may mean it more literally than I do, since he’s essentially rewriting adventures he’s actually had, and I have to build on metaphors a lot more. But I wasn’t trying to give writing advice from my experience so much as trying to imagine what he would say, given his experience.

But I’m sure there’s some overlap…

3. Starfighter’s appearances in The Dark Age minis (especially the Cosmic Wars and splitting into good vs. evil versions) recall Adam Warlock and the cosmic metaphysics of 70s Jim Starlin and the like.  Is it ever difficult to keep Astro City stories distinct from the comic stories that influence them?

KB:  No, never. People who read the series and experience it from the outside may see some resonance from Starfighter fighting his evil twin with Warlock and the Magus, but if so they’re projecting from what they read into the characters…I was literally thinking of the STAR TREK episode where Evil Spock has a goatee. Similarly, I don’t see much connection between Starfighter taking part in superhero stuff here and there with much that Starlin did in the 1970s…the stuff that Starfighter got involved with involved characters like the Infra-Dauphin and the Universals, who were more Englehart/Kirby-inspired concepts than anything else.

ASTRO CITY is influenced by comics history, but only in pretty vague ways. There were cosmic storylines in the 1970s, so there’s cosmic stuff in ASTRO CITY’s 1970s, too, but there’s no attempt to make it a one-to-one correspondence, just a similar feel. Even when there are direct connections, like in parts of the Dark Age, which was originally outlined to use Marvel history, things have changed so much that, say, Madame Majestrix invading Astro City and threatening to destroy the world just isn’t going to be anything you’d confuse with Stegron the Dinosaur Man invading Manhattan with a bunch of dinosaurs in an issue of MARVEL TEAM-UP.

4. Duncan’s worries that something terrible is wrong in the universe immediately bring to mind The Broken Man’s warnings from earlier issues.  It certainly feels like an intentional callback and more foreshadowing of the same greater threat.  Am I just being paranoid?

KB: When dealing with the Broken Man, being paranoid is not necessarily an unhealthy reaction.

But no, you’re fine. What Starfighter’s realizing he can’t perceive is the same threat that the Broken Man says has “gotten to” the major heroes already. Starfighter’s cosmic senses are finely-honed enough for him to feel that he’s missing something, but he doesn’t know what. 5. Starfighter’s story illustrates one of the great joys of Astro City:  Being able to see characters get ANY sort of ending, much less a happy one, thanks to the “real-time” nature of the series.  Do you find any drawback to not having unchanging, ageless characters and a sliding timeline ala Marvel and DC?

KB: The only drawbacks I can think of, aside from having to make up new characters to step up as the older characters retire, which is actually fun, is that if I want to tell stories about characters at a certain age, that time period can pass me by. I wasn’t able to get the book out regularly at the time Brian Kinney came back to Astro City as the Confessor, so I didn’t get to tell stories about him as a newcomer to the role. By the time I did get back to him, it had been so long that he’d be an experienced hero.

Still, I can always tell those stories as a period setting — there’s nothing saying I have to tell stories set only in the present day. Indeed, we’ve done stories of other eras often. So no, that’s not a real drawback. I wouldn’t recommend Marvel or DC go to real-time storytelling, but for ASTRO CITY, it opens up so many possibilities that any difficulties are overwhelmed.

6. Can you give us a quick tease of what to expect in your first-ever Astro City issue #23? Astro City #23: What do you do when you’re a talking gorilla, and all your life you’ve wanted nothing more than to be a drummer in a rock & roll band? That’s right, you go to Astro City. But from there, well, things are never all that simple. Also featuring the First Family, Honor Guard and more. Part 1 of 2.