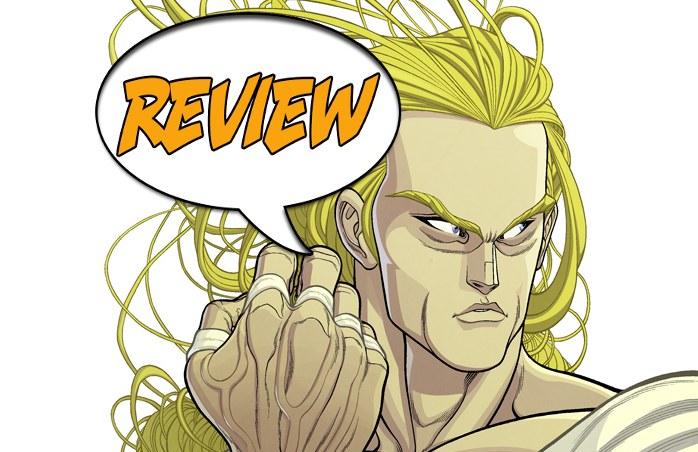 The Legacy of Luther Strode #1 Review

After a few years and a couple of delays, Justin Jordan’s final chapter in the Luther Strode saga has hit stands.  What has happened to Luther and his girlfriend after being caught by the cops?  Who else will try to come after them?  How much evisceration will there be?  Major Spoilers has the answers in The Legacy of Luther Strode #1 review! Previously in Luther Strode: After learning more about his powers, where they come from and that there are others like him, Luther and his girlfriend Petra fended off students of Cain and had a battle with Jack the Ripper.  Things got bloody at a mall.  Really bloody.  Then the cops showed up.

I FEEL LIKE MY HEAD JUST EXPLODED WITH AWESOMENESS

Both of Justin Jordan’s Luther Strode series have been insane, over the top action and tons of fun.  I love the them and have been waiting anxiously for this follow-up.  To my utter surprise, issue one came out this week (I’m slipping in my old age) so I had to read it right away.  As expected, I was blown away.

There is an insane opening where ages ago Samson slays an entire army of soldiers coming to kill him.  An army that looks to be a million strong.  The story then immediately picks up where The Legend of Luther Strode ended as Petra and Luther have been arrested by cops.  Standing outside a mall of dismembered bodies covered in blood will do that to you.  There is a great escape sequence and we jump five years to present day where Luther and Petra have their own hideout in the woods.  Of course things eventually get out of hand as Luther finds more students of Cain have shown up, murdering a restaurant of people just to get Luther’s attention.  Fighting ensues.  This has been the one of the shining parts of Luther Strode but also its weakness.  The action is insanely over the top, violent and extremely fun but the stories basically boil down to large, drawn out fights.  There is some narrative involved but I find it a bit thin.  That’s not to say I didn’t enjoy myself and I found this issue had some good story moments and setup.  Luther and Petra’s relationship has grown a bit and it was cool seeing them work together to stop their enemies.  The violence ramps up each page and every time I thought it couldn’t get cooler, it did.  This isn’t a book for those with weak stomachs but if you like seeing a head split in half, you’ll love this one.  The ending is a good tease and I’m hoping it means the lore and back story of Cain will be expanded on.

Looking at Tradd Moore’s work from The Strange Talents of Luther Strode to The Legacy of Luther Strode #1 shows his progression.  All look great, but there is some truly jaw dropping work happening here and the detail is extraordinary.  The second and third pages are a double page spread of Samson killing the army on the top half, with him standing amidst all the dead bodies on the bottom.  Nothing is shorted.  Each and every feather on the helmets are drawn along with every body extending to those in the very background, giving Geoff Darrow a run for his money.  It had someone looking for Waldo amongst the many, many bodies even though he isn’t there.*  Moore is no stranger to action and his hyper stylized style rocks every scene.  From a bullet exploding through a head to cars and trucks breaking, it all is absolutely original.  He uses a technique where when characters break through objects such as walls, he draws the moment in progress rather after.  Instead of getting the broken pieces flying outward, they appear curved around the characters as if they’ve not been fully blasted away.  When giant force hits the ground it bends and sends square pieces in waves.  It’s hard to explain without seeing it for yourself and the closest comparison I can think of is in Matrix Reloaded when the truck is smashed during the highway chase and the trailer curves with waves as it starts to compress.  There’s so much going on and with the amazing coloring by Felipe Sobreiro it makes a book full of action extremely exciting to read.  The style may turn people off but it’s hard to deny there’s wonderful things happening.

*I want to thank Rick (you know who you are) for this quote even though he’s probably not reading this.

THE BOTTOM LINE:  UNIQUE IN EVERY WAY

There is nothing quite like reading an issue of Luther Strode.  You get crazy violent action, cool stylized and frenetic artwork and a hell of a fun read.  If you don’t enjoy violence, this might not be the book for you and readers will benefit from reading the first two chapters first.  I’m dying to see how Luther’s story ends and what Justin Jordan and Tradd Moore have in store.  Plus, for $3.99 you’re getting forty pages of your mind being blown, so it’s well worth your money.  Not only should you read this book, but go out and buy the others.  It’s worth it for the art alone and the story is cheddar on the cheese (Whatever that means).

The Legacy of Luther Strode #1

This book has great action and spectacular art. Action is the name of the game with over the top violence. A great start to the ending of a great trilogy.