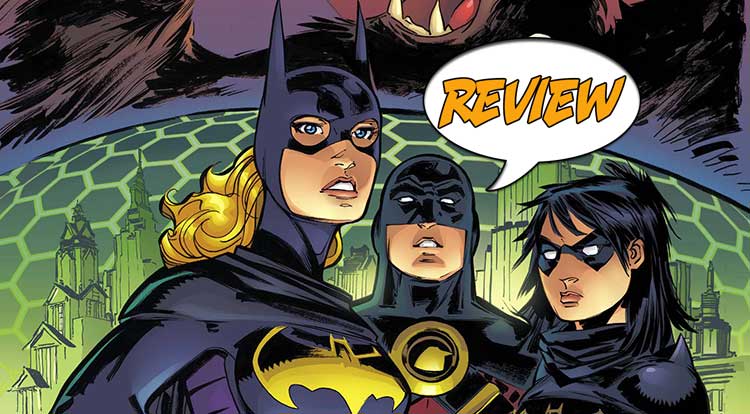 OMG! My favorite Bat Family members are together again in one book! Will Batgirl, Black Bat, and Red Robin survive Convergence? Previously in Batgirl: Having had her ups and downs as Spoiler, Robin, and Batgirl, Stephanie Brown attempted to lead a normal life before the events of Flashpoint. Robin (now Red Robin), while working with Batman, is his own hero, and with Jason Todd and Damian Wayne occupying more and more of Batman’s time, Tim Drake Wayne has little reason to pall around with The Dark Knight. Cassandra Cain, once the most powerful of anyone who went by the name of Batgirl, became disillusioned with being a costumed superhero following the death and return of her mentor, Batman. She did suit back up as the hero Black Bat, but then Flashpoint happened, and the Gotham we knew was swept away forever.

GIVING THE FINGER TO EVENT COMICS

It’s been a year since Brainiac snatched Pre-Flashpoint Gotham out of the time stream and put it under the protective bubble on Telos.  In that time, many heroes have come to grips with losing their powers (see Convergence: Justice League #1), while others have continued the fight to rid the city of crime and keep the citizens safe (see Convergence: Batman and Robin #1). For those that essentially gave up being a costumed hero, the year under the dome has been an interesting one.  For Stephanie Brown it’s been a year of moving ahead with her life in a positive way, but writer Alisa Kwitney gives us a look at the year under the dome via Stephanie’s flashbacks.

Having read Convergence #1 I thought this was going to be a giant fight in every issue, and to an extent it is – Stephanie is called up as one of Gotham’s heroes and she must fight another “champion” if Gotham hopes to survive – but this issue does give us a look at what happened soon after the dome went up.  As I feared, the worst in people came out, with some people accepting their fate, while others flipped out causing anarchy and death around the city.  This was too much for Stephanie, and while she didn’t have super powers to lose, she did lose the urge to fight, walking away from her role as Batgirl. Through the story, we learn that Poison Ivy’s garden is indeed providing all the necessary fruits and vegetables for the city, and that meat is in short supply, which has caused  many in the city to start raising hamsters as a meat source.  While the big fight sequence is going to be interesting in the spine book of the event, it’s reading between the panels and seeing how society managed to stay together that is a real treat.  Seeing Stephanie and Cassandra as roommates is great, even if Cassandra’s desire for meat creates the major character conflict in the issue. Stephanie has been out the hero business for a year, which prompts Cassandra to point out she’s not in shape and would have a difficult time being a hero again. Tim (as Red Robin) agrees with the assessment, which may be a bit harsh to hear from her long time love interest, but it is true.

It’s a good thing Stephanie is smart and has figured out that not fighting is often the best way to win a fight.  In a sense, she gives the finger to event comics that want heroes to fight to the death.

There are two sequences in this comic that show Stephanie still has it together. The first occurs when she leaves the clinic she is working for and she and her co-worker are accosted by Killer Moth. Instead of fighting, instead of letting Killer Moth get the best of two women in an alley, Stephanie does the best thing possible – she tells Killer Moth off then tells him there is a support group he should check out. Killer Moth’s reaction is priceless as he doesn’t know what to make of the situation. Coupled with Mr. Freeze’s reaction in Convergence Batman and Robin #1, it signals that maybe DC is going to do this event right by giving the heroes an out by simply allowing them to use their brains to save their worlds.

Stephanie’s finger to event comics continues when the dome comes down and citizens are trying to flee to city to see what is outside the dome. While Black Bat and Red Robin try to fight the crazed crowd, Stephanie once again saves the day, by telling the throng that she has a gas that will blind them if they don’t disperse. The crowd calms down and once again, without throwing a bunch, Stephanie saves the day.  I just hope she’ll be able to win the fight as she takes on Gorilla Grodd in the next issue.

Alisa Kwitney nailed the writing of this issue. The nostalgia factor was high for this book as it does feature three of my favorite members of the Bat Family, and I can’t think of a better way to handle the story and situation than the way Kwitney delivered. Smart thinking, fantastic character development, remorse, and the hero facing her greatest fear makes for excellent storytelling in this issue.

I was going to go into a long treatise on why the art rocks in this issue, but I’ll keep the TLDR to a minimum in this review by simply stating that the art from Rick Leonardi, Mark Pennington, and Steve Buccellato is perfect. Bringing Leonardi back to the series he worked on from 2003 to 2004 is inspired, and continues to crank up the nostalgia for what we’ve been missing these last couple of years. Mark Pennington cleans it up and delivers crips lines throughout the book, and Steve Buccellato’s colors are wonderful as he gives us the hues and tones of a dark and gritty Gotham that contrasts with the harsh warm colors of the dessert outside of town. With the right funds in the bank I would work to buy every page in this issue to hang on the wall in the Major Spoilers HQ.

DC plans to make stories that are canonical instead of in continuity. Understanding that philosophy gives me hope that we’ll see Stephanie, Cassandra, and Tim as a dynamic team following Convergence.  I understand that characters are going to die, but this issue gives me hope that DC will give this group a chance to continue. If they do, I really hope the creative team sticks around, because they knocked this one out of the park. Convergence: Batgirl #1 does’t feel like a tie-in to an event comic as much as it is simply a really great comic, featuring a strong female protagonist and supporting cast, with excellent art to bring it all together.  This is a must read comic this week, and deserves the highest marks.

Convergence: Batgirl #1 does't feel like a tie-in to an event comic as much as it is simply a really great comic, featuring a strong female protagonist and supporting cast, with excellent art to bring it all together.