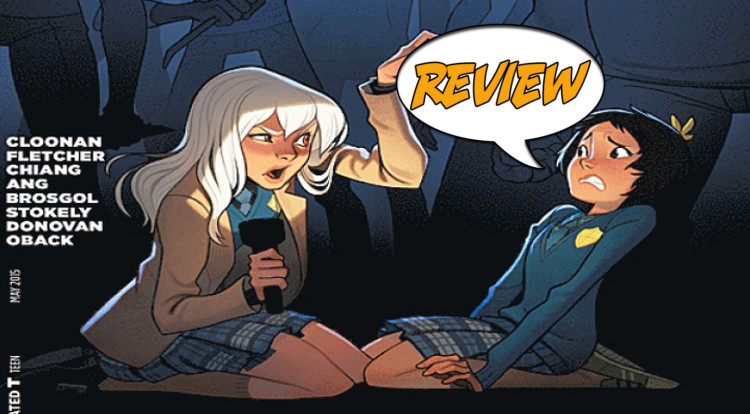 Gotham Academy Endgame #1 tells three different joker stories before revealing something about the school’s headmaster in the final pages. Gotham Academy Endgame #1 has five different writers working on it and the issue feels like that. Some of the moments are really strong – Becky Cloonan and Brenden Fletcher pen the spine story and it is as amazingly well-crafted and thought out as the rest of the issues in this series to date. Some of the sides stories that are penned by other writers – who also double up and take on the artistic responsibilities – seem well suited to the characters whose voices they are written in, although perhaps a little meandering at times.

Cloonan and Fletcher do a good job at telling a story in Gotham Academy Endgame #1 that fits into the unique voice this series has been developing since its premier, while at the same time being beholden to the Endgame storyline that is crossing all the Batfamily stories this month. The girls of Gotham Academy – Olive, Pomeline and Maps – tell ghost stories with one of their teachers, Professor MacPhearson, that all tie directly back into the Joker or a Joker analogue.

Gotham Academy Endgame #1 also has an awesome throwback line to the Joker as he appeared in Batman: the Animated Series!

The only unfortunate thing about Gotham Academy Endgame #1 is that the storyline readers have been invested in – with its own obstacles and consequences – are completely stalled in order to tell a story that in no way serves the overarching narrative. True, Cloonan, Fletcher and the rest of the issue’s writing team give these girls some nice moments and they crack some cute jokes, but there is not much revealed about their natures or their past experiences. More than anything Professor MacPhearson gets highlighted.

The different incarnations of the Joker speak to his strength as a villain, but long before Gotham Academy Endgame #1 came along readers have known that the Joker was the paramount villain of the Batman universe – if not the DCU as a whole. The most interesting part of the issue comes in the final pages once all of the tall tales have been wrapped up and Cloonan and Fletcher drop a revelation about Hammerheard, the headmaster of Gotham Academy, and the sinister nature he has been suspected of for some time now.

Gotham Academy Endgame #1 is not bad, although it suffers from being tied to the notes of editorial and the outstanding creative team having to bow to a series-wide event.

Much like the story of Gotham Academy Endgame #1, the art is something of a mixed bag. Jeff Stockley is the fill-in artist on this issue and he does a solid job on the spine of the story. It’s fun to see these familiar characters and settings under somebody else’s aesthetic and Stockley’s linework is so precise compared to Karl Kerschl’s fluidity that it highlights new elements of the characters and Gotham Academy as a character.

For instance, Mrs. MacPhearson’s Scottish folktale drawn by Joy Ang is lovely and her painterly work really feeds the mythological base that her narrative is coming from. In contrast, Clio Chiang takes on the art duties for Gotham Academy Endgame #1’s story from Pomeline’s point of view and it comes across as less accomplished than the other styles that have been highlighted in this issue. The story itself is probably the weakest of the bunch, but where the art could have elevated a lacklustre narrative it falls short.

Overall, the art of Gotham Academy Endgame #1 feels out of place when taken into consideration against the rest of the work that has been coming out under this new title.

THE BOTTOM LINE: FOR FANS

If you are a big fan of the Gotham Academy series than Gotham Academy Endgame #1 is probably worth picking up though, unfortunately, readers aren’t going to learn a lot about this new cast of characters.

Gotham Academy Endgame #1 is not as good as the rest of the books in the main series.