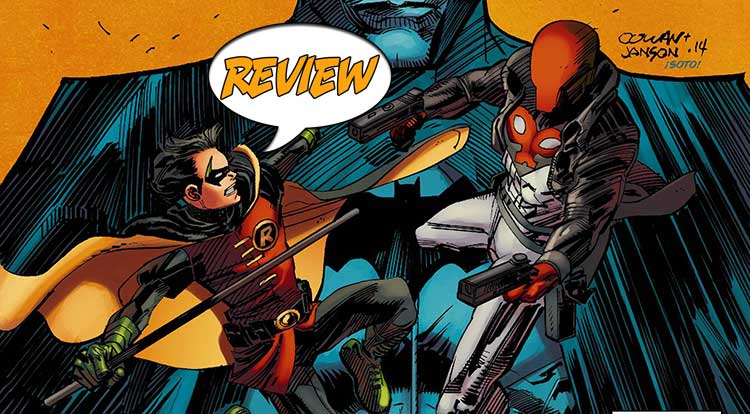 Finally! The Pre-Flashpoint DCU is back, and Batman and Robin take the center stage to fight the badguys, feed the homeless, and come to grips with having to kill or be killed as the dome comes down in Convergence: Batman and Robin #1. Previously in Batman and Robin: Having discovered he fathered a love child with Talia al Ghul, Batman (secretly Bruce Wayne) comes to grips with fatherhood, taking on a new Robin, and having to deal with his other jilted children.

I only really liked Damian Wayne when he died, and Batman figured out how much the terror of Gotham meant to him.  With that story in the rearview mirror, being dropped back into a world pre-Flashpoint is somewhat refreshing, even if it means Damian is back to his old ways.  The return of old Damian also means the return of Jason Todd as The Red Hood, and even though there is still animosity between Batman and Jason, the two have come to terms with one another, which doesn’t sit well with Damian. The overall theme of sibling rivalry syndrome is presented really well in this issue, and seeing Damian and Jason fighting over who is the favorite child seems very much in line with the way both characters were developing prior to Barry’s screwing up of the time stream.

For fans of the pre-Flashpoint DCU, this issue drips with nostalgia for those longing for “the good ol’ days”. Favorite villains like Poison Ivy, Man-Bat, Black Mask, Penguin, Killer Croc and Mr. Freeze show up, and there is plenty of fighting between everyone in the issue in a way that makes sense from the overall story perspective.

Though we are dropped into the story shortly before Telos makes his cage match proclamation, it is the backstory elements of what has been going on in the trapped city of Gotham City that I found really interesting.  This Gotham City has been under the dome of Telos/Brainiac for a year, and in that time, there has been some actual good happening. Poison Ivy has taken it upon herself to use her powers to turn Gotham Park into a huge garden to feed everyone. It is this one element of the story that indicates to me that real positive moments are going to be seen in the entire Convergence series. Batman is fully on board with Ivy’s change of heart, as he and Robin do everything they can to protect this food source. There’s even a interesting moment when Mr. Freeze gives up in the middle of the big fight to proclaim, “I’m not even interested anymore. What is the use in any of this?”   Instead of fighting for resources, prolonged containment under the dome seems to cause the villains to see that there are more important things to focus on instead of fighting over who controls the city. A similar situation happens in this week’s Convergence: Batgirl #1.

I really liked the overall themes Ron Marz presents in this story, and though it is part of an event series, I really liked this all-too-brief return to the world that I spent so much time reading about.  Of course that doesn’t mean there isn’t a bigger problem brewing in the background.  If you have read Major Spoilers’ review of Convergence: Justice League #1, you know that those heroes are also in the same Gotham City as Batman, yet there is no indication that the Bat Family are aware or work with the remaining Justice Leaguers.  So when the dome does come down, and the neighboring cities come a calling to kill everyone (New York City Angor for Batman, and Flashpoint Gotham City Aquaman in Justice League), it seems like there will be little to no collaboration between the heroes.  If this is how it plays out in the next issues, it is a big missed opportunity for the entire event.

COWAN AND JANSON NAIL IT

I would say the only two problems I have with the art in this issue are the overly amped Killer Croc and bulkier than normal Mr. Freeze appearances.  While fighting Batman, Croc’s size should easily overpower the Caped Crusader, and the “scratches” that Batman sustains in the fight should be more life threatening.  Other than those two concerns with character rendering, I really liked all of the art in this issue. It’s nice to see Denys Cowan and Klaus Jason continue their collaboration after all these years and their work continues to impress and inspire.

I read this issue after reading Convergence #1, and I was prepared to be disappointed. Fortunately there are so many interesting world building elements and interpersonal issues between characters that I was pleasantly surprised that this issue, while full of fighting, wasn’t full of fighting that was forced upon them. Nostalgia will factor into the reasons why some readers will pick up this issue, but the story and themes presented give us reasons for “why we fight” instead of simply devolving into “let’s fight!” Convergence: Batman and Robin #1 is worth picking up even if you don’t plan on following every story in the Convergence event.

Nostalgia will factor into the reasons why some readers will pick up this issue, but the story and themes presented give us reasons for "why we fight" instead of simply devolving into "let's fight!"