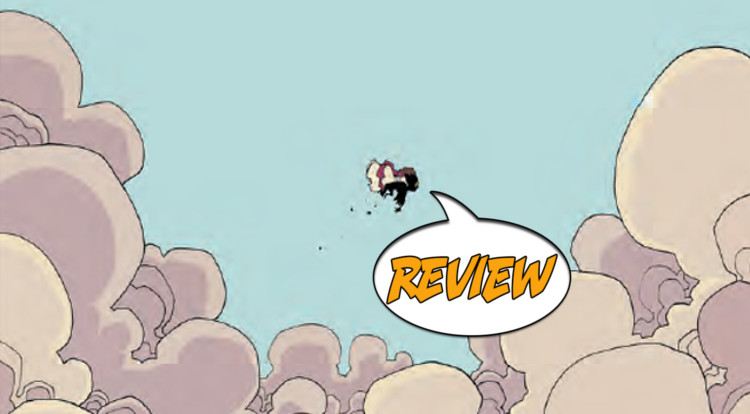 Feathers #4 brings Poe and Bianca to the City inside the Wall and reveals something important about the Guide. Previously in Feathers #3: Poe and Bianca are kidnapped by the city guard.

A REAL SENSE OF DANGER

Feathers #4 is the scariest issue yet! Writer Jorge Corona has done a great job at building the stakes and the revelations about the world Poe and Bianca inhabit. The guards have added an aspect of danger to the story that the mice alone were never possessed and they’ve forced a lot of understanding about Poe and his good nature that some of the mice were unable to see in the face of less present threats. For an all-ages comic issue Feathers #4 does a great job at raising stakes.

Poe and Bianca spend the majority of Feathers #4 fleeing from clear and present danger, although Corona is clever enough to not have the entire issue be a prolonged chase scene. To his credit, he has the child characters be the ones to make attempts at diplomacy throughout Feathers #4 with the guards stepping into the role of unwilling-to-listen. The paradigm shift is not a new one, but it really, really works in the narrative here.

The mice – and Z in particular – have been obstacles to Poe and Bianca completing their mission to get Bianca back inside the wall and Corona manipulates them into fully allying with the protagonists before Feathers #4 is over. It’s refreshing to see all the children of this city and this world because so many subsections of them have been at odds since the story started. However, just in time for Poe to be accepted as a friend and protector rather than foe and enemy Corona moves our black-and-white representative protagonists to a new geographical locations.

The world inside the wall where Bianca originally came from has been lauded throughout Feathers #4 as an affluent place with all the safety and security that one could hope for. The mice and Poe and everyone else in the maze holds that world up on a pedestal and readers have seen inside the wall – albeit briefly – in previous issue, but in Feathers #4 it can be seen for the truly foreign place that it is. In a lot of ways it’s reminiscent of places like the Capital in the Hunger Games franchise – nobody there has any scope of what is going on in the real world. This also allows Corona to heighten the intelligent child/ignorant adult paradigm that has been developed.

Inside the wall Corona also brings readers deeper into the mysticism (bordering on religion), of Feathers #4. The Guide and the stories that swirl around the pale icon have been a part of the series from the start and readers are embarrassed right along with Bianca when the revelation comes that she is nothing more than a stone statue. Corona very nearly destroys the magic in his world until Poe comes along to shake up readers’ expectations. The weird little bird boy of a protagonist readers have been following has deep spiritual ties to the Guide that are revealed in Feathers #4 and may serve to keep him alive a this story wraps up.

Writer Jorge Corona is also the artist on Feathers #4 and he does excellent work. Neither writing nor art suffers, in fact, both serve to bolster each other and give the narrative a real sense of importance.

In Feathers #4 Corona really takes the opportunity to stress the differences between light and dark as an aesthetic and in their representations. Bianca is pale and soft in comparison to Poe’s dark and spiky, but when the Guide is shown for the first time she is very pure and pale. It’s a compelling design choice with the great power she wields and having dark little Poe as her messenger on earth – or so it would seem.

Feathers #4 also shows a lot of the scale of the city to readers. The maze is exactly what it sounds like and when the mice navigate their way through all its twists and turns they themselves blend into the nooks and crannies of their street home. The adults that make up the Guard stand out, visually, as not belonging in this place and the sense of danger their instil is evident from first glance.

Jen Hickman does beautiful work on the colours of Feathers #4 and she really grounds the fantastic qualities of the story with earthy browns and grey. These tones also aid in the stark contrasts between the white and black that she employs in character design.

Feathers #4 is picking up steam as the series rolls toward its conclusion. It’s dramatic and interesting and Poe gets a lot of great singular moments.

Feathers #4 is an incredibly strong issue that speaks to the magical connection one of the protagonists has with a Goddess.

Feathers #4 is an incredibly strong issue that speaks to the magical connection one of the protagonists has with a Goddess.