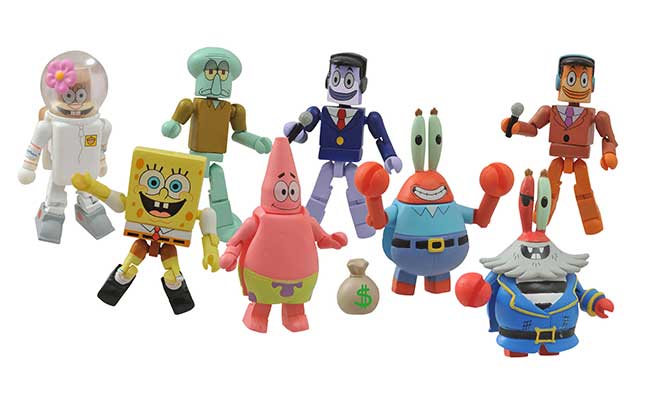 Following the successful launch of the Teenage Mutant Ninja Turtles collection, Diamond Select Toys announced today the expansion of its Nickelodeon partnership with the release of a brand-new SpongeBob SquarePants Minimates line. The collection will include SpongeBob, Patrick, Squidward, Mr. Krabs, Sandy, Grandpa Redbeard, Perch Perkins and Plankton designed as 2-inch-tall mini-figures with multiple points of articulation and interchangeable parts and accessories.

The long-running animated series, SpongeBob SquarePants, has been a hit for kids and adults since its debut, and is still going strong with new episodes in the works and a hit movie, The SpongeBob Movie: Sponge Out of Water, in theaters now.

“Most cartoons come and go, but SpongeBob has truly become an institution,” said Chuck Terceira, President of Diamond Select Toys. “The kids who were raised on him are joining the adults who’ve always loved him, and we’re creating some great toys that are fun for the collectors, as well as for the kids who are just meeting him for the first time. We’ve definitely had fun adapting the Minimates block figure style to crabs and squid and starfish!” The first assortment of SpongeBob SquarePants Minimates will be available starting this week at comic book shops, specialty stores and Toys“R”Us.

ABOUT DIAMOND SELECT TOYS AND COLLECTIBLES, LLC
Diamond Select Toys and Collectibles, LLC was founded in 1999 by sister company Diamond Comic Distributors, Inc. Envisioned to create unique and exciting collectibles for children and adults alike, the company has licensed a variety of pop culture properties to be turned into merchandise. In 2007, Diamond Select Toys acquired select assets of the New York-based Art Asylum, creators of the global Minimates brand. Minimates have been recognized as the #1 selling block figure in the world and were the first toys ever to be inducted into the ToyFare Hall of Fame in 2007. With partners such as Nickelodeon, Marvel Enterprises, Universal Studios, Twentieth Century Fox, Warner Bros. and Sony Pictures, Diamond Select Toys and Collectibles produces a large range of products based on a wide variety of properties, and is headquartered in Hunt Valley, MD. For more information, visit www.diamondselecttoys.com and www.artasylum.com

About Nickelodeon
Nickelodeon, now in its 35th year, is the number-one entertainment brand for kids. It has built a diverse, global business by putting kids first in everything it does. The company includes television programming and production in the United States and around the world, plus consumer products, online, recreation, books and feature films. Nickelodeon’s U.S. television network is seen in more than 100 million households and has been the number-one-rated basic cable network for 20 consecutive years. For more information or artwork, visit http://www.nickpress.com. Nickelodeon and all related titles, characters and logos are trademarks of Viacom Inc. (NASDAQ: VIA, VIAB).