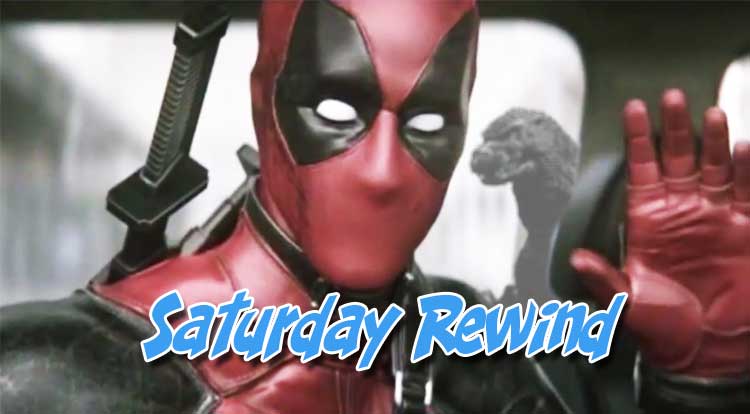 Another big week of announcements, including Batman V Superman trailers, Deadpool ratings, Godzilla directors and more! No more time to waste, let’s get to it! Were you left underwhelmed by the Gareth Edwards directed Godzilla last summer? Maybe the Godzilla movie from the original studio will be more of your style. Toho announced their picks for directors for Godzilla 2016 as Hideki Anno and Shinji Higuchi previously did Neon Genesis Evangelion and also are the directors of the live-action Attack on Titan adaptation.

Toho released a statement and a promo image along with the announcement:

Ever since Hollywood announced that ‘Godzilla’ was to be resurrected, the expectation for another Japanese Godzilla grew. And if we were to newly produce, we looked into Japanese creators who were the most knowledgeable and who had the most passion for Godzilla.

Deadpool will of course be rated-R

If you follow Ryan Reynolds you might have seen his tweets on Wednesday discussing that the upcoming Deadpool movie will be rated PG-13.

#deadpool – So we make the blood green. (Views expressed here are mine – not necessarily those of adorable, taint-punchers releasing films)

A PG-13 #deadpool will still have 4th wall breaking, a shit-ton of action and at least 3 chimichangas. Zero need to panic. I promise.

Do you remember what Wednesday was? Take a close look at the timestamp on those tweets.

Later in the day, a video from JoBlo.com looking to be an interview between Extra host Mario Lopez and Reynolds was released that cleared up the rating for Deadpool.

Ryan Reynolds Addresses the Deadpool PG-13 Rating (HD) JoBlo.com ExclusiveLadies and gentlemen, we at JoBlo.com are proud to bring you the first exclusive fo…

Tom Hardy is on for more Mad Max

After each new teaser and trailer the excitement over Mad Max: Fury Road continues to grow, and I even think leaves Michael Bay with a sense of explosion envy. And it seems like more will be coming in the future.

Esquire writer Miranda Collinge wrote that Hardy is “attached to a further three Mad Max films” and that Hardy himself said “Everything’s based on figures and how things are perceived. Inevitably, it’s a business.” With the buzz around the film from critics and fans alike it seems that the box office figures will surely justify for sequels from the studio.

Mad Max: Fury Road does open on May 15, which is just two weeks after Avengers: Age of Ultron hits theaters, so hopefully that buffer proves valuable for both films. Of course if Fury Road is “fu***** unbelievable” like Tom Hardy says then the film should be just fine. Speaking of Mad Max, Collider broke news this week stating that the first trailer for Batman V Superman will be attached to Mad Max: Fury Road. This seems like a no-brainer move for Warner Bros. as Fury Road is their early blockbuster movie release at will be coming right on the heels of Age of Ultron, which will have a new Star Wars trailer attached to it.

The big question is when the trailer will debut online. With Age of Ultron releasing May 1 a lot of marketing and buzz will be happening leading up to that release date. Then Warner Bros. has to consider that a new Star Wars trailer will be hitting online right at the end of April when the first showings of Avengers begin.

My guess is that the trailer will be released online May 11, the Monday before Fury Road comes to theaters. Releasing on that day will contribute to a whole lot of chatter online about the film combine that with the postive press Fury Road is already receiving and it should create a box-office super storm that will make Warner Bros very happy.

Whenever the Batman V Superman trailer releases, let us not forget that the film’s release date isn’t until March 25, 2016.

And, finally, I will leave you with this amazing fan made trailer for a Pixar X-Wings movie that features a whole lot of voices that you will surely be familiar with.

One can only hope that Disney will put a film like this in their 20-year plan for the Star Wars franchise.

What happens when the people who made Cars & Planes get their hands on Star Wars? X-Wings. That’s what happens.Seriously though, I am in no way affiliated wi…