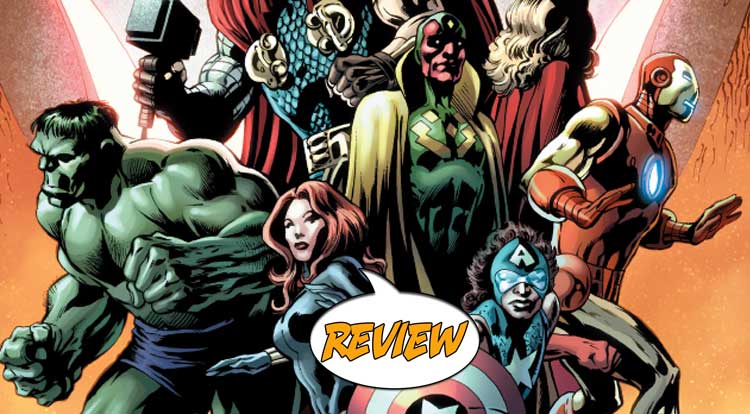 Ever since the Age of Ultron, time in the Marvel Universe has been broken.  Now, The Avengers must come together across the ages to help knit things back together and prevent the supremacy of their future robot overlord.  Your Major Spoilers review of Avengers: Ultron Forever #1 awaits!

Previously in Avengers: Ultron Forever: Created by Henry Pym, the artificial intelligence known as Ultron has been through many iterations, each one more dangerous than the last.  His most recent scheme led the Avengers to make a desperate attempt to prevent him ever having been created, even though they should have been quite clear that all this would do is create an alternate timeline.  Still, the attempt was successful on the surface, leaving the time-stream broken and bringing about a number of big changes.  What dos the adamantium android have up his notable lack of sleeves this time?

Say what you like about Marvel Comics, they know how to start a big crossover schmageggi.  This one kicks off in the near future, as a villain known as The Golden Skull toasts his victory in a flooded, ruined Manhattan, only to be immediately confronted by his nemesis Captain America.  She quickly engages his thugs in battle, reminding the villains that she’s more than just a woman with a shield, she’s the daughter of two of the toughest heroes in Avengers history.  We know them as Luke “Power Man” Cage and Jessica “Jewel” Jones, and she’s as tough as both put together.  Unfortunately, she’s also quickly pulled out of the time-stream by a mysterious energy portal.  Likewise, the modern-day Vision and Black Widow are abducted, as well as past versions of Thor, The Hulk, and Iron Man and the current version of Thor from slightly in the future.  The heroes are confronted by someone claiming to be Doctor Doom who tells them that he has summoned them to help him defeat the menace of Ultron once and for all.  But, as The Vision notes, there’s something strange about this Doctor Doom…

AND WE HAVE A MYSTERY

This issue is all about introductions, and they’re all handled well.  We get a quick glimpse of The Vision’s new attitude, a nice bit with Captain America in action, and even the current Thor trying to warn her past compatriots about future menaces.  (Fortunately, the Thor Odinson of the past warns her against changing time.)  The mission is put together fast, and moves even faster, and the question of who is really under the hood and faceplate of Doom is quickly lost as the mission takes a shocking turn.  What happens if someone from the past dies in the future?  As the issue comes to an end, we’re about to find out.  The biggest success of this issue is the spectacular art of Davis and Farmer, once again delivering the smooth line work, complex facial expression and amazing battle sequences that I’ve come to know them for, but Al Ewing’s script is complex without being oblique and really makes the interactions fun.  Black Widow commanding a brutal, Pre-Avengers Hulk, Thor meeting his successor, and James Rhodes gleefully using the armor’s rocket-skates to the confusion of the Vision are all entertaining bits, and the cliffhanger succeeds in its intent to shock the reader…

I’ll be honest, I came into this issue expecting a forgettable throw-away movie tie-in, but what I got was a story more in the vein of ‘Avengers Forever’ than the bloodless in-name-only one-shot I worried it might be.  The parallels with AF are certainly intentional, but end up being the weakest part of the issue for me, with the presence of two Thors recalling that stories use of two Hank Pyms, and several other moments that harken back to Busiek’s story.  Still, it’s a story that I enjoyed reading and one that debuted a new favorite character in Danielle ‘Captain America’ Cage, leaving Avengers: Ultron Forever #1 with a pleasantly surprising but well-earned 4 out of 5 stars overall.  Now, I have to read the rest of the series and see if the quality holds up…

Nice character work, at least three mysteries and a nice balance of characters make for an impressive debut.