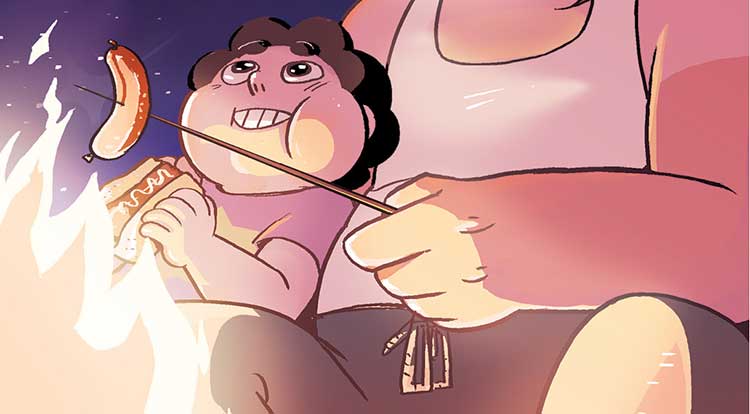 Celebrate the bond between father and son with Steven Universe: Greg Universe Special #1

“The Steven Universe animated series never stops outdoing itself, consistently delivering powerful characters and deeply moving stories,” said BOOM! Studios Editor-in-Chief Matt Gagnon. “That’s exactly the type of storytelling we strive to stay true to in the comics. For this special issue we wanted to focus a little more on the relationship between Greg and Steven; even though Greg doesn’t have Gem powers, he’s still one of the most important people in Steven’s life, and the bond between father and son presents its own kind of magic.”

Steven Universe and the rest of the Crystal Gems are bonafide heroes, saving Beach City day after day. But you know who else is a hero? Greg Universe! Steven Universe: Greg Universe Special #1 is a collection of shorts that features father-and-son fun, as Greg teaches Steven some valuable life lessons. Steven Universe: Greg Universe Special #1 arrives in comic shops on April 29th with a main cover by Ru Xu (Steven Universe) for the price of $4.99 under Diamond order code FEB151183. Also available in a limited quantity is a retailer incentive cover by Fellipe Martins (Regular Show).

The Final Order Cutoff deadline for retailers is April 6th. Not sure where to find your nearest comic retailer? Use comicshoplocator.com or findacomicshop.com to find one! It’s also available for order directly from boom-studios.com.