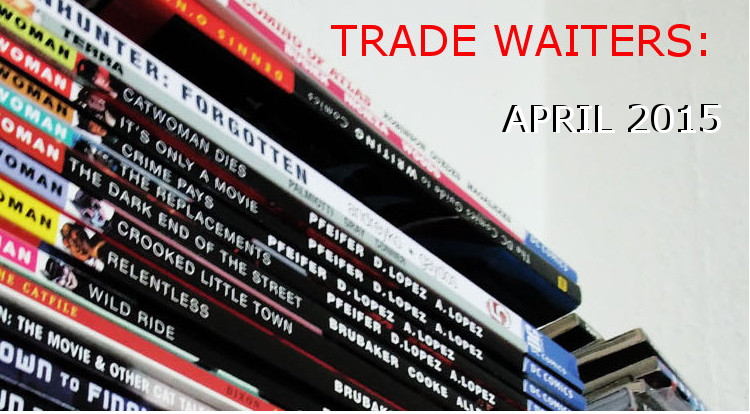 Are you looking for something to read during the April Showers? This is what we all had to say: Lumberjanes Vol 1
Writers: Noelle Stevenson and Grace Ellis
Artist: Brooke Allen
Publisher: BOOM! Box
Price: $14.99
In Stores: April 1st, 2015
ORDER ON AMAZON
“All of the great people here at Major Spoilers have been raving about Lumberjanes since the first issue came out months ago and I have just been dragging my feet about reading it. With the first volume coming out in April collecting the first four issues, it seems like the time is now to get into the series. If Stephen, Ashley, and others won’t stop talking about it, I know it is worth my time and money.” – Zach

Lumberjanes Vol 1
Writers: Noelle Stevenson and Grace Ellis
Artist: Brooke Allen
Publisher: BOOM! Box
Price: $14.99
In Stores: April 1st, 2015
ORDER ON AMAZON
“There’s a weird stigma about all-ages comics, that they’re all kids’ stuff and lack dramatic tension and blah blah blah fishcakes.  Lumberjanes puts the lie to all that nonsense, with a strong cast, stories that are dramatic and engaging, no matter what your age, and the realization that “girl” is not a personality type.  It’s cool young-adventure stuff without the usual baggage, with a cast of cool characters and really wonderful interactions and dialogue.  All-ages doesn’t have to mean “silly”, and diversity certainly doesn’t equal “bad.:  If you don’t believe me, drop 15 bucks, sit back and enjoy Lumberjanes.” – Matthew Rat Queens Vol 2 – The Far Reaching Tentacles of N’Rygoth
Writer: Kurtis J. Wiebe
Artist: Roc Upchurch and Stjepan Sejic
Publisher: Image Comics
Price: $14.99
In Stores: April 29th, 2015
ORDER ON AMAZON
“I fell behind on Rat Queens in my monthly stacks, but this punk-rock, ersatz D&D adventure book is way too good to give up on. So onto the trades it is! And actually, at $3.50 per issue, this trade is actually more bang for the buck. And here’s where I thought I couldn’t be any happier reading Rat Queens …” – George Batman Earth One Vol 2
Writer: Geoff Johns
Artist: Gary Frank
Publisher: DC Comics
Price: $24.99
In Stores: May 6th, 2015
ORDER ON AMAZON
“Geoff Johns continues his alternate take on the origin of Batman. Plus we get to see the baddest version of Alfred in the multiverse! It’s guaranteed that you will see some shades of this story in Batman v Superman. Volume One was a great new take; here’s hoping volume two is just as fresh” – Jason Elfquest: the Final Quest TBP
Writers: Wendy and Richard Pini
Artist: Wendy Pini
Publisher: Dark Horse Comics
Price: $17.99
In Stores: April 1st, 2015
ORDER ON AMAZON
“Quality tends to rise above the rest, and that’s why Elfquest continues to be both a critical and financial success. In this “final” quest, the Pini’s take Cutter and his friends “where no elf has gone before.” They’ve created a fleshed-out world that fans of fantasy and those who may not enjoy it as much will enjoy. If you haven’t been reading Elfquest, I highly recommend both this trade and any other volumes you can get your hands on!” – Wayne Don Rosa’s The Life And Times Scrooge McDuck Volume 1 Artist’s Edition HC
Writer: Don Rosa
Artist: Don Rosa
Publisher: IDW
Price: $124.99
In Stores: April 15th, 2015
“Though Don Rosa didn’t create Scrooge McDuck, he might as well have.  This comic proves why Scrooge is the best Duck in the family and sheds some light on how he got his fortune and just why he’s so cranky.  With this story, Rosa shaped Scrooge for years to come, while also respecting what came before.  This is an Artist’s Edition as well so you get to see the beautiful artwork even bigger.  And it comes out the day before my birthday!  Any Spoilerites want to buy this for me?  Didn’t thinks so …” – Chris Bandette Vol 2 Stealers Keepers! HC
Writer: Paul Tobin
Artist: Coleen Coover
Publisher: Monkey Brain Comics
Price: $14.99
In Stores: April 25th, 2015
ORDER ON AMAZON
“Bandette is an amazing take on a young female vigilante! Paul Tobin nails the voice, Bandette is charming, witty and drops just enough French to make the Parisian setting feel authentic and Coleen Coover puts some of the most beautiful art in the business on the page. Bandette collections don’t come out often, so scoop them up when you can.” – Ashley Courtney Crumrin Vol 7: Tales of a Warlock
Writer: Ted Naifeh
Artists: Ted Naifeh and Warren Wuncinich
Publisher: Oni Press
Price: $24.99
In Stores: March 11th, 2015
ORDER ON AMAZON
“There’s something this series that is both cute and scary at the same time. If you like Harry Potter and the like, then you’ll get a kick out of the world Ted Naifeh has cooked up.  Definitely worth a read, but don’t be surprised if you are a little lost as this is volume seven and there is a lot that has come on before.” – Stephen

Which collected edition are you looking forward to getting your hands on this month? If you need a little help you can find a list of all the collected editions being published April, 2015 right here.