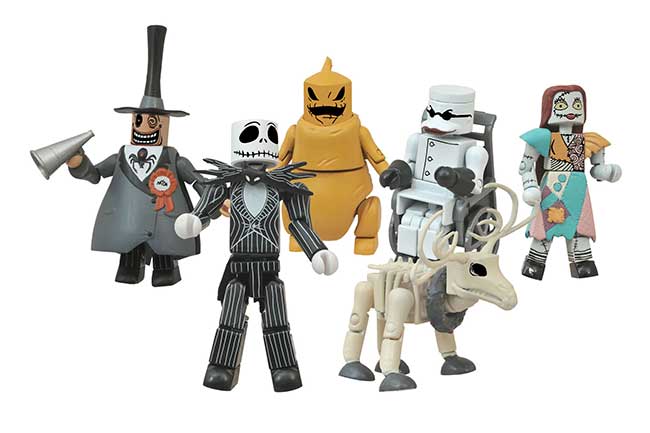 It’s time for a new batch of toys and collectibles from Diamond Select Toys! As seen in this month’s Previews catalog, the following new items are now available for pre-order from your local comic shop or specialty store, as well as your favorite online retailer. Read on for new items from Ant-Man, Batman, Clerks, Ghostbusters, Hack/Slash, Jay and Silent Bob Strike Back, Marvel, My Little Pony, Nightmare Before Christmas and Predator! It’s our most diverse set of offerings yet! Find your nearest store at comicshoplocator.com and pre-order today!

Batman Classic TV Series Premier Collection Batgirl Resin Statue
A Diamond Select Toys release! The Batgirl of your dreams is now the centerpiece of your statue collection! The first full-size statue in our Batman Classic TV Series line, the Premier Collection edition of Batgirl depicts actress Yvonne Craig as the unforgettable sidekick to Batman and Robin, the way she appeared in the third season of the classic TV show. Sculpted by the legendary Clayburn Moore in her distinctive purple-and-yellow crimefighting costume, this resin statue of TV’s Barbara Gordon stands approximately 12 inches tall atop a Bat-logo base. Packaged in a full-color box with a certificate of authenticity. Limited to only 1,966 pieces!
(Item # APR152297, SRP: $199.99) Batman The Animated Series Batman Resin Bust
A Diamond Select Toys release! Evildoers beware – Batman is kicking off the next big bust line from Diamond Select! Based on the iconic and revolutionary Batman: The Animated Series, this line of 6-inch resin busts will depict Batman and his friends and foes just as you remember them from the cartoons! The Caped Crusader himself will be the first release in the series, with his arms crossed atop an art-deco base inspired by the show’s distinctive style. Packaged in a full-color box with a certificate of authenticity. Limited to 3,000 pieces. Sculpted by Steve Varner Studios! (Item #APR152298, SRP: $59.99) Femme Fatales Hack/Slash Cassie Hack PVC Statue
A Diamond Select Toys release! Supernatural slashers beware! If you’re an undead monstrosity, or an seemingly unstoppable psychopath, you might just be Cassie Hack’s next victim. The star of the hit Image comic series Hack/Slash, Cassie is the newest 9-inch PVC statue in the Femme Fatales statue line from Diamond Select. Walking along an axe head, Cassie holds her partner’s mask in one hand, and a bat with nails in it in the other. Sculpted by Sam Greenwell, based on a design by creator Tim Seeley! Packaged in a full-color window box. (Item #APR152308, SRP: $45.00)

Ghostbusters Slimer Pizza Cutter
A Diamond Select Toys release! Pizza need cutting? Who you gonna call? How about the Ghostbusters’ resident foodie, Slimer? As a focused, non-terminal repeating phantasm, Slimer tends to eat his food by the handful, with no cutting required, but the overall shape of this Class 5 full roaming vapor is perfect for housing a pizza wheel! A three-dimensional sculpt of Slimer stuffing his face with a whole pizza acts as the handle for a palm-sized blade, perfect for carving out a New York slice. Blade is easily removable for cleaning. Packaged in a full-color window box. (Item #APR152304, SRP: $14.99) Jay & Silent Bob Strike Back Bluntman and Chronic Tumbler Set
A Diamond Select Toys release! Another innovative product from the world of Kevin Smith! In the film “Jay and Silent Bob Strike Back,” the release of “Bluntman and Chronic” on the big screen was an important pop-culture event, but did you know the Mooby’s fast food chain released a pair of commemorative drinking glasses to mark the occasion? Well, they did, and now those glasses are available outside the View Askewniverse for the first time ever! Own a piece of film-within-a-film history as DST expands their Reelware line of meta movie merchandise! Packaged in a full-color window box.
Bluntman Glass (Item #APR152302, SRP: $9.99)
Chronic Glass (Item #APR152303, SRP: $9.99) Marvel Hulk Plastic Gelatin Mold
A Diamond Select Toys release! There ain’t no party like a Hulk party, because a Hulk party cannot be stopped! By anyone! Not even Thor! Make your next get-together unstoppable with this plastic gelatin mold in the shape of the gamma-irradiated Avenger’s face. Measuring approximately 8 inches tall, this mold works with any color gelatin, not just red and green, and comes packaged in a full-color window box. (Item #APR152306, SRP: $14.99) My Little Pony Rainbow Dash Vinyl Bank
A Diamond Select Toys release! Equestria’s greatest flyer is now the greatest bank ever! This dynamic 7-inch sculpture of the speedy pegasus Rainbow Dash, as she appears in My Little Pony: Friendship is Magic, may look like a high-end statue, but it’s actually a vinyl bank! With a coin slot in the back of her cloud, and an access door in the base, you can set her up on a high shelf, and watch your savings soar into the stratosphere! (Item #APR152305, SRP: $22.99) Nightmare Before Christmas Jack Skellington 16″ Coffin Doll
A Diamond Select Toys release! Halloween is coming, and so is Jack Skellington! The star of Tim Burton’s stop-motion masterpiece, The Nightmare Before Christmas, this 16-inch tall doll of Jack is a must for any home that embraces the spirit of Halloween. With a fully articulated body and a real cloth costume, this exacting re-creation of the classic Jack figure will rest comfortably in his coffin-shaped window box until the times comes for him to rise once again! Limited to 1994 pieces! (Item #APR152291, SRP: $49.99)

Nightmare Before Christmas Select Action Figures Series 1 Asst.
A Diamond Select Toys release! Tim Burton’s The Nightmare Before Christmas is finally getting the Select action figure treatment! The Select line is known for its detailed sculpts, larger scale and its diorama bases, and NBX promises to put all of those features to the test! Jack Skellington, Sally and Oogie Boogie will make up the first series of figures, each sculpted to a 7-inch scale with character-appropriate articulation. Jack Skellington will come with a cemetery environment, Sally with a Halloweentown environment and alternate kneeling legs, and Oogie will come with a stone floor base and a removable face! Each figure will come packaged in the Select-style display packaging, with spine artwork. Sculpted by Dave Cortes! (Item #APR152296, SRP: $149.94/case)
Jack Skellington Figure (Item #APR152293, SRP: $24.99)
Sally Figure (Item #APR152294, SRP: $24.99)
Oogie Boogie Figure (Item #APR152295, SRP: $24.99) Nightmare Before Christmas Minimates Foil Bag Asst.
A Diamond Select Toys release! Christmas is coming early this year! Each foil-bagged mini-figure in our display of Nightmare Before Christmas Minimates is like a little present to open, and there are eight different figures you can get! The first series includes Jack Skellington, Sally, Oogie Boogie, The Mayor, Dr. Finkelstein, and three exclusive figures – a Skeleton Reindeer, a glow-in-the-dark Jack, and a rare, one-per-case glow-in-the-dark Sally! With 18 packs to a display, there’s a full set in every one! (Item #APR152292, SRP: $5.99/ea.) Predator Unmasked Vinyl Bust Bank
A Diamond Select Toys release! DST goes deeper into the jungle with this vinyl bust bank of an unmasked Predator! With his mandibles out and his shoulder cannon at the ready, this hunter is protective of his prize, and his prize is your loose change! Insert coins through a slot in the back and remove them through an access door in the base. With a detailed, collectible-quality sculpt by Eli Livingston, you’ll take one look at this bank and you’ll say, “You are one ugly money-saver!” Packaged in a clear polybag. (Item #APR152309, SRP: $22.99)