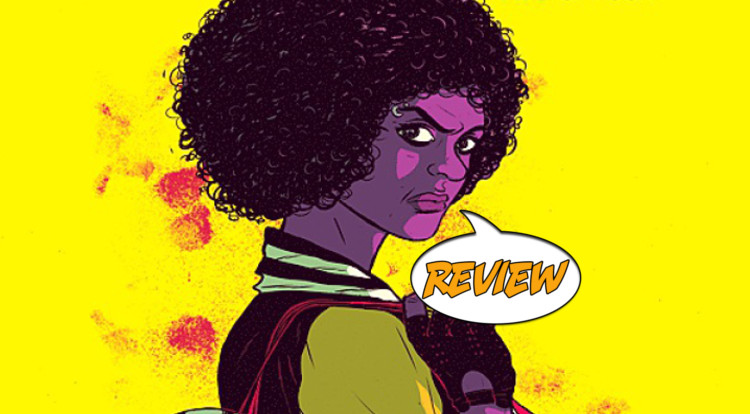 Curb Stomp #2 is told from Violet’s perspective as the attack on the members of Fever goes from fellow gangs to all of Old Beach and beyond. Previously in Curb Stomp #1: The Fever pissed off another gang and Derby Girl was kidnapped as a result.

Ryan Ferrier is great at stakes and he raises them steadily throughout Curb Stomp #2. Where the previous issue was told from Machete Betty’s perspective, this narrative is all about Violet and she is one tough cookie. Everything that happens she takes even more personally than Betty did and by the end of the issue Ferrier has her spring into violent over-reaction that goes nothing but poorly for her fellow Fever girls.

Violet and Daisy take the kidnapping of Derby girl to heart and they immediately begin plotting an act of revenge without Betty or Rose. Curb Stomp #2 shows just how young the protagonists of this series really are. They play at being tough, but they are in no way ready to be in charge. Ferrier proves to readers that there are many characters in Old Beach who have nothing but the girls’ best interests at heart … even if they are incapable of seeing beyond the end of their own noses. At one point Violet even shouts a character down who warns her against acting rashly.

By the time Ferrier wraps up Curb Stomp #2 Violet and Daisy have acted recklessly and added to the body count the Fever have incurred. It is an incredibly frustrating reading experience when two young women not even out of their teenaged years enact revenge in the most lethal manner they can imagine rather than doing anything that may actively bring Derby Girl back to them – or at least in a position of safety.

To Ferrier’s credit, he nails the impulsive behaviour of teenaged girls down to their abrasive language and poor judgement. Curb Stomp #2 rings out with colloquialisms and profanities that feel true-to-life and surprising for a BOOM! Studios title all at the same time.

In Curb Stomp #2’s b-plot readers get a peek at the rival-turned-allied gangs that have taken Derby Girl by way of revenge. The plot to take down Old Beach’s lady gang reaches all the way to the politicians of the county, the result of which is a call to action on county television to stop these young women at any cost.

Readers get a brief glimpse of Derby Girl – enough to know that she is still alive, which is more than the Fever know – wherein Ferrier not so delicately reveals that she is a serious junky. This character trait implicitly makes her a part of the drug war problem that has caused the necessity of gang culture to become as pervasive as it is by Curb Stomp #2. In her defence, Derby Girl is not the only betrayer of the Fever. Bloody Mary straight up turns coat on her fellow females in a move that is certain to ring out her comeuppance in coming issues.

Curb Stomp #2 is rough around the edges in a way that feels true to the characters and leaves the leading ladies backed into a proverbial corner by the end of it.

Devaki Neogi is on art duties for Curb Stomp #2 and his linework matches the narrative being told. It is rough and tumble and there is not beautiful person in sight. Neogi’s work on the Fever leaves them looking older than their 18 or 19 years, Violet wears the years and her economic struggle on her face. She and the Fever girls are also very, very solid – each and every one of them look like they could wreak the havoc that they have to date in the series.

Old Beach is similarly rendered by Neogi in Curb Stomp #2. The burrough is small and tough and has tried to drag itself out of the dirt although it’s not quite there yet. The city bears as much characters as those who populate it and the attention to detail in Neogi’s design work truly breathes life into the issue.

Additionally, Jeremy Lawson provides the colour work for Curb Stomp #2 and they are bright and awesome. They add a very pleasing aesthetic quality to the issue that lands it squarely in the non-period specific area of storytelling. Lawson brings something truly special to this issue that elevates it above a lot of other work being published right now.

Curb Stomp #2 is a solid read if you’re looking for tough girls, violence, swears and just a touch of nostalgia.

Curb Stomp #2 sees the Fever taking extreme action in retaliation for Derby Girl's kidnapping and it goes south from there. Plus, the colouring is awesome!