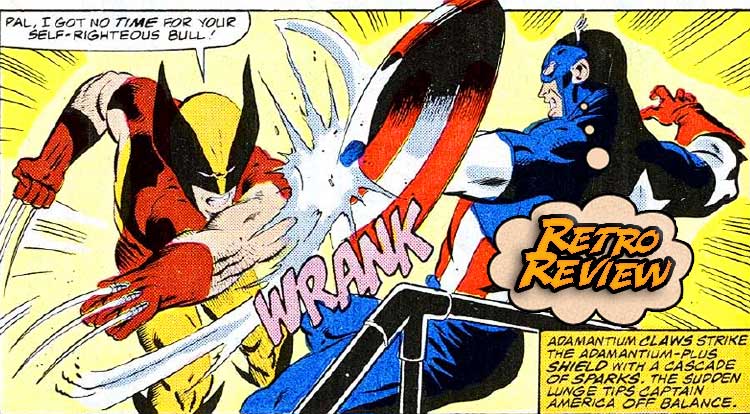 Sometimes, you meet people who just rub you the wrong way…  For Captain America circa 1986, that man was the diminutive X-Man known as Wolverine.  Can they set aside their differences long enough to prevent catastrophe?  Your Major Spoilers (Retro) Review of Captain America Annual #8 awaits! Previously in Captain America:  The original reasons for comic book annuals were to pry a few extra nickels out of the hands of sweaty children during the summer, but by the mid-80s, annuals had become “event” books.  Crossover like ‘The Evolutionary War’ and ‘Atlantis Attacks’ became the norm, and both Marvel and DC devoted a summer to introducing new characters with each new annual revealed (none of whom really stuck, with the possible exception of Garth Ennis’ Hitman.)  This particular story, though, is an event of a slightly more personal nature, beginning in a dive bar in upstate New York, where the man called Logan pointedly (and against type) doesn’t get involved in a barroom brawl… The name Bob Frank should sound familiar, as he is the son of Bob Frank, Sr. and Madelyne Joyce, aka The Whizzer and Miss America of Liberty Legion and the All-Winner’s Squad.  Thanks to his parents being Golden Age superheroes, Bob is indeed a mutant, and once fought the Avengers as Nuklo, getting summarily trounced by The Scarlet Witch (who, it should be noted, believed herself to be his sibling at the time.)  Of course, that’s nothing compared to the beating Bob gets in this issue at the hands of particularly vengeful giant robot… Wolverine leaps into action, slashing away at the monster to save Bob from a possibly lethal beating, but even his experience with giant flying robots that lay the smack down on mutants doesn’t prepare him for rocket boots! Again, since Sentinels can fly, you’d think he might have seen that one coming, but Wolverine isn’t yet the strategic genius that we expect him to be in a modern comic book appearance.  Rather than the patient, immortal soldier, this Wolverine is a headstrong, impatient jerk.  Wolverine lands safely, and rushes Bob Frank to the hospital while, not far away, the actual star of this title follows up on a mysterious sinkhole that appeared in a peculiar small town. Captain America finds that this particular underground complex is more than just a bomb shelter, as it is rigged with poison gas, doors that automatically lock, and… What was it?  Oh, yes!  A floor that collapses into a pit of razor-sharp steel spikes for maximum deathitude! Making his way to the center of the chamber, Captain America finds evidence of the giant robot we’ve just seen, somehow kept in storage for many years.  But what brought it out of storage and back into the business of violence?  Glad you asked, Faithful Spoilerites! I have long enjoyed the art of Mike Zeck, but his work is best with a strong inker who can mute some of the more angular and bizarre parts of his anatomy, and John Beatty really doesn’t get that job done here.  Still, even that slight mismatch doesn’t completely drain the joy out of the art in this issue, especially the cool retro design of the killer robot, an automaton that we discover has something of a mind of her own… Captain America’s network of reg’lar fellers (The Stars And Stripes Network, set up to help him better find and fight crime) points him in the direction of upstate New York, where his pursuit of the robot intersects Wolverine’s score-settling.  Since they’re both superheroes and it is the 1980s, their meeting is less collaboration than it is collision. Okay, nerds!  That answers that question!  Please tell all your friends about Captain America Annual #8, page 23, for their “claws-versus-shield” answers!  Join us next time around as Green Lantern falls off a du–

Wait, what?  You want to hear the rest of this story?  Okay, okay…  Tracking Overrider and the robot to this foundry is no mere coincidence, as it is the only facility in the area that works with the indestructible alloy known as adamantium, and now the robot is coated with a layer of impenetrable metal… which is bad. Overrider barely manages to rein in the robot, who has a clear hatred of Captain America, but once he does, he takes it on the run, leaving the heroes to make an uneasy alliance…

That first panel is an example of a Zeck face gone horribly awry, one of more than a few in this issue, but it’s nice to see someone remember that Captain America is supposed to be a full 14 inches taller than Logan.  Logan sets off to do whatever it is he does during the day, while Captain America hits the Library of Congress to follow up on his leads.  What he discovers makes the robot’s fixation on him make perfect sense… This is a fascinating bit of backstory, and one made a bit funnier in hindsight, especially given the revelation that Wolverine was an attempt to recreate Captain America by the Weapon Plus program.  (Assuming, of course, that anything Grant Morrison wrote in ‘New X-Men’ is still in continuity, which may not be true.)  Either way, Overrider is caught by one of Captain America’s informers, and the heroes trail him to Colorado, to the NORAD facility, where he sets TESS-One loose on the sentries.  Fortunately, Cap and Wolverine arrive to confront the robot and his mysterious commander… Working together (or, to be accurate, Captain America carefully working in concert with Wolverine’s uncontrollable lone wolf tendencies), the heroes bring TESS down, and realize that the weak point has to be in its joints, allowing Wolverine to take the kill shot without being stopped, for once. Rushing into the facility, they arrive in time for Overrider to give his villain spiel, explaining that he’s working to save his son, a boy who is catatonic due to a fear of nuclear annihilation, proving that this comic book really did come out in the 1980s.  Captain America uses Overrider’s distraction against him, only for Wolverine to once again play the wild card… Heh…  That last panel always cracks me up.  Still, Captain America was right for about 20 years or so, so you have to give him credit for that much, at least.  The issue ends with Logan checking in on Nuklo in the hospital, reminding us that he’s a good guy under his prickly facade after all, a scene that seems designed specifically to offset his near-murderous moment here.  It wouldn’t be more than a few years worth of comics before the hero that killed was not just the norm, but seemingly preferred, making such moments moot.  Still, Captain America Annual #8 is an interesting study in contrasts, putting the traditional square-jawed good guy head-to-head with his anti-hero counterpart a few years before it became the center of nearly every story, and looking okay even though penciller and inker didn’t always seem to mesh quite right, earning 3 out of 5 stars overall.  It’s stand-alone but meaningful adventure still stands among the best one-shot annual tales even thirty years down the line…