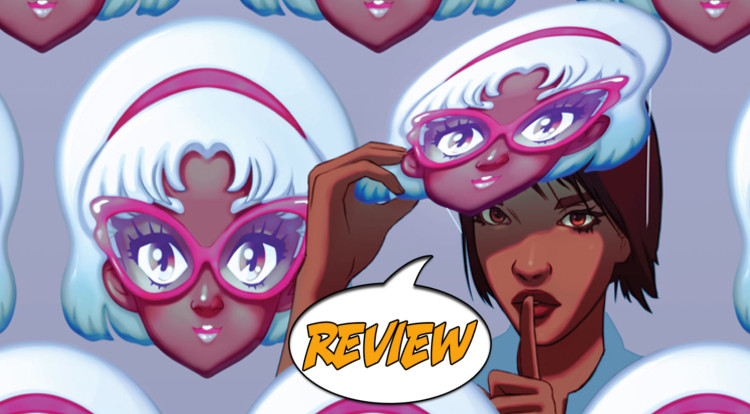 Chondra goes undercover at a convention in Effigy #3 and the secret organization reveal a little bit more about their methods. Previously in Effigy #2: Chondra met with the first suspect in the murder case and it’s a familiar face from her past.

In Effigy #3 writer Tim Seeley puts fans and conventions under the microscope as Chondra and Detective Moore’s investigation takes them away from Effigy Mound and out into the world. They are also accompanied by Edie, although it doesn’t seem that she has much to offer that is actually helpful in either forwarding the investigation or uncovering the greater mystery that Seeley is unfolding.

Seeley has been revealing more and more about protagonist Chondra Jackson’s previous life and career in Hollywood and the detail that he drops in Effigy #3 is the most risqué to date. Rather than serving to defame Chondra and her character it serves to strengthen Detective Moore’s character, while at the same time perhaps laying down the potential for their relationship to change.

Chrondra and Detective Moore go undercover at Copcon – a convention celebrating the Star Cops television show that Chondra used to star in – with Edie as their less than helpful spirit guide, in order to stir up some information about the deceased from the first issue. The setting of Effigy #3 forces Chrondra to go deeper undercover so as not to be recognized. The gimmick is cute, although it doesn’t last consistently from panel to panel.

Seeley has his b-plot at its most prominent in Effigy #3. The organization of questionable means and manner has an agent out in pursuit of Chondra and Detective Moore as their murder investigation brings them closer to discovering just how cosmic the Star Cop influence really is. Toward the end of the issue Seeley also wraps up the storyline of the super fan seeking nirvana and it doesn’t go as well as this character may have hoped when readers first met him.

Effigy #3 presents an interesting perspective on the influence of popular culture as it transfers into fan culture and the dark, far reaching effects that it can have. Chondra Jackson is slowly coming to grasp with the sphere of influence she has had – even when compared to some of her former co-stars that are still involved in the entertainment industry.

As Seeley reveals more and more of the scale Effigy #3 is functioning on the issue really takes on a dark tone.

Marley Zarcone takes on the art duties in Effigy #3 and she does absolutely beautiful work. Her linework is very clean and sets the series apart as highly, highly polished. Even the messiest most out-of-control characters (like Edie), as rendered so thoughtfully that the result is nothings short of lovely.

Effigy #3 gives off the feeling of being very safe and very clean, putting the art at odds, inherently, with the increasingly dark and dangerous mystery that Seeley is unfolding in the story. The dichotomy is very compelling and often serves to lull readers into a false sense of security until confronted with the sometimes graphic nature of the narrative.

This issue opens with Detective Moore in a morgue speaking with the coroner and, even then, Zarcone presents an absolutely stunning rendering of the characters and situation. It’s disarming and well-executed at the same time and leaves readers with the sensation that everything going on in Effigy #3 is designed to off-put.

Effigy #3 is a building block toward unravelling the greater mystery of the series. This is a solid issue that’s great to look at, but definitely requires knowledge of the two issues that came previous.

Effigy #3 expands the world, visits a convention and renders some scary situations in lovely art.