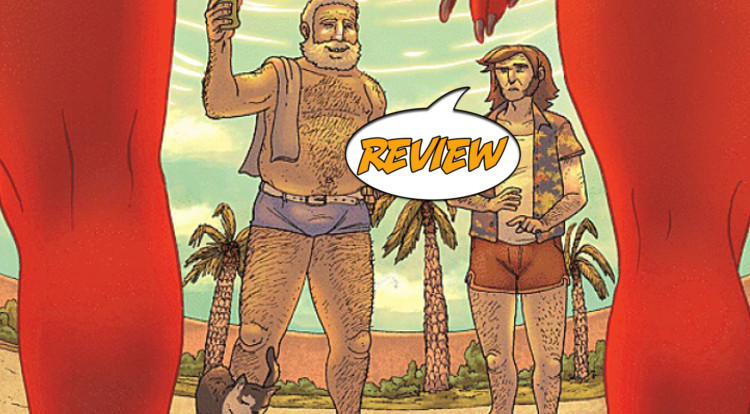 The Life After #8 Review

The Life After #8 has a revelation for Ernest and Jude with a special cameo appearance by some ladies at the end of the issue. Previously in The Life After #7: Everyone went to Hell and there were a lot of little children.

The Life After #8 takes the characters to a brand new, much more nefarious setting. Joshua Hale Fialkov has set the previous issues in a very corporate version of purgatory and to have Jude and Ernest Hemmingway suddenly thrust into eternal damnation raises the stakes of the drama quite nicely.

In the Life After #8 Fialkov allows his incarnation of Ernest Hemmingway a moment of weakness for the first time. Hemmingway has been the stalwart leader, navigating Jude’s passage through his waking life (waking death?), and it is interesting to watch this rock of a character give into the vice of lust after eight issues.

To Jude’s credit, he breaks with Hemmingway with very much grace. He’s grown up enough in these past issues to walk this new path on his own. Granted, the Life After #8 doesn’t prove Jude to be an infallible judge of character or strategy, but he is able to deal with the obstacles Fialkov have thrown at him in a fashion that should have been impossible if this were the Jude from the debut issue.

Jude’s deal with a devil – literally – does wind up necessitating the return of Ernest Hemmingway to the role of saviour in the Life After #8 and Fialkov executes this with much hilarity. Who would have expected when the legendary author was introduced in the first issue that he would turn out to be such an action star? The Life After #8 deals with a lot of serious subject matter that is expertly balanced out by moments of wry humour and Hemmingway is most often the vehicle for snappy one liners.

With the sincere matters addressed in each panel, the unexpected jokes the final ingredient in the Life After #8 is an emotional beat and Fialkov has a perfect one to end of the issue. Nettie and Essie have been exploring their new relationship since being reunited as mother and daughter in an earlier issue and that’s really made for some compelling b-plot material. On the final two pages they and the army of children arrive like an avenging force in the bowls of Hell with a nice aesthetic shift that hints toward the growing bond between Nettie and Essie.

The Life After #8 is funny, it showcases a lot of growth from the protagonist and Fialkov caps it off with such an interesting introduction to a scene that readers are left wanting the next issue to be on the racks at this very moment.

Gabo is the absolutely perfect artist for the Life After #8. His loose linework really lends itself to the increasing cast of supernatural characters that come into the book. This issue in particular features demons, tiny manifestations of rabbit gods (yeah, it’s that awesome), a devil, Zelda and Scott Fitzgerald and demon Hell beasts – leaving the army of tiny children aside for just a moment – and they are all rendered with careful design details that makes each additional character more fun to look at than the last.

The Life After #8 has Gabo presenting Hell as very much like suburban America and the more of it readers see the more colourful and geometrically perfect it becomes. When toward the end of the issue it comes under attack by the aforementioned avenging army Gabo draws scenes on a great scale, he really takes the opportunity to show just how much of a story he can tell over the course of a single page. The result is quite stunning, really.

It’s a good looking, unique book that showcases a lot of cool characters and character types readers aren’t likely to see other places.

The Life After #8 is my favourite issue of the book to date, there is a lot of growth to be seen across the cast and the creative team are firing on all cylinders.

The Life After #8 sees Jude on his own for the first time in a while along with the heroic return of Nettie and Essie is a great, great issue.