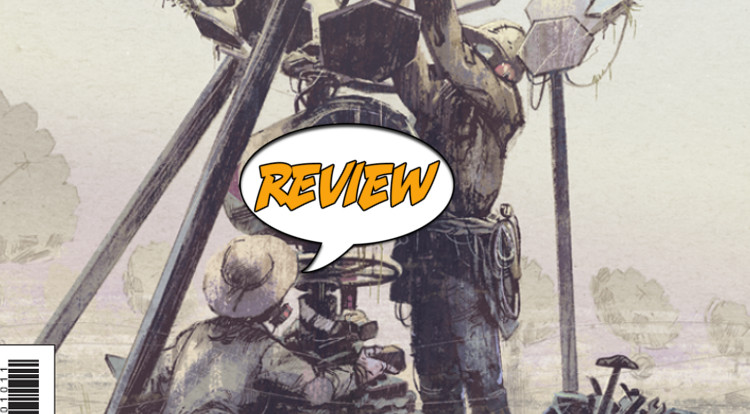 Previously in the Bunker #10: Grady and Billy from different timelines team up and it doesn’t go so well.

Joshua Hale Fialkov has introduced a new storyline in the Bunker #10 and it makes for a most compelling issue. The story focuses on two new characters – Damion and Carly – and the totally different world they live in. These characters exist in the future timeline post food-and-weather crisis in Oklahoma. Fialkov cleverly recalls the events of the dustbowl by casting these characters as farmers and setting the events of this issue in Oklahoma.

Carly and Damion are barely making ends meet when readers meet them in the Bunker #10, both suffer from dust inhalation and respiratory problems, which fractures their ability to farm and work out of doors. The Bunker #10 gives readers a peek at what life is like for ordinary citizens who lived under Grady’s presidency and suffered the food shortages. Fialkov imbues the story with a sense of detachment between the citizens and their leader that one would hope would develop in a national emergency.

This theme of detachment evolves into a theme of betrayal by the end of the Bunker #10. Carly and Damion suffer from rationing at the hands of a government supplier that dramatically alters their ability to be productive and their story seems to be very dark indeed. The betrayal aspect becomes clear two-fold in Fialkov’s narrative.

Throughout the Bunker #10, in spite of all their struggles, Damion and Carly love each other and they are dedicated to their life together. It’s a touching plot point that never once feels forced or false. The initial betrayal comes when President Grady – the only character readers are familiar with from the previous issues – gives a national address that is more of an appeal to farmers than anything else. He is offering them a way out of the crop shortages – of all their suffering – if they simply plant the ASPIRE plants that were developed by Daniel Adamson (a name series readers will be familiar with). Before the Bunker #10 ends there are already rumblings that ASPIRE is not all it promised to be and, to raise the stakes, Damion went ahead and signed up to be a pilot farm without Carly’s blessing.

The drama that Fialkov has penned in the Bunker #10 is so quiet and so personal to these two new characters that it really hits home in a powerful way. He has distilled the overarching narrative of his series down to the struggles of two people in a way that all readers can quantify and have pathos for. It’s lovely and it is my sincere hope that we get to see more of Carly and Damion in the series moving forward.

Brahm Revel takes over the art duties for the Bunker #10 and he does outstanding work. This is a beautiful issue with great colours placed on top by Jason Fischer. Revel has executed a great dichotomy in the character design of both Carly and Damion. Damion is big and hulking whereas Carly is small and slight. The striking difference in frame between the two characters back up Fialkov’s dialoge where it is made clear that Carly has some health problems.

With Damion as big as he is yet unable to provide food, work, protection or healthcare for either himself or Carly it makes sense that he would be willing to go to drastic measures in order to create hope for their future. Brahm draws Damion and Carly against the stark, alien backgrounds of their farm through most of the Bunker #10. Despite the fact that the story is set in our near future Brahm may as well be drawing the surface of Mars because it is so barren.

The Bunker #10 looks great, Brahm keys readers into a lot of character and plot points simply in his linework and the result is lovely and stark.

The Bunker #10 doesn’t require any prior knowledge, it’s a compelling story about two people trying to survive in a scary place and it leaves a strong impact on the reader afterward. You should pick this up.

The Bunker #10 introduces new characters and a more personal story than we've seen in the series to date all rendered by a new artist.