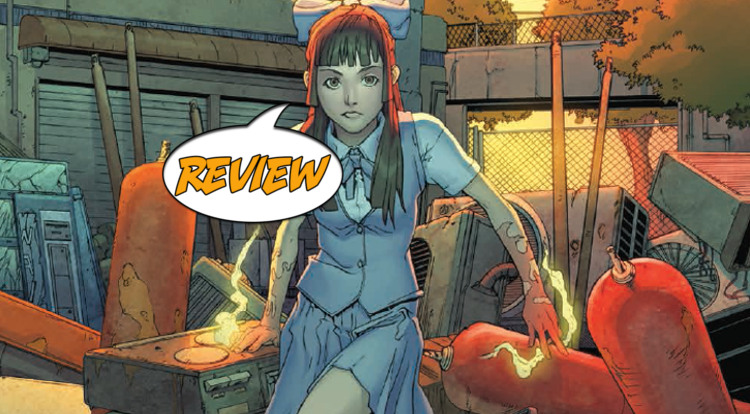 Wayward #6 introduces Ohara Emi and her ordinary life as it is about to be turned on its head by some familiar faces.

Wayward #6 is the beginning of a new story arc and Jim Zub has kicked it off right. The issue introduces readers to a new Japanese school girl named Ohara Emi. She lives the life that an outsider would expect, she has a routine, she is the perfect daughter and nothing about her life strays out of line. It is safe, but it is empty and Ohara is left to live vicariously through her fantasies until aspects of those worlds creep into her own routine.

Ohara loves manga. Zub uses his manga-inspired story, Wayward #6, to highlight the affinity that girls of a certain age have for the medium. Ohara connect so fiercely with these beautiful girls wrapped up in adventurous love stories that when she overhears gossip about what has become of Rori – the protagonist during the first arc of Wayward – she quantifies the drama as it would have played out in one of her stories.

Zub upsets the routine that governs Ohara’s life in the pages of Wayward #6 by focusing in on an obscure detail. Twice a week she purchases a small plastic toy shaped like an animal because they are sweet, small, perfect and contained – a mirror image of her own life. When Ohara begins connecting with Rori and some of the series more mystical elements she confronts animal spirits. The kitsune (foxfire spirits), that were introduced in the previous issue), hunt down Ohara as she pursues Rori’s astral projection through the streets of Tokyo.

It’s a subtle move on Zub’s behalf to keep the animal imagery running strong throughout Wayward #6 in particular because spirits and animal-based spirits are so rampant in ancient Japanese mythology. Readers of the series are familiar with the cat daughter character Ayane and she appears before Ohara in her violent, animalistic glory in order to save the day and wrap up the business of the kitsune all in one fell swoop of a bat with spikes on the end. In traditional Japanese stories foxes are dangerous deceivers and cats are lucky … just as in the pages of Wayward #6.

Readers are also rewarded with a brief peek at Nikaido, a character introduced – though shrouded in mystery – in the previous issue. There are very strong implications that Rori is nearby and Ohara Emi is about to be dragged into her crusade through the magical underground community of Tokyo, but Wayward #6 leaves off with the introduction and the promise of greater adventure to come.

Once again, Jim Zub has nailed the adolescent female voices of his protagonist in Wayward #6. Ohara is every bit as likeable in her introduction as Rori was in hers, although a different person at her very core. I’m very much looking forward to seeing the two character meet and what sort of mystic mayhem awaits them.

Steve Cummings is such the perfect artist for Wayward #6. He puts beautiful lines on the page that indulge the manga-influence of Zub’s narrative with an easy and grace, the result of which has been consistently stunning.

Wayward #6, in particular, is a treat for readers of the series. We get to see the world, characters and magical elements we are familiar with, but through a fresh pair of eyes. Whereas Rori was the beautiful fighting girl (down to her unique hair colour), Ohara is the ingénue almost floundering in her naïveté. Her appearance takes cues from many characters across Japanese visual storytelling, but that in no way makes her boring.

Wayward #6 is pretty, it’s clever and readers are offered a new protagonist to entered the story with. If Japanese story themes and urban fantasy appeal to you this is a great comic book to jump into.

Wayward #6 takes all the elements from Ohara's fantasy world and presents her with the danger of them in a great jumping on point to this series.