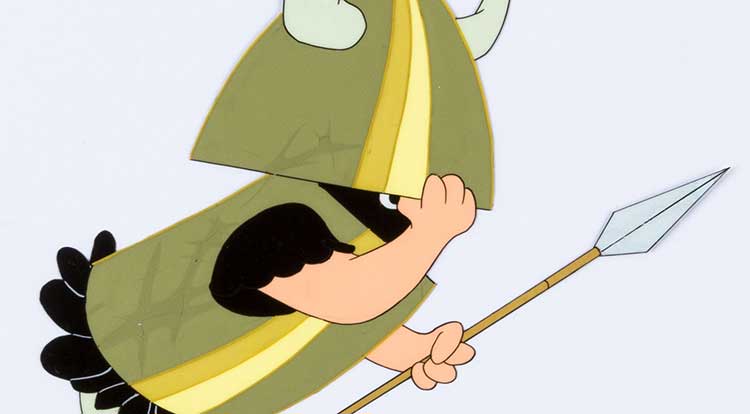 A virtual Who’s Who of 20th Century Pop Culture tops Heritage Auctions’ April 9-10, 2015 Animation Art Signature® Auction, led by a screen-used production cel from Snow White and the Seven Dwarfs, on a Key Master Production Background Setup – Disney’s game-changing 1937 animated film – featuring the Evil Queen just as she has transformed into the Old Hag, a key scene in the story. It carries a $40,000+ pre-auction estimate. “The great animators were actors with pens and pencils, each frame fully invested with their talent,” said Jim Lentz, Director of Animation Art at Heritage Auctions, “and no one did it better than Disney. The Evil Queen is, to this day, one of the great villains of cinema, and she was at her terrifying best when she became the Old Hag and set off the destroy Snow White.”

If it can be argued that any group of people bore more influence on cultural tastes in the 20th century than Walt Disney and his crew, that argument could be made on behalf of The Beatles, the greatest rock band of all time and stars of one of the most beloved animated films of all time, Yellow Submarine (United Artists, 1968). Featured in the auction is a Yellow Submarine Color Model from the film, a truly wonderful piece of animation history, as it’s one of the very first cels of the Yellow Submarine ever painted. It is estimated to bring $10,000+.

Not to be overlooked in what may well be the most important grouping of the auction are two incredibly rare animation cels from what is generally regarded as the greatest cartoon of all time, What’s Opera, Doc? (Warner Brothers, 1957): One cel features Elmer Fudd as Siegfried and Bugs Bunny as Brünnhilde in their dance sequence from the short and the other features just Elmer Fudd with his “spear and magic helmet!” Both cels carry pre-auction estimates of $5,000+.

“I cannot stress enough how rare any artwork from What’s Opera, Doc? is, let alone two cels from the cartoon,” said Lentz. “These are historic pieces of the first cartoon recognized by the Library of Congress and selected for preservation in the National Film Registry, directed by the great Chuck Jones. Most of the art to this cartoon was trashed half a century ago, but these pieces, among the few, have survived. It just doesn’t get any better.” Eyvind Earle Sleeping Beauty Concept/Color Key Painting (Walt Disney, 1959): Sleeping Beauty has pricked her finger and fallen fast asleep in her room in this exquisite concept painting from one of the greatest Disney artists to ever work for The Mouse. This is a key scene, one of the most important in the movie, created as a magnificent gouache on board painting. Estimate: $20,000+.

Mary Blair Cinderella Coach Concept Painting (Walt Disney, 1950): From the hand of Mary Blair, this concept painting has it all: the castle, the full moon and the horse-drawn coach speeding off into the night. Blair paintings of Cinderella are coveted by collectors and this is one of the most dramatic coach scene images Heritage experts have encountered. Estimate: $10,000+.

Fantasia “The Sorcerer’s Apprentice” Yen Sid the Sorcerer Production Cel Courvoisier Setup (Walt Disney, 1940): In the feature movie Fantasia, the Sorcerer Yen Sid (“Disney” spelled backwards) was the catalyst for Mickey Mouse’s greatest moment on film. This magical and menacing hand-inked, hand-painted production cel is from the point where the Sorcerer has just taken his hat back after Mickey had abused its power. Placed over a hand-painted Courvoisier background. Estimate: $5,000+.