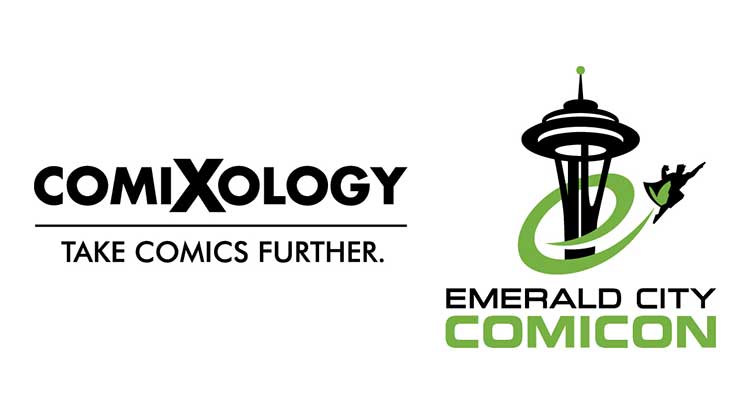 ComiXology, the revolutionary cloud-based digital comics platform, is coming to Emerald City Comicon with panels giveaways and a party where they’ll mix and mingle with motivated comics fans eager to learn about how to join the comiXology team! The Seattle based show runs from Friday, March 27th to Sunday, March 29th at the Washington State Convention Center.

“We can’t think of a better place to get the word out about our open positions than Emerald City Comicon in Seattle, the home town of our parent company, Amazon,“ said comiXology co-founder and CEO David Steinberger. “ComiXology is a company of incredibly smart people working every day to take comics further by having the best selection of comics, graphic novels and manga in the world. I’m looking forward to meeting future comiXologists at our events.”

With nearly 30 open positions in New York City and Seattle, comiXology is utilizing Emerald City Comicon as an opportunity to get the word out on their expansion. On Saturday night, comiXology will be hosting a party, open to the public with free drinks while supplies last and limited edition t-shirts available first come first serve. There attendees will be able to talk directly to comiXology’s CEO and co-founder David Steinberger, CTO Jeff DiBartolomeo, and other comiXologists who will be available to discuss positions at comiXology.

During ECCC, comiXology will be hosting a number of panels for comic fans and job seekers alike. On Friday, join comiXology and other great panelists at the Comics: Where to Begin? panel for personal recommendations to help you find comics you’ll love. For creators and cartoonists interested in digital self-publishing, the ComiXology Submit: The Future of Self-Publishing is a don’t-miss panel. Capping off the weekend on Sunday is the Hire Me! Panel, focused on pursuing jobs in the comics industry as a whole – not just comiXology.

At each panel, comiXology will be passing out limited edition t-shirts, free comics, and Kindle Fire tablets to lucky attendees of the panels.

Here’s a list of all the comiXology events at Emerald City Comicon this weekend:

With over 50,000 comics, graphic novels and manga from more than 75 publishers, comiXology offers the widest selection of digital comics in the world. ComiXology’s immense catalog and cinematic Guided View reading experience make it the best digital platform for comic and graphic novel fans worldwide.