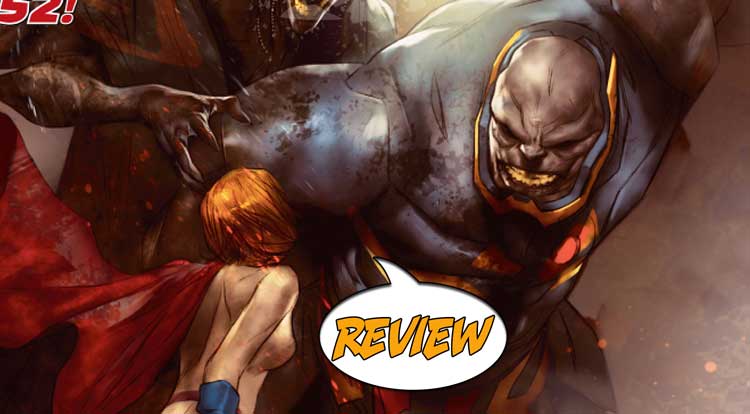 The fate of Earth-2 hangs in the balance as our heroes confront the man who nearly destroyed their world.  Your Major Spoilers review of Earth 2: World’s End #24 Review awaits! Previously in Earth 2: World’s End: Earth-2’s Superman, Batman and Wonder Woman all perished years ago when Apokalips attacked.  The planet has slowly rebuilt itself, and new heroes have emerged, including new Super and Bat-men, but it all seems for naught now that Darkseid himself has returned.  With their Earth being terraformed into something entirely new, the heroes have to ask whether they should even continue fighting an unbeatable foe…

ONE SHALL STAND, ONE SHALL FALL

Our story opens with a bang as Superman and Power Girl smash their way through the defenses of Apokalips in order to confront Darkseid himself, all the while fighting a clock as the terraforming of Earth-2 into another fire-pit-laden hellhole has already begun.  The non-super-powered heroes (The Flash, Hawkgirl, Aquawoman, as well as the retired Ted Grant and Dick Grayson) spend most of the issue flailing about as Mister Terrific leads an evacuation effort for THE WHOLE PLANET, leading to many scenes of characters yelling in crowds.  Most of the cast of Earth 2 puts in some sort of appearance, including a meaningful appearance near the end of the issue by a newly empowered Alan Scott, who may have a key to escaping destruction.  Also, Thomas “Batman” Wayne (who mysteriously survived the murder of his wife, unbeknownst to his son Bruce) has a few moments with his grand-daughter, The Huntress, before the real horror begins to unfold: There aren’t enough escape ships to house the entire population.

As much as I hate to say it, I couldn’t even get emotionally invested in this issue, for two reasons: First, I’m utterly tired of the literal end of the world, as it seems that this is now the go-to stakes for every action movie, comic book and television program.  Secondly, the destruction (or threatened destruction) of Earth-2 is just another example of the “What If World Don’t Count” theory, wherein alternate worlds are crushed into dust at the drop of a hat.  Witness the death of most of the heroes of Ultimate Marvel, the devastation of the New Universe in year two, or the ending of nearly any ‘Elseworlds’ storyline.  When death is cheap, the threat of death is meaningless, and the endless dark and gritty stories of the New 52 are wearing on me.  Much like ‘Worlds End’, a weekly series that likewise threatens Armageddon on a weekly basis, I just can’t care.  That said, there are some good moments in this issue, especially as a defiant Kara Zor-El lays into Darkseid roaring that *SHE* is the Superman of this world, a great moment for her as a hero (and one made even stronger by her wearing the s-shield over the traditional cleavage porthole.)  The art is something of a mixed bag, kit-bashed from four different artists, most of which feels scratchy and derivative of the Image Comics of the 1990s.

THE BOTTOM LINE: *SOO* TIRED OF THE END OF THE WORLD

A strong coloring/production job helps to smooth the moving parts of the different artists a bit, but the multi-writer issue is less well-handled, and Jay Garrick especially comes across as a whiny, petulant child during the story.  Earth 2: World’s End #24 is another example of a weekly series for the sake of a weekly series, with little in the way of consequence or meaningful stakes that leans far too hard on the threat of utter annihilation, with art and writing teams scattered enough to make for a mixed bag across the board creatively, earning 2 out of 5 stars overall.  While I hope that the Earth-2 characters survive past Convergence in some form, I’m not sure this is the one that I’d choose…