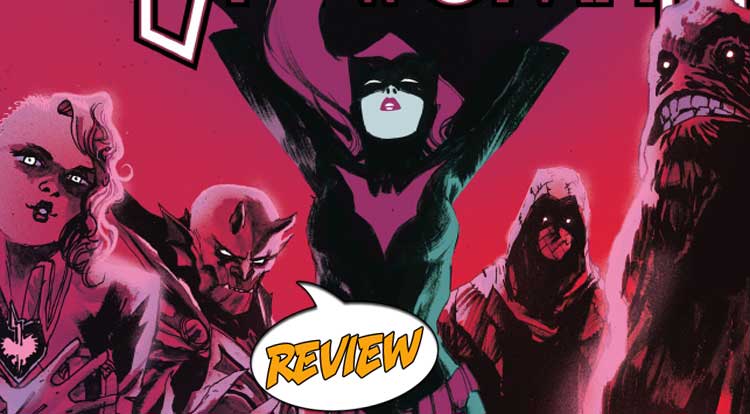 An unlikely crew called The Unknowns patrols the streets of Gotham City, the better to capture Morgaine Le Fey, but there is another problem to be solved…  A problem named Nocturna.  Your Major Spoilers review of Batwoman #40 awaits! Previously in Batwoman:  The medieval witch Morgaine Le Fey has come to Gotham City, and Batwoman has assembled an unusual group to oppose her: Morgaine’s old nemesis, Etrigan The Demon; the mysterious Ragman; Bat-villain Clayface; and most shocking of all, Batwoman’s mad twin sister, Alice.  Of course, their pursuit of Morgaine may be moot, as it seems that Batwoman has, in her vampiric form, murdered a young socialite in cold blood…

THE DEMON, THE RAGMAN AND CLAYFACE

As we open, Batwoman’s strange army combs the city  in search of the sorceress they all hate, but it becomes more and more difficult as Batwoman continually is distracted by memories of committing murder.  Kate leaves her friends behind in order to interrogate Natalia Mitternacht, who shows Batwoman evidence that she has become a murderous vampire.  Alice (or is she Red Alice now?  I’m not quite sure) arrives, and Natalia/Nocturna uses her powers to turn sister against sister again, with Batwoman ready to kill her sibling in cold blood.  There’s some really fun bits of Alice lunacy to be had here, especially her taunts of her sister regarding their combat gear, and finally Alice stops fighting.  Baring her neck, she practically dares her sister to murder her, to drink her blood and kill her dead…

…and Batwoman collapses to the floor, finally broken.  Nocturna gets a punch in the face, her real powers get revealed, and the Kane sisters have a lovely moment before a call from Ragman drags them back out on the hunt for Morgaine Le Fey in a cliffhanger ending…

WRAPPED UP WITH A BOW

…which is kind of odd, given that this is the final issue of Batwoman.  Of course, the Morgaine/Batwoman and The Unknowns portion of the story will be wrapped up in next month’s Batwoman Annual, just before the Convergence does whatever Convergence is gonna do to the DCU.  On the one hand, this issue doesn’t feel exactly rushed, but the way everything regarding Nocturna and vampire Batwoman is laid out for us feels a bit like the creators being forced to just tell us something that had wanted to build to.  Still, it’s good to see them getting a chance to do what they meant to do rather than end on an unfinished story, and I do like bits of this issue.  The art is nicely done by Jeanty (whom I know mostly from Dark Horse ‘Buffy’ comics), but I still miss the work of J.H. Williams.  Yes, I know that train has sailed…  As we fade to black, we are given the tantalizing thought that Batwoman and her pals will be fighting on the moon next issue, so I’ll be interested in getting a look at that story in a couple of weeks…

THE BOTTOM LINE: A LAST ISSUE THAT KIND OF ISN’T

This is a very odd last issue, in that it doesn’t feel in any way final, though it does provide closure for the Nocturna arc.  Batwoman’s adventures have been quite hit and miss in the New 52, with most people more aware of the creator changes and editorial decisions than in the story being told, but I do enjoy seeing Kate and Beth Kane working together in their bizarre way.  All in all, Batwoman #40 lives as the series itself ran, better than I might have expected (especially in terms of the complex story) but without audience acclaim, and hits a a solid 3 out of 5 stars in its final outing.  Still, I’m sad to see Kate Kane go and I’ll be watching to see what happens, if anything, with Batwoman in the newly realigned post-Convergence DC Universe…

One ongoing storyline gets tied up with a bow, but not all of them, as Batwoman's solo series comes to a close.