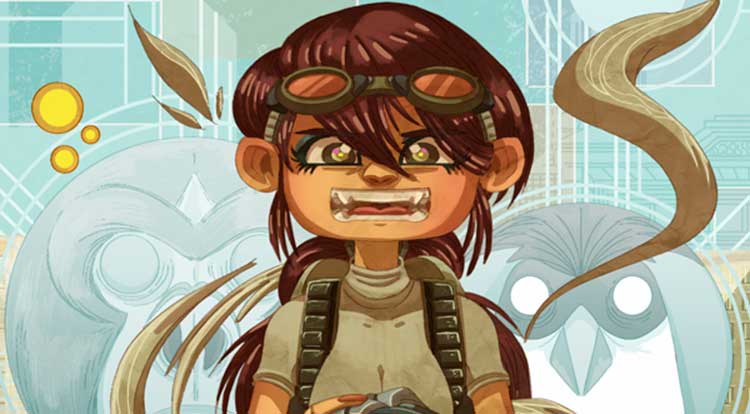 Jacqueline Mackenzie, the daughter of Foxbay’s preeminent hero, was coming into her own as a sidekick when her world was shattered. Now, racked with guilt, she must decide between the responsibility of protecting her city and a mother that no longer wants her to be a hero. Thankfully, she won’t face this dilemma alone… Variant Cover by Jose “Dex” Garcia! It’s off to school we go! Cassie calls on the Hero Cats to help with a curious college caper. Professor Tabart’s growth accelerating machine has been stolen and it’s up to the Hero Cats to catch the culprit
32 pgs./All Ages / FC $3.99 Creator Robert Tinnell returns to the world of his popular film, KIDS OF THE ROUND TABLE. Middle school student Kevin thought his vivid dreams of Merlin, Excalibur, and some of King Arthur’s most dangerous enemies were rough – but now those dreams have spilled over into reality – and brought the danger with them! Can Kevin protect his friends with the power of the magical sword Excalibur?
32 pgs./All Ages / FC $3.99 Adrienne and Bedelia are off to the swamp to rescue Adrienne’s sister Angoisse, but when a crash landing leaves them separated and stranded in a swamp full of dangerous creatures, Adrienne, Bedelia, and Sparky must face their fears just to find eachother. While Destiny has her hands full with Undead Dragons, Howliss goes missing! Vammette springs her master plan, leaving Destiny one step closer to doom. Will she ever make it back to Earth? Variant cover by Gayle Middleton herself (limited to 2000 copies!).
32 pgs./All Ages / FC $3.99/ $4.99 Variant Down-on-his-luck reporter Reggie Baxter has stumbled onto one of the greatest secrets of all time…superpowered high school history teacher Joe Campbell! But who is Joe Campbell and more importantly, how rich will Reggie become by blackmailing him? Two variant covers limited to 2,000 copies each!
Co-created by Jay Faerber (Copperhead, Dynamo Five, Noble Causes) and Jamal Igle (Molly
Danger, Supergirl, The Terminator: Enemy of my Enemy). After a lifetime of being manipulated by a succession of Masters, Andre Toulon’s Puppets may have finally found a way out. Is the psychic Madam Adon the savior they have been looking for? And if so, what is the price of freedom? The REBIRTH starts here!
Great jumping on point for new readers!
Variant Covers: Color, Sketch, & Photo cover of Jester limited to 1500 copies each

In an effort to make it to Miami faster, Zombie Tramp takes to the air this time on a one-way ticket to chaos. Can Janey control her temper and her human form on a 6-hour flight full of annoyances?
Maybe. But add one more unexpected element to the mix and you’ve got yourself one angry zombie on a plane.
Features a variant cover by series creator Dan Mendoza (limited to 2000 copies) and a risqué variant cover (limited to 2500 copies).

Zombie Tramp’s biggest showdown yet continues! But how will the zombie queen overcome swapping bodies – and powers – with the mystical Vampblade?!? Can the two gothic foes work together long enough to undo their body swap voodoo?? The back alley horror brawl is just getting started! Features a risqué variant, limited to 2000 copies!
32 pgs./ Mature Readers/ FC $3.99/ $4.99 Variant