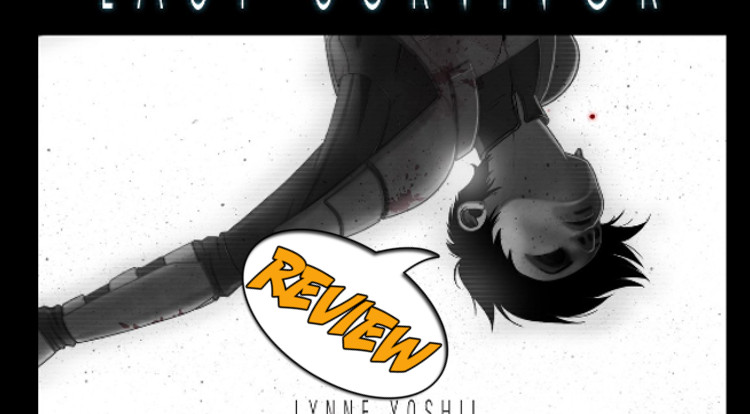 Last Survivor #1 is a pretty typical science fiction story with a cool little twist in the end. Last Survivor #1 hits most of the beats science fiction fans are familiar with. A human female is the last one left alive following an alien attack, but it’s not over yet, she’s still being hunted. Although the premise is not wholly original, it is an interesting enough one at the outset to keep reading. Unfortunately, writer Lynne Yoshii fails to name this protagonist, so readers are immediately lacking a connection.

The twist ending of Last Survivor #1 is the most compelling thing about Yoshii’s story and never quite pays off the earlier narrative. Throughout the issue we see the human female stalking the alien creature – that also goes nameless and species-less as far as readers are concerned – and the combat that the pair engage in. The whole while readers are rooting for the human female until Yoshii kills her in the final panels and the revelation comes that the titular character in Last Survivor #1 was not the human, but the alien the entire time.

Yes, it is certainly a compelling plot twist, however, Yoshii provides such little information about the situation as whole going into Last Survivor #1 that it fails to have the emotional impact one believes she is going for. Beyond survival and readers obvious inclination to empathize with a character of their own species there are no stakes behind these different species being in combat. Are the enemies? Do they share a common planet? Are the fighting over resources? Have they been at war for millennia?

With these uncertainties surrounding Last Survivor #1 it becomes an alright issue, rather than a truly great one. It’s likely that Yoshii was attempting to build an air of mystery around her narrative, but it really falls short. There is so little plot to speak of in the issue to begin with that it’s almost science fiction plot by rote. Even the sudden death of the female human is no huge surprise – readers knew that someone was going to die, even if we thought it was likely to be the alien entity.

In the end, Last Survivor #1 is lacking. For a first issue it does little by way of establishing a protagonist, a new race, a world or rules of the universe. This being followed up by such a strong twist in the final pages leaves little by way of narrative to look forward to in whatever form of arc or issues there are to speak of.

One cannot help but conclude that Yoshii was more concerned with the artist aspects of her storytelling in Last Survivor #1 because her story is slap dash at best. It is good at what little there is by way of story, though nothing more than that to be gleaned.

Where is writing is lacking Lynne Yoshii is a talented artist. For its predictable brutality Last Survivor #1 is lovely with a distinct painterly quality to it. Manga influences are strong in Yoshii’s design of the human female and the large doe eyes make her appear innocent – easy to mistake for the protagonist, certainly by design. There are many stylistic similarities in Yoshii’s work an character designs to the art of Tales of Honor from Top Cow, a series that touches on similar themes of science fiction as well.

Yoshii’s alien race are quite similar to the Xenomorphs from Alien. They are aptly executed, but on top of the plot comparisons to be made about Ripley it does seem troubling that Yoshii elected to take another design cue from this classic series. If readers look at the series too long it begins to look like thinly veiled inspiration indeed.

Last Survivor #1 doesn’t have much going on by way of settings, the ship looks like a ship with nothing aesthetically unique about it. It’s competently designed, but lacks any real spark. It’s a pretty book despite taking cues from various stories that have come before.

BOTTOM LINE: COMPETENT IF NOT CREATIVE

Last Survivor #1 is pretty and it has one good moment in 15 pages. There’s just not that much going on, unfortunately.

Last Survivor #1 hits the beats a science fiction story is supposed to with one neat moment at the end.