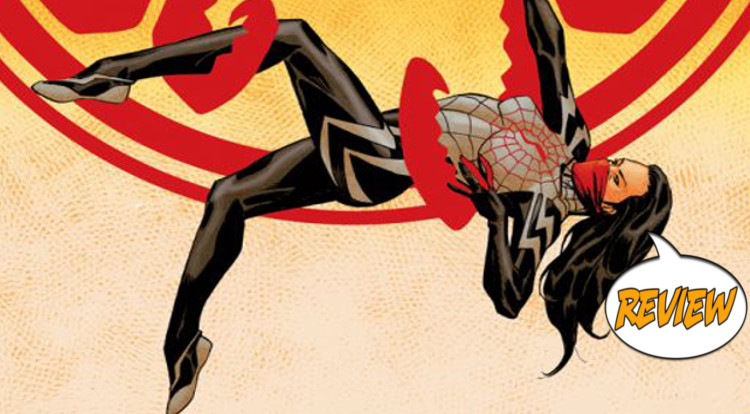 Silk #2 gives readers a real sense of what kind of hero Cindy Moon is shaping up to be and how pervasive the mysterious threats that are following her around are. Previously in Silk #1: Silk got herself situated after the events of Spider-Verse.

Silk #2 is a great issue because Robbie Thompson has finally nailed Cindy Moon’s voice. With most of the character-based exposition out of the way in the previous issue Silk #2 really gives readers a sense of who our heroine is. She’s insecure, although in a very charming way, and that manifests itself in various aspects of her life throughout this narrative.

Thompson frames the beginning and the end of Silk #2 with Cindy’s internal monologue and how that is going to work in conjunction with her Silk sense. It turns out that even having a pre-cognitive innate ability doesn’t mean that she’s good at it. There same joke about “It’s right behind me, isn’t it?” pops up twice and it is charming and disarming that reader get the opportunity to learn about and assimilate this new character as she goes through the same growing pains with her role as a superheroine.

The inner monologues throughout Silk #2 is also the first time when Cindy feels like a real person. Thompson has nailed her voice and she reads as believably female – which, as a female reader, is nice to see – and believably young (i.e. inexperienced), given the amount of time she has spent apart from society. Readers also get to see just how affable Cindy Moon really is outside of her identity as Silk.

Silk #2 is not a romance story, it doesn’t not even have a romantic through line, but early on in the issue readers get a glance of the last boy she dated and the circumstances surrounding her breakup. The only reason Thompson manages to make this plot point interesting rather than drab is by having Hector the ex-boyfriend reappear when Cindy is in her most embarrassed state later on. It’s disarming to the readers, just as it disarms Cindy, and it’s a nice moment. Vigilante characters often need moments of emotional massage in order to allow readers to have pathos for them and Thompson truly nails the subtlety of that in the pages of this issue.

The mystery of who is stalking Cindy and sending obstacles after her continues in Silk #2 with no more hints that readers were left with in the previous issue. This does allow for some awesome fight scenes to take place and for Cindy Moon to further develop as Silk in her vigilante persona. Readers do get a chance to see just how invested in the various aspects of our protagonist’s life they are, but what they are driving at remains a mystery to be unraveled in the pages of coming issues.

Silk #2 is really a lot of fun and ought to have been the first issue, but it’s nice to have something fun and world building this week.

Stacey Lee is a great artist and I love what she puts on the page in Silk #2. Her style is manga-influenced, although much more Westernized, and nicely hints at Cindy Moon’s Eastern origins. Silk and Cindy are both lovely and deadly and they own the space they are in – even as an intern for the Bugle Cindy does not fade into the background.

Lee gives the vigilante persona in Silk #2 ninja-esque poses that cement her in a truly unique fighting style from Spider-Man and helps to establish her as a legitimate heroine. She also pencils the McGuffin threat in a very interesting way. The battles make for fun, fun reading.

Silk #2 is visually distinct and doesn’t rely on any visual cues or laurels that would draw comparisons to the main title it is derivative of and Stacy Lee deserves a ton of credit and respect for that.

Silk #2 is a great issue. It brings the strength of character, narrative and art that I was looking for in the first issue and is something I want to see a lot more of.

Silk #2 really finds its feet and presents Cindy Moon as a strong heroine both in and out of her vigilante persona.