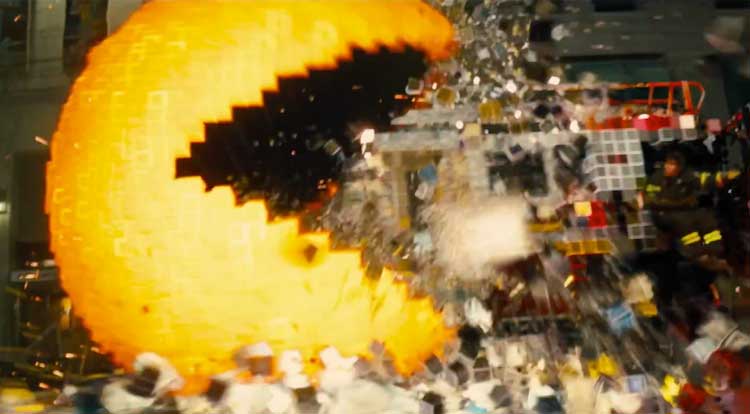 Ready for a new Adam Sandler/ Kevin James comedy? What if it features classic video game characters? Check out the first trailer for Pixels.

This summer, it’s game on or game over! When aliens misinterpret video feeds of classic arcade games as a declaration of war, they attack the Earth in the f…

Based on a short film by Patrick Jean, Pixels will follow the likes of Sandler and James along with Peter Dinklage, Josh Gad, and others face off against an alien invasion that is using our favorite video game characters against us.

Many have drawn comparisons to the upcoming Sony film to the Futurama episode Anthology of Interest 2, specifically the portion titled Raiders of the Last Arcade. During that What If? sequence, Nintendo characters lead by Donkey Kong are attempting to destroy New York City.

Similarities can certainly be drawn from that episode to Pixels, especially when you also take a look at the short film from Patrick Jean that Sony acquired to make the film.

Sony also announced that Pixels is now their most streamed trailer in a 24 hour period of all time with more than 34 million views. Pixels took the throne of most streamed from The Amazing Spider-Man 2 which brought in 22 million views in its first 24 hours. Sony must have used an amazing social media marketing strategy for Pixels because this film certainly doesn’t have the name recognition that Spider-Man does.

What do you think about the trailer? Think that Sandler and the cast are the right people for the story? Give all your thoughts below!