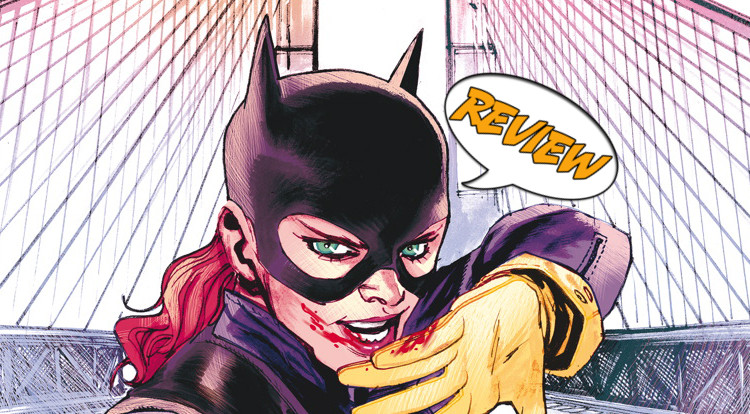 Batgirl Endgame #1 shows Barbara Gordon in a true moment of heroism in the Battle for Burnside Bridge as the Endgame virus makes its way across Gotham. Brenden Fletcher and Cameron Stewart absolutely nail it in Batgirl Endgame #1. This issue is the very best this new Barbara Gordon Batgirl have ever been. She is truly heroic throughout this issue and the writing team executes her actions with absolutely no dialogue. It’s a strong choice that falls into place beautifully and truly exemplifies why Batgirl is a heroine of great import who matters. Given the current shifting climate toward representation and diversity in comics it is also lovely to see a comic issue about a young woman so well represented by two make writers.

At the opening of Batgirl Endgame #1 the titular character is watching her new neighbourhood fall apart. Those infected with the Endgame virus have filled the bridge out of Burnside like a zombie plague and are violently attacking those who’ve not yet fallen under that spell. Barbara notices a young girl (who also happens to be a character of colour, which is another great step in the battle for representation), that obviously needs aid, but she has no way to get to.

In order to keep from drawing attention to both herself and the little girl, Batgirl mimes a plan of action to the child. It’s an interesting choice on Fletcher and Stewart’s behalf in Batgirl Endgame #1 because none of the words from their script make it onto the page in its final incarnation. It’s not a wholly original idea, it’s been done before, but it works incredibly well here in serving the overall purpose of the narrative being told. Not only do readers get the opportunity to see Batgirl representing heroine-ing at its finest, but she empowers a younger, weaker character into channeling the bravery she is possessed of in order to save herself.

More than being a heroine in Batgirl Endgame #1, Barbara becomes a beacon. Fletcher and Stewart have her literally above the crowds. At first glance this is a merely strategic advantage, but when readers take a step back, they have placed her against the sky as a beacon of hope to those characters – like the aforementioned little girl – who need her and need assurance that they will make it through yet another horrific event that has befallen Gotham City.

Additionally, Batgirl Endgame #1 furthers an idea set up by this same writing team in the pages of Batgirl #40 (also out this week), that Frankie may take over Barbara’s previous role as Oracle. Throughout the issue Frankie is in a separate location from Barbara – presumably outside the city limits and, thereby, the reach of the Endgame virus – while, at the same time, feeding Batgirl information via various technological communication devices. Frankie’s intel enables Barabar to create a plan of attack for not only kicking some Endgame zombie butt, but bringing the child to safety.

Batgirl Endgame #1 is a stunning realization of what this new Batgirl series can be. The darkness and grit that readers have come to expect from Batfamily books is deftly balanced with her headstrong behavior and the new team she is building around her in her main title. It reads very quickly, its executed with great aplomb and is easily the best story turned out by the new writing team to date. Run out and pick it up, you won’t regret it.

Bengal steps into the role of artist in Batgirl Endgame #1 and he absolutely runs away with it. This issue is absolutely beautiful in the horrific circumstances the narrative deals with. Characters like Barbara and Frankie are reminiscent of Babs Tarr’s style, but they are just executed with so much more aplomb than the regular title. Bengal is a French artist and he brings a certain whimsical quality to the female characters that is both lovely and strong. Batgirl’s punches and kicks seem to land a lot more solidly in the panels of this one shot than the pages of her regular title.

As with any great Bat-title, Gotham City is very much a character in and of itself under Bengal’s pencils in Batgirl Endgame #1. The city is hulking and dirty and very much gives off the sense that it is sick and suffering under the Endgame virus. Although she is coloured in the purples and greys that readers expect of her, Batgirl is the white blood cell that appears to cleanse the body of Burnside in these twenty-two pages.

The colouring that Bengal brings to Batgirl Endgame #1 has a little more of a water colour quality to it than the colouring from the main title and that definitely lends the sense that this story all takes place within a cloud of infection. It’s well-managed and never treads into the realm of fantastical or storybook the way water coloured comic books can feel. This difference aesthetic in every way adds to the Batgirl Endgame #1 narrative and cements it as just visually lovely in all facets.

Batgirl Endgame #1 is leagues better than I expected it to be, it is the fully realized vision of what this new incarnation of Barbara Gordon can and should be. The framing device is compelling and the art is gorgeous. Read it!

Batgirl Endgame #1 is a realization of what this newest incarnation of the character can be on top of being stunning to look at.