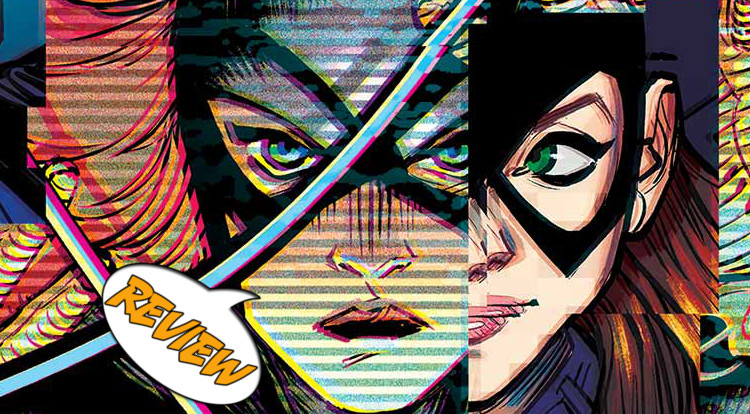 Batgirl #40 sees the revelation of Batgirl’s enemy and begins to build a new team of female vigilantes in a great wrap up to this recent arc. Previously in Batgirl #39: Batgirl loses the love of Burnside.

HER OWN GREATEST ENEMY

Many details that the writing team of Brenden Fletcher and Cameron Stewart have been dropping throughout their first arc pay off in the pages of Batgirl #40. This issue is a very strong end to a mixed bag of an arc. For the first time since we met her, Barbara’s roommate/best friend Frankie really pays off and readers get the sense of why she matters in addition to what she has to offer to the series as a whole. Readers also get a glimpse of just how far the titular character has come in her own emotional development as a person and as a vigilante.

Further to Frankie, in Batgirl #40 readers learn that she and Barbara met in the hospital and went through a lot of recovery/physical therapy together and that Frankie has stood by Barbara during her darkest days. Readers have been told from the beginning that Frankie is very smart and a talented programmer, but in this issue that pays off in a real way. Not only does Frankie prove herself to be a brave and loyal friend to Barbara (even when she’s under the mask of Batgirl), but toward the end of the issue she manages to salvage a piece of technology that is very important to Barbara and has suffered from corruption. Fletcher and Stewart ought to have parsed some of this awesomeness out earlier in the series, but it really pays off here. Frankie finally feels like a real person, she affable and she’s earned staying power in the future of this book.

Batgirl #40 reveals Fletcher and Stewart’s villain – Barbara herself! Since she entered grad school Barbara has been struggling to regain a lost program she initially built during her time in therapy – where she first met Frankie. The aforementioned program has been lost only to have secretly been reasserting itself by trying to reclaim ownership of Barbara’s body. It’s a touch too meta to have Batgirl’s enemy be an outward representation of herself, but it mostly works here. The great thing about this narrative device from Fletcher and Stewart is that readers get the chance to see just how much the character has blossomed into a new person since Gail Simone’s overly gritty incarnation.

Additionally, this villainous manifestation in Batgirl #40 forces Batgirl to rally the troops around her. Dinah/Black Canary gets an awesome moment that teases the kind of things readers have to look forward to in her upcoming solo title post-Convergence. At the same time Frankie further illustrates her technology skills by slipping almost seamlessly into the role of Oracle that Barbara herself used to fulfill. By the end of the issue readers are left with the sense that Batgirl, Black Canary and Frankie (who hasn’t named herself Oracle, but mentions that she does have a name in mind), may be poised to reform the Birds of Prey.

Fletcher and Stewart have done a great job with this issue, it’s solid and holds a ton of promise for the future. More stories like this, in this tone with these versions of the characters are something to look forward to with great anticipation.

Babs Tarr has really come into her own in this first arch of the series and it pays off, mirroring the narrative, in the pages of Batgirl #40. The characters are beautiful and feminine even in their suffering and when we get sweeping looks at a square in Gotham or a group of people it is like looking at a real location. Tarr’s pencils are really, really solid in this issue.

Where she really excels in Batgirl #40 are strange story moments that highlight the scale of attack Barbara’s rouge technology is about to unleash on a group of ignorant bystanders. Tarr offers readers a 1984-esque glimpse into the warped mind of the villain program, enabling the writing team to raise the stakes in the words that are put on the page and shape the scale of danger that Batgirl is willing and able to tackle on her own.

Batgirl #40 looks good, it feels dangerous and it a rewarding end to readers that have stuck with the ups and down in this first arc.

Batgirl #40 sets up a lot of cool things for the future of this series, it wraps up plot points that have been dropped along the way and looks good doing it. It’s worth taking a look at.

Batgirl #40 is a great ending to this first arc that pays off so many plot points that have been dropped along the way.